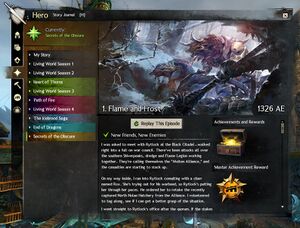 The Story Journal is a tab on the hero panel that tracks and displays character progress through the narrative of Guild Wars 2. The journal has section for the personal story and each season of the Living World. Each section is further divided into chapters and episodes for the personal story and Living World respectively. Each chapter or episode is further divided into a series of instances that are completed sequentially.

To switch between stories or to replay an episode, simply select the story or episode in the journal. Incomplete stories will show a button to "Switch to this story," while completed episodes will show a button to "Replay this episode." These actions will replace your character's currently active story, and you will lose any progress you had made in the current chapter of that story. Please note the Personal story can not be replayed.

While replaying episodes, you can progress through the episode as if you were playing it for the first time, following the objectives indicated by the

icon. These chapters contain special achievements that are only available while replaying the episode.

During gameplay there will be a variety of different decisions the player can make when they resolve different situations, resulting in splitting the storyline into multiple branches. 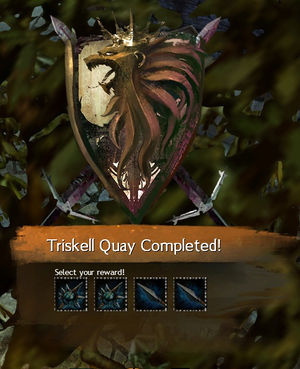 Reward screen for completing a part of your personal story

The choices made throughout the game will affect the appearance and services in the character's home instance as they progress through the story. The choices will be recorded in each character's individualized Story Journal. Players following the same storyline who assist you in yours can choose to accept the same outcome or replay the mission to make their own choices.

Enemies within story instances will drop no loot. Rewards are given at the end of the mission.

All missions reward experience and coin, but other rewards vary depending on story progression. All missions will have a similar selection of rewards at their equivalent points of the story for the same profession regardless or race or story choices. Here are some examples of such rewards:

My Story follows the character through the personal story of Guild Wars 2. The story details the humble beginnings as a local hero to commander of the Pact in the fight against Zhaitan. The story is split into eight chapters. The story as a whole must be played through in order, and no part of the story can be replayed.

Chapters 4-6 follows your character's progress through the ranks of his or her chosen order. During these chapters, your character will recruit one of the minor races to fight against Zhaitan and participate in the major battles on Claw Island.

Chapters 7-8 begins with the formal creation of the Pact, who then advance through Ruins of Orr while preparing for the final assault on Zhaitan.

The story journal was introduced after first season was complete and is not available in the journal. ArenaNet has noted plans to add the season at a later date. Season 1 begins the tale of Tyria after the defeat of Zhaitan, and deals primarily with Scarlet Briar and the alliances she formed between the various hostile factions of Tyria. Her plans culminate in an attack on Lion's Arch, with the intent of disturbing a major ley line which lays underneath the city in order to complete the awakening of the Elder Dragon Mordremoth. 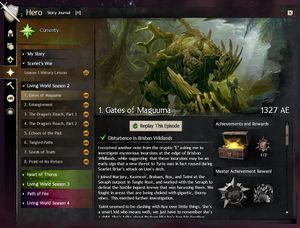 Season 2 begins with the sabotage of the Zephyr Sanctum over the remote region of Dry Top. While the Commander investigates the crash site, Mordremoth's power grows until it threatens all of Tyria.

The first expansion, Heart of Thorns, starts where Living World Season 2 left off, and follows the Commander's trek through the Heart of Maguuma to find missing members of Destiny's Edge, tracking Caithe and Glint's Egg, and the fight against Mordremoth.

Season 3 begins with a memorial to Eir Stegalkin and the return of the White Mantle. While the Commander investigates Minister Caudecus's disappearance, they are met with the return of the mursaat Lazarus and the rising activity of multiple Elder Dragons.

The second expansion, Path of Fire, sees the Commander travel to the long-isolated desert realm of Elona to prevent Balthazar, the human god of war, from killing the Elder Dragon Kralkatorrik and destroying the world.

Season 4 begins with regrouping with Dragon's Watch before a brandstorm strikes Amnoon. While part of Dragon's Watch keeps tabs on Kralkatorrik's actions, the Pact Commander finds themselves facing off against Palawa Joko's forces.