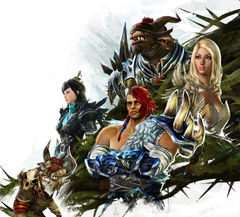 Dragon's Watch is an adventuring guild in Tyria dedicated to stopping the Elder Dragons. While members started to work together starting from the year 1326 AE in response to the events of Flame and Frost, it would be the year 1329 AE when Dragon's Watch was formally created to succeed Destiny's Edge. The group was founded by the Pact Commander and Rytlock Brimstone.[1]

The current members are: