This article is about the world. For the continent, see Tyria. 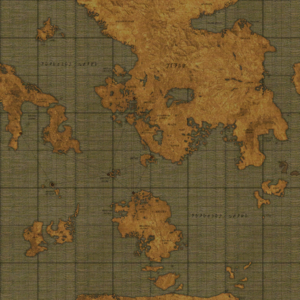 World map as seen in the Durmand Priory library.

The world Tyria (called Thyria[1] in ancient Krytan), not to be confused with the continent of the same name, has been the home of many sentient species, such as the humans, asura, dwarves, and norn, among others. Known history puts it over 11,000 years old, when giganticus lupicus last roamed the world. However, the earliest known human life did not appear until 786 BE.[2] There are three known continents, and an unknown number of unexplored ones. Beneath Tyria runs a subterranean network of tunnels, linked by asura gates.

Tyria is only one world among many in the Mists. It is a very large world, but history has only chronicled events that have taken place on three major continents; these continents are Tyria (named for the world), Cantha, and Elona.

The true age of the world is unknown, with the oldest records dating to the approximate extinction of the Giganticus Lupicus in 10,000 BE. This was the period of the Elder Dragons' last time awake in which they drove the Giganticus Lupicus to extinction. Few records exist of that time, as only five major sentient races are known to have survived—the dwarves, Forgotten, jotun, mursaat, and Seers—although the kodan also appear to have tales of having lived through a previous dragonrise with less magical races.[3] Of the five major races, only the dwarves and jotun kept records, but since then all five races' cultures have fallen into ruin and only the jotun remain, though as savage, primitive forms of their ancestors.

Although the mursaat ultimately betrayed the alliance by warring against the Seers and fleeing into the Mists, the Seers successfully stored the surviving magic in the world into the original Bloodstone to shield it from the Elder Dragons.[4] Glint, scion and champion of the Elder Dragon Kralkatorrik, was freed from her master's influence via a Forgotten ritual and eventually rebelled against him by hiding the surviving races of the world from the Elder Dragons who gradually fell into slumber to wait for the levels of magic to rise again.[5]

At some still-unknown point in the past, powerful beings known as the Six Human Gods traveled to Tyria via entering the Artesian Waters of Orr, bringing humanity with them and ushering a new age. Under the guidance of Balthazar, the God of War, humans spread and conquered lands across the world.[6] The oldest known nation of humanity was Cantha—first settled in 786 BE.[2] In 205 BE, humanity traveled to the northern continents of Tyria and Elona, and established the kingdom of Orr and the Primeval Dynasty in their respective continents with some subtle suggestions that other, less known human nations were founded elsewhere as well.[7] Encouraged by Balthazar, humanity continued to spread across the world, waging wars with the native inhabitants and pushing them from their lands. In time, they established Ascalon in the land previously conquered by the charr and created many settlements in Kryta.

In 1 BE, Abaddon, the God of Knowledge, used the Seers' Bloodstone with other gods to grant magic to all the races of the world. However, this gift backlashed as wars between the races and people grew and intensified. King Doric of the Tyrian human kingdoms pleaded to the gods to take back their gift, and to do so the gods sundered the Bloodstone into five pieces—each representing a different school of magic (Aggression, Denial, Destruction, and Preservation) as well as a keystone required to reunite the Bloodstones into one again.[4] They then used Doric's blood to seal the magic and dropped the Bloodstones into Abaddon's Mouth, the largest volcano in the Ring of Fire islands.[8] Magic remained in the world, but greatly reduced in its power and efficiency.[9]

Abaddon disagreed with removing magic, however. After receiving a plead for aid from his zealous Margonite followers who were hunted by the Forgotten armada due to committing crimes of killing servants of other gods and defaming god statues in the Temple of the Six Gods, Abaddon sunk the pursuing Forgotten ships and rebelled against the other gods to further his own ambitions, transforming the surviving Margonites into demonic followers to wage war on his behalf. The resulting clash between the gods transformed the Crystal Sea and a verdant Elonian landscape into the Crystal Desert and the Desolation, respectively. Following Abaddon's defeat, the five gods sealed him and the Margonites in the Realm of Torment with several Forgotten acting as their wardens. Because of the devastation the war had caused, the gods left the world in the Exodus of the Gods.

While imprisoned, Abaddon continued scheming and used his servants to cause catastrophes such as the Searing of Ascalon and the Cataclysm of Orr which devastated their respective landscapes. In 1075 AE, over a thousand years after the Exodus, Abaddon attempted to usher in Nightfall to merge Tyria with the Realm of Torment and thus allow himself to be released from his prison.[2] Some areas of Elona suffered the effects of Nightfall although Abaddon was ultimately defeated by a group of heroes, including Spearmarshal Kormir who ascended to take Abaddon's place in the pantheon and save all of Tyria from being ravaged by the fallen god's rampant magic. However, the temporary spike in magic lasted long enough to stir the Elder Dragon Primordus from its millennia-long slumber, leading to the latest cycle of dragonrise with the rising of Primordus in 1120 AE.[10]

According to a New Krytan-labelled world map found in the Durmand Priory library, the world of Tyria is comprised of several large landmasses, chief among which is a supercontinent also named Tyria. The supercontinent contains the familiar continent of Tyria as well as Elona (although these two together only make up about a quarter of the supercontinent).

To the south is the continent of Cantha whose north coast has undergone dramatic changes from 250 years ago. There are seemingly inland lakes throughout Kaineng City, possibly relating to the Great Tsunami. The Jade Sea does not, from the map, appear to have reverted to water as expected by some Canthan scholars. However, this is now known to be mostly inaccurate, aside from the Jade Sea remaining as solid jade.

The Priory's map also contains several other islands and continents, some of which are labelled in New Krytan. However, most of these labels seem to be descriptive rather than actual place names, as in many early world maps.

Interestingly, Lion's Arch, Kaineng Center, Kamadan (which has since been renamed Palawadan, Jewel of Istan in honor of King Palawa Joko), and the Great Temple of Balthazar are all marked on this map, as well as two unknown locations to the west: one (apparently underwater) in the middle of the Sunken Islands, and the other nearest to the label reading Sunrise Crest. These have been speculated to be, like the other labels, existing or former port cities.

The jotun were the first species known to try to catalogue the night sky above Tyria. In the book Rising Stars, an interpretation of an ancient jotun writing, the translator states their belief that the text says the constellations themselves are altered by the awakening of Elder Dragons. This is seemingly corroborated by Varra Skylark's discovery of the Mystic Telescope in Arah.[11] Many years ago, the mysterious and cantankerous traveler Bahltek described something similar of the Six, saying, "The gods can be seen in the heavens... to varying degrees. They've emblazoned their marks upon the firmament, and these marks are not constant". Istani astronomers made claims that the stars hold prophecies of the future and even foretold events such as Nightfall.

Dwayna's Heart is a star visible in the sky above Tyria which doesn't move, akin to the North Star.

The World of Tyria
Retrieved from "https://wiki.guildwars2.com/index.php?title=Tyria_(world)&oldid=2349533"
Category: