From Guild Wars 2 Wiki
Jump to navigationJump to search
Spoiler alert: The following text contains spoilers relating to The Ruined City of Arah (explorable), Bastion of the Penitent and Living World Season 3. 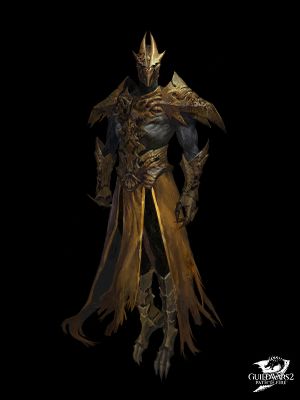 Concept art of Lazarus the Dire by Naomi Baker.

The mursaat were an ancient, terrible race of spellcasters, that, until recently, had not been seen for hundreds of years and are now extinct. Once known as the Unseen Ones, they could use their magic to slip beneath the skin of the world, phasing between Tyria and the Mists.[1]

The mursaat were a race of floating humanoids with powerful magical abilities. They had elongated toes and long black feathers emerging from their backs, and usually wore golden armor. There were no mursaat fighters, instead they had powerful Jade Constructs that were capable of defending them when their magic was not enough and served as their foot soldiers.

The mursaat were exceptionally powerful spellcasters who had retained their magic despite the creation of the Bloodstone, having fled the world before its creation. This had made them especially dangerous. Of particular note was their most devastating ability, Spectral Agony, which could kill an unprotected target incredibly quickly, and their powerful magic to shift themselves out of phase with the world that rendered them invisible to any without the Gift of True Sight.

The mursaat presence in the continent of Tyria was centered around Glint's Flameseeker Prophecies which foretold the death of their race. They went to great lengths and committed great atrocities to prevent the prophecy from ever being fulfilled; erecting great fortresses of dark jade on the Ring of Fire islands, and using Saul D'Alessio and his White Mantle followers as pawns in seizing control over Kryta in order to find and slay the Chosen to keep the Door of Komalie shut. The mursaat were depicted as cruel beings due to the fact that they refused to cooperate with the other ancient races, were selfish and cowardly people, were only concerned with preserving themselves and exploiting others to do their dirty work, and were living in hiding in a half-world.

One of the few distinguishable features of mursaat culture was their jade architecture which could be found wherever they wished to establish a position of power, such as in temples dedicated to them. The mursaat were capable of establishing great fortifications of dark jade—magical defenses and portals—and were especially known for their towers. Their magical constructs would also carry a fraction of their agonizing power, and were elaborate and powerful enough to the point that they could act on their own and possess unique skills.

As one of the so-called "elder races", the mursaat's influence stretches far back into ancient history, to the time of the Great Giants, when magic was wild. 10,000 BE, when the Elder Dragons last roamed the surface of Tyria feeding on its magic, the mursaat allied with the other surviving races—the dwarves, the Seers, the jotun, and the Forgotten—in order to find a way to stop the dragons. The Forgotten and the mursaat fought together against Zhaitan but failed due to lack of support from the other races.[2] Realizing the Elder Dragons to be too powerful a threat to defeat, the elder races agreed to give their magic to the Seers, who would seal it within a Bloodstone, starving the dragons.

However, the mursaat had found a way to become invisible and to literally become out of phase with Tyria. Angered by the other races' refusal to help them and the Forgotten against Zhaitan and wishing to rule the world in their own image, the mursaat betrayed the other races and left them to rot, keeping their own magic and fleeing into a half-world.[2] Some time later, at the time of writing of the Tome of the Rubicon, they warred with the Seers, nearly wiping out the race.[3]

In 272 AE, the dragon Glint compiled the Flameseeker Prophecies which, among other things, foretold of the demise of the mursaat at the hands of the titans. From this time, the mursaat's priorities shifted to preventing this eventuality from coming to pass.

The mursaat reveal themselves to Saul D'Alessio.

The mursaat did not resurface until relatively recently, secretly establishing the Bastion of the Penitent deep in Woodland Cascades for important prisoners from different races whom they tortured to mold them to their liking.[4] In 1070 AE, during the charr invasion, the exiled Krytan Saul D'Alessio stumbled upon a city of massive towers reaching into the heavens with alabaster and golden filigree—a mursaat city.[5] Saul, awed by its denizens, returned to Kryta a changed man with the mursaat's blessing as they viewed him as the perfect tool to enact their plans. Before long Saul and his White Mantle took power from the kingdom's disgraced crown with the mursaat, who remained invisible to all but the Mantle's most devoted, controlling things from behind the scenes.

The mursaat answered Saul's prayers and appeared in battle to help his forces drive back the invading charr. Three of the mursaat—Optimus Caliph, Mercia the Smug, and Lazarus the Dire—appeared and decimated the charr with their devastating magic and in so doing saved Kryta. However, their assistance came at a price. After destroying the charr, the mursaat turned on Saul's squad, who had moments earlier worshiped them as their gods, and murdered most of them as the Unseen Ones did not wish to be observed by anyone except the most devout. Only a handful of the most zealous White Mantle in the squad survived the unexpected treachery. Realizing Saul's changed attitude at the sight of the massacre and to keep him from telling the Krytan population what he had seen, the mursaat took him with them.[6]

Following his disappearance, Saul was elevated into a martyr and a hero of Kryta by the new White Mantle leadership under Confessor Dorian who spread a lie that Saul had died in the charr ambush. The White Mantle grew into a religious cult dedicated to the Unseen Ones and ruled Kryta although the unseen hand of the mursaat was guiding the actions of their leaders who alone were aware of the Unseen Ones. Following the mursaat's instructions, the Confessor and the conclave had the White Mantle use the Eye of Janthir to find gifted people among the Krytan population and bring these Chosen to the Maguuma Bloodstone in Bloodstone Fen where the selected group was sacrificed in order to keep the Door of Komalie shut.

When it was discovered that the White Mantle were keeping the titans at bay by performing annual sacrifices of Chosen atop the Maguuma Bloodstone, the Scepter of Orr was stolen from the Temple of the Unseen by the Shining Blade rebel group, beginning the Krytan Civil War. A group of Shining Blade, having Ascended and thus gaining the Gift of True Sight, were able to bypass the mursaat's invisibility and could, with the aid of one of the few remaining Seers, partially shield themselves from their Spectral Agony. The mursaat were driven out of the Shiverpeak Mountains and the titans were released, breaking the mursaat's stranglehold on Tyria.

When the titans first emerged from behind the Door of Komalie, one of the mursaat called Lazarus the Dire survived by splitting himself up into several aspects and sealing them within members of the White Mantle, disguising them as blessings. Six years later, after the threat of the titans had passed, Lazarus returned to reclaim these aspects, finding that reclaiming them killed their hosts. The host of the final aspect, Justiciar Naveed, sought the help of the asura Glayvin in the desperate hope that they could remove the aspect without the loss of his life. This was not possible, however, but they did manage to damage the aspect. When Lazarus absorbed it into himself, its power turned on him and severely wounded him. Lazarus fled, vowing vengeance on "countless generations".

Not long after, the final few resisting mursaat were killed in the Battle for Lion's Arch. As centuries passed, the mursaat were believed to be extinct, even by leading experts on mursaat history in the Durmand Priory. However, those same experts did admit that the mursaat tended to reappear when they were finally believed gone for good.

In 1329 AE, nearly a year after the death of the Elder Dragon Mordremoth, the White Mantle reemerged from the Stronghold of the Faithful deep within the Maguuma Jungle. "Operation Rebirth" headed by High Inquisitor Xera was revealed, ushering in the revival of Lazarus. Days later, the Maguuma Bloodstone within Bloodstone Fen exploded, releasing its magic to be absorbed by an unknown individual. Following the chaotic aftermath Lazarus showed himself, fully healed, before the White Mantle and Confessor Caudecus Beetlestone whom he then deemed a heretic.

Shortly after, as Glint's Egg hatched in Tarir, Lazarus appeared to defend the newborn dragon against Primordus's Destroyers. He somehow knew of the egg, Tarir, and the attack. He offered an alliance with the Pact Commander, claiming to have learned from past mistakes.

However, Caudecus's journal, which had been recovered during a raid on his manor, claimed that Lazarus could not have been revived because one of five relics containing aspects of Lazarus had been stolen from Xera and replaced with a fake for the ritual to revive the mursaat. The Lazarus imposter turned out to be the returned god Balthazar who imprisoned several White Mantle members and replaced them with mercenaries in his hunt for the Elder Dragons.

The real Lazarus remained out there, however. Having thought Lazarus revived, the White Mantle had scattered the five artifacts they held across Tyria. Elsewhere, the Eye of Janthir had left the Bastion of the Penitent upon the demise of the mursaat's prisoner Saul D'Alessio, and was tracking down and collecting the aspects of Lazarus. Using this, the Shining Blade had retrieved the aspects instead, including the one that had been in Caudecus's possession preventing Lazarus's earlier revival.

The final aspect was still in the hands of Balthazar, who had taken it to Siren's Landing in Orr before departing. The Eye of Janthir led the Pact Commander and Livia (then under disguise as Exemplar Kerida) to Abaddon's Reliquary where the pair used the aspects to revive Lazarus and confront him. Lazarus was slain in the battle with The Shining Blade, a powerful magical artifact of Seer origins. With Lazarus's death, the Eye of Janthir disintegrated, confirming that the last of the mursaat was finally gone for good from Tyria.

Interest in mursaat has remained in the centuries since their disappearance from Tyria. Researching the mursaat's ability to phase into the Mists, the Inquest headed by Operative Brie entered the Ruined City of Arah following Zhaitan's demise in 1325 AE to find a means to replicate the phasing ability so they could flee into the Mists and return to rule Tyria once the Elder Dragons had fallen into slumber again.[7]

Mursaat defenses continued being active in the Ring of Fire, and the White Mantle researched the jade constructs before unleashing them in the Siege of Divinity's Reach in 1330 AE. In the same year, the Shining Blade made a breakthrough in their research on the mursaat's phasing ability. Using remnants of recovered jade constructs, they created a sigil which allowed its wearer to cast a limited form of Spectral Agony as well as siphon lifeforce when near death. However, using the sigil had its risks: the longer its power was tapped into, the more it would pull the wearer into the Mists.[8]