Down the Rabbit Hole

The combat sections with the regular Branded enemies is straightforward, as all you do is kill foes and stand in white circles, and can be trivialized by using

Dragonsblood Spear whenever it's off cooldown. Preparing skills and weapons that can group enemies together will also speed up these sections.

Bug:
Dying during some parts here can potentially stall some scripts, requiring the player to restart the instance to continue.[verification requested]

Use the Dragonsblood Spear to immobilize Kralkatorik's Torment.

In order to damage the Torment, you must evade the Crystal Dragon's Fist attack and its subsequent shockwave, then use

Dragonsblood Spear to pin it down. You can then attack the fist until

Shattered wears out, or specific health thresholds are reached (70%, 40, and 10%). In the mean time, do your best to avoid Crystal Eruptors; the few regular Branded enemies can be ignored.

At 70%, follow Aurene through her portal, and make your way up the ramp, past two Branded enemies. Be careful not to step on the dark purple Brand Field that lingers under the enemies, as stepping on them is more likely to kill your character than the enemies themselves. Again, these can be easily dealt with with the Dragonsblood Spear. At the top of the ramp is the Facet of Fire and War, a manifestation of Balthazar's magic inside Kralkatorrik.

The Facet of Fire and War has the same move sets as Balthazar himself. Staying at about a 45° angle from his front will make evading his attacks a little easier. Once done, you will resume the fight with Kralkatorrik's Torment until it reaches 40% health, which leads to the encounter with the Facet of Root and Madness.

As one might guess, the Facet of Root and Madness is a manifestation of Mordremoth's magic, materializing as the Jungle Dragon's Avatar, as seen during Hearts and Minds. Despite its appearance, this mini-boss moves quickly. Hit Dodge whenever you see it jumping, so as to avoid a nasty

Knockdown; staying in melee range also lets you avoid its devastating cone attack. Lastly, do mind the Summoned Jungle Tendril Roots, as they, too, have

Knockback attacks. Success here leads back to the Torment, until it's down to 10% health, which brings us to the Facet of Shadow and Death.

In true reverse-chronological order, you'll face the manifestation of Zhaitan's magic, Facet of Shadow and Death in the form of an Eye of Zhaitan. Thankfully, this mini-boss is far simpler than the rest, relying mainly on a long, channeled attack for its damage. Defeat it and... 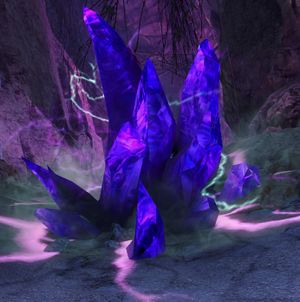 Approaching your allies
Zafirah: All four armies are swarming Kralkatorrik on Almorra's command.
<Character name>: A lot of lives have already been lost. It's up to us to make it count.
Taimi: Commander, the ley line that's feeding Kralk is due south from you.
Rytlock Brimstone: So...through that wall of solid rock.
Aurene: This way!
Rytlock Brimstone: That works.

Going deeper into the cave
Rytlock Brimstone: What is...?
Aurene: His heartbeat.
Caithe: It's faster than you'd imagine.
Zafirah: They're pummeling him from above—he's in distress.
Rytlock Brimstone: Still got some fight in him, though!
Zafirah: A wounded beast is the most dangerous.

Aurene: Can't be much farther!

After sealing the first ley line
Caithe: There! The first one's sealed!
Rytlock Brimstone: Line 'em up, and knock them down!
<Character name>: On to the next!

After sealing the second ley line
Caithe: One ley line left!
Taimi: Commander, the Branded are retreating to your location!
<Character name>: Keep all forces up there focused on the dragon!
Taimi: You got it!

After sealing the third ley line
Rytlock Brimstone: That did it!
<Character name>: Taimi, he's vulnerable! Tell Almorra to move all armies in for the kill!
Taimi: Go, go, go!

After the quake
Zafirah: Is it done? Is it over?
Caithe: At long last...
Rytlock Brimstone: Okay, where's the boom? You kill a dragon, there's supposed to be a—
Caithe: (Startled gasp)
Rytlock Brimstone: No. No. No no no no NO!
<Character name>: Taimi, what's happening?
Taimi: Commander! He... I mean, his body...it's dead. But...there's a source of power still inside him.
Taimi: Doing more damage out here doesn't affect it.
Aurene: We can't kill him. Not from outside.
<Character name>: You're saying...we need to go in.
Aurene: There's no other way.
Rytlock Brimstone: What? Through his mouth?

Before mounting Aurene
<Character name>: Just Aurene and me. If she dies in there, Joko's magic can resurrect her. The rest of you, not so much.
Caithe: But that goes for you, too.
<Character name>: We've known all along that the scion and champion must face Kralkatorrik together.
Aurene: Defend these ley lines. If he starts healing again, it's over.
Zafirah: The Branded will not get past us.
<Character name>: Rytlock... Listen—Dragon's Watch...
Rytlock Brimstone: Shut up. You're coming back.
Caithe: Aurene... I love you.
Aurene: I love you too.
Aurene: Champion, it's time!

Fighting the Facet of Fire and War
Kralkatorrik: Claim what is yours!

After defeating the Facet of Fire and War
Aurene: Now! Deal the final blow!

Kralkatorrik's Torment: THIEVES! YOU ARE MY ANGUISH! YOU! YOUR WORLD ENDS!

Fighting the Facet of Root and Madness
Kralkatorrik: Remove this impure magic from me.

After defeating the Facet of Root and Madness
Aurene: It's ready, Champion!

Fighting Kralkatorrik's Torment again
Aurene: Press on, my champion. The end is near.

Fighting the Facet of Shadow and Death
Kralkatorrik: This you have already learned.
Aurene: I no longer fear death.

After defeating the Facet of Shadow and Death
Aurene: One more blast!

After defeating Kralkatorrik's Torment
Kralkatorrik: You have laid me bare. The pain...is ebbing.
Aurene: I'm sorry it has to be this way, Grandfather.
Kralkatorrik: Child of my child...
Kralkatorrik: I only hope that you never have to kill what you love.
Kralkatorrik: Now mortal, return my blood to my heart.
<Character name>: Aurene?
Aurene: Do it.

Cinematic
Aurene: My grandfather's prophecy is fulfilled. My mother's legacy is complete.
Aurene: I can't explain what's about to happen, Champion...
(Aurene absorbs Kralkatorrik's heart and lands in front of the Commander while their surroundings turn into a vision of Tarir, the Forgotten City.)
Aurene: But I want to share it with you.
(Aurene walks to the Commander who puts their hand on her forehead as they share a bond. The Commander hesitates when Aurene backs away but watches as she raises herself in the air.)
Aurene: All of you.
(Aurene completes her ascension as her body transforms into the Elder Dragon of Light. The scene transitions outside to a seaside cliff on Dragonfall where Braham, Caithe, Logan, Rytlock, Rox, Taimi and Zafirah watch in awe as Aurene ascends to the heavens before she flies past them all like a comet into the sunset beyond the horizon with a bright flash of light. The Commander stands on the edge of the cliff, watching towards the horizon in silence as a new star lights up in the sky.)

Additional conversations with your allies
Caithe: You're not really sure though, are you? That Aurene is coming back.
<Character name>: She's an Elder Dragon now. All bets are off.
Caithe: I felt her compassion in there. As if—as if she saw someone she loved, in great pain. Was Kralkatorrik...?
<Character name>: No dragon is meant to contain that much power. Balthazar, Zhaitan, Mordremoth—their magics were tearing him apart.
Caithe: I remember. Like a bad dream. When Mordremoth— No matter. I can still feel her love. Even from here. Even now.
Caithe: Time for me to go home, Commander. Back to the Grove, where it all began. I have a great deal of thinking to do.

<Character name>: What's next for you? Now that...
Zafirah: It's simple. I serve. Wherever Aurene wants me to go, I go. I'll wait with the Zaishen until she calls.
Zafirah: The Crystal Bloom will carry the good news without me.
Zafirah: Thank you for opening my eyes, Commander. For restoring my faith. For helping me to see.

Taimi: This is huge. I have to revise my entire thesis. No, it'll be a monograph. No, wait, it'll be a six-volume treatise! Yeah!
Taimi: Um. "The Elder Dragons, reconsidered." My magnum opus. I mean, how many researchers get this kind of opportunity? Huh?
<Character name>: We'll have to rethink a lot of our assumptions. About dragons. About everything. I understand Gorrik's doing the fieldwork.
Taimi: He'll have fun! The skyscales alone are worth like a dozen papers. They are so much cooler than bugs anyway.
Taimi: Ah—wait. Think Aurene still has time for me? I have got to get a interview with her. It'll be the first chapter. Ha!
<Character name>: When you see her again—ask.

Sayida the Sly: In all my years of sailing—and plundering—I've never seen anything like this.
Sayida the Sly: You do keep life exciting, Commander. And profitable.
<Character name>: I'm glad you're getting something out of this. You've been a great help.
Sayida the Sly: Yeah. Do me a favor and keep that to yourself. A corsair's got a reputation to protect.

Bug:
Shortly after the instance starts, Aurene is supposed to appear and open up the way. She may not appear, which will force you to restart. This can happen any number of times.