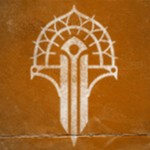 Emblem used by the White Mantle.
Stub. Key elements of this lore article are incomplete. You can help the Guild Wars 2 Wiki by expanding it.
Reason: Missing lore from Personal story and open world.

The Mursaat preyed upon the weak and impressionable, who in turn worshiped them as gods. Calling themselves the White Mantle, these converts sacrificed innocents and toppled the Krytan monarchy. The chaos they inflicted on Tyria was short-lived. They were eventually crushed, and their scattered remnants went into hiding. But pockets of their fanatical followers have been operating in the shadows ever since.

The White Mantle are a group of outlaws based in the Maguuma Wastes and northern Heart of Maguuma. Once leaders of Kryta for a brief time 250 years ago, the White Mantle view themselves as the rightful rulers of the last human nation on Tyria. With intentions to retake their role of rulership over Kryta, the White Mantle have infiltrated deep into the political system of the kingdom and stir strife across the land.[1]

Rise of the White Mantle[edit] 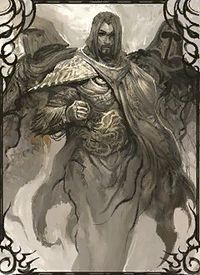 The White Mantle originated as a religious cult formed in Kryta by Saul D'Alessio in 1067 AE. Saul was a drunk and a gambler turned thief who was exiled into a deep forest and had stumbled upon powerful spellcasters whom he had called the Unseen Ones. They rescued Saul from the brink of death and returned him to Kryta, where he preached the doctrine of his new Unseen Ones as gods. Saul proclaimed salvation during Kryta's darkest hour, when the charr invasion threatened the nation's survival and when King Jadon had fled the throne.

Under Saul's leadership, the White Mantle were kind to non-believers and defenders of the weak. Saul led an small elite unit in the middle of the night to strike the charr's invading forces' leaders. Though the leaders were killed, the battle had alarmed the charr camp, and the entire charr army marched upon Saul and his few faithful. Saul prayed in the White Mantle's time of need, and three of the Unseen Ones named Optimus Caliph, Mercia the Smug and Lazarus the Dire arrived and aided them in defeating the charr.

However, this aid came at a steep cost: all but the most faithful White Mantle would perish for having gazed upon their Unseen gods. Witnessing the death of his fellow men, Saul grieved and realized the true nature of his so-called gods. The Unseen Ones took the disillusioned leader of the White Mantle with them to a remote location to ensure his silence.[2]

The survivors, becoming leaders of the White Mantle under Confessor Dorian, spread stories that Saul had valiantly sacrificed his life in the battle against the charr. With no threat and no king, the White Mantle took over Kryta.

The White Mantle grew arrogant and abusive during their reign, thriving off of the wealth of the land and leaving non-believers in poverty. Worst of all, each year Krytan citizens were chosen for "special education" and never seen again. In truth, the White Mantle offered these ill-fated Chosen as sacrificial victims atop of the Bloodstone in the Maguuma Jungle.[3]

Born from this strife, a group of rebels situating themselves in the Maguuma Jungle formed. They called themselves the Shining Blade and vowed to hack away the corruption and decay that robbed Kryta of her greatness. The true nature of the White Mantle and the inhuman sorcerers they worshiped was exposed for all to see in a series of violent conflicts that left the Mantle high council dead.[4]

However, the White Mantle remained strong and became even more ruthless under the new Confessor Isaiah who plunged Kryta into a full blown civil war. This war heightened in 1079 AE, and culminated in a battle at Lion's Arch, where Confessor Isaiah and the last of the Unseen Ones except for Lazarus were killed off. Expecting losses, Isaiah had sent many White Mantle into the depths of the Maguuma Jungle to ensure the cult's survival, and they immediately began to attempt to sow distrust against Queen Salma and the Shining Blade for the time they would one day return.[5]

Return of the White Mantle[edit]

Section-stub. This key section of the article is incomplete. You can help the Guild Wars 2 Wiki by expanding it.
Reason: Missing White Mantle involvement from human Personal Story.

Fall of the White Mantle[edit]