This article is about the Living World Season 1 story step. For the historical Season 1 dungeon, see Scarlet's Playhouse/historical.

Preceded by
Clockwork Invasion
Followed by
Picking Up the Pieces 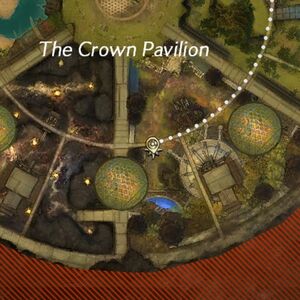 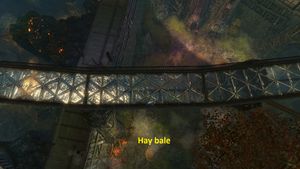 Rox: Okay, now that we're in, our first order of business is to find and free the hostages.
Rox: Captain Thackeray is counting on us. Impress him, and Rytlock takes notice. Ready, Braham? Ready, Frostbite?
Braham: You know I'm ready. I can't speak for Frostbite. Then again, neither can he, because he can't talk.
Rox: He talks. You just have to know how to listen. Right, boy?
Frostbite: (purr)
Rox: See? Frostbite's ready. Let's show Scarlet what happens when you mess with our human pals.
Scarlet Briar: Look who's there! But you didn't pay the entry fee. Bouncers! Do your stuff!

Talking to allies at the start:

Scarlet Briar: But I didn't make enough dinner for guests! Quick, someone toss another hostage into the pot.
Rox: Ears up, Braham. There's something ahead.
Braham: I see it, and it's not just something: it's the thing.
Rox: The hostages?
Braham: And a bunch of those ugly mechanical baddies. One king-sized pile of scrap metal, coming right up!

Upon reaching the platform with Lord Faren:

Lord Faren: Ah, hello? Anyone? Fire! There's a fire. A noble lord's lifelong gratitude is just a rescue away.
Scarlet Briar: Do come in. There's no room at the dinner table, but plenty of room in the cauldron.
Lord Faren: I sincerely hope you're an off-duty firefighter, because I sincerely don't want to be cooked.

Scarlet Briar: Fine, take the hostages. I was done with them anyway. Stupid hostages.
Lord Faren: Am I glad to see you! Help a nobleman out of a bad situation, will you? That sylvari with the fright wig is all kinds of crazy.
Braham: Are you hurt?
Lord Faren: Not seriously. Not yet. Scarlet likes to play with her toys, and let me tell you, she plays rough.
Lord Faren: The others are in pretty bad shape. I've been held captive before, but this is easily the scariest hospitality I've received.
Rox: Okay, we'll stay with you until we can get you all to safety. Anyone who can't walk, we'll carry.
Braham: And any of Scarlet's machine goons who come looking for poor, defenseless you will find us instead.

Upon the first encounter:

Scarlet Briar: Careful now. Death by cannonball would be funny, but killing you myself is actual fun.

When Scarlet got hit by a blue cannonball:

During the first encounter:

When Scarlet is defeated:

Upon the second encounter:

After the second encounter:

Scarlet Briar: Well, the club's just not doing it for me. Time to find something else to beat you with.

Talking to allies before heading to the center:

Rox: I'm going to wait with the survivors and make sure the get back to the surface in on3 piece.Go on ahead, Braham will back you up once the Coast is clear.

Braham: Save a little bit of fun for me, yeah? As much as I want to help teach Scarlet a valuable lesson about norn aggression , I need to hang back and see that the survivors get out in one piece.

Lord Faren: Your friend Braham humbly offered me his shirt,but I declined.I still need to cool off from the hot steam of that cauldron...

At the start of the final encounter:

Scarlet Briar: Well, well... The rats scurried out of the sewer. Nice to finally put a face to the tail.
Scarlet Briar: It's a shame the queen forced my hand, but I must say: you're quite the dance partner, "Commander."
Scarlet Briar: This is something I didn't anticipate, and while I love a bit of exceitement...
Scarlet Briar: I urge you to desist.

During the final encounter:

After the final encounter:

Scarlet Briar: The music swells...
A giant Twisted Watchwork bomb slowly fills the arena.
Braham jumps in and creates a barrier.
Braham: I've got your back.
The bomb goes off, leaving Scarlet on the ground.
Scarlet Briar: Alas, you have defeated me! And thus I have learned the error of my ways. I shall be good and sweet and nice from now on.
Scarlet teleports to the distance.
Scarlet Briar: Now you've got my full attention.
Scarlet Briar: I keep a list of people who need sharp reminders about how insignificant they are.
Scarlet Briar: Do not get in my way, little pest. There will be consequences.
Scarlet teleports away.
Rox: Figures a schemer like Scarlet would have an escape plan. Still, we put her to flight, and that's a win in my book.
Lord Faren: Wait, that lunatic is still on the loose? That's not good. Not for Divinity's Reach, or the queen, or...anyone, really.
Lord Faren: Speaking of royalty...did the queen notice how brave I was right before I got captured? I'm looking for an upside here.
Braham: You're alive and intact, my lord. That's more of an upside than most of her victims got. Savor the little things.
Lord Faren: Still, she doesn't strike me as the kind to forgive and forget. More like the kind to begrudge and bedevil.
Rox: True. But that just means we stay prepared for anything.
Lord Faren: How do you prepare for wild-eyed, tooth-gnashing lunacy? By definition, it's unpredictable.

Speaking with allies after Scarlet's defeat:

Logan Thackeray: Thank you, Commander. If you weren't here...I don't know how much worse today could have gone. I'm meeting with Marjory Delaqua in my office to go over our evidence. Feel free to stop by.

I'll see you there, Logan. We'll figure this out.

Lord Faren: Excellent work. Now we must depart these dank surroundings. They aren't fit for shining beacons of heroism like us.

Rox: Scarlet sure likes her explosives, huh? I'm sorry I wasn't more help, Commander. At least Braham was able to jump in at the last minute. He was biting at my heels...

Braham gets...eager for a good fight.

That he does. I wish we'd been able to stop her... Scarlet. Do you think she was behind the Molten Alliance?

I think we can reasonably assume that she had something to do with it.

Well, hopefully she stays quiet for a while. We don't know what she wants, but I have a bad feeling...

Actually, I have a question, Rox.

How are you doing, with everything going on?

I'm okay. Got a messy history with explosives, so witnessing everything that went down in the courtyard...all the civilians. I hope we can get justice for their families, the people they left behind.

Braham: Thanks for saving me a hit in that fight. Wish I'd been able to help more, though.

That was pretty impressive, though.

Wasn't it? (laughs) Wish we'd been able to stop Scarlet, though... We don't know what she's capable of...or where she's going to strike next.

Well, hopefully we'll be ready when she does.

Bug:
While pursuing Scarlet, attempting to skip from the bandit area (east) up to the center of the pavillion using teleportation skills may result in a bugged instance if the player kills Scarlet, forcing the player to restart the instance, as it cannot be completed. Backtracking to the area with the bandit treehouse may unlock a checkpoint, allowing the player to skip to the final fight when restarting the instance.
Living World Season 1 storyline
Retrieved from "https://wiki.guildwars2.com/index.php?title=Scarlet%27s_Playhouse&oldid=2617285"
Categories: