This article is about the release. For the achievement category, see Dragon Bash (2013 achievements).

Lion's Arch honors the defiant spirit of its citizenry with the rousing Dragon Bash festival, when revelers laugh in the face of fear! Sponsored by the Captain’s Council of Lion's Arch, Dragon Bash is a month-long celebration packed with all-new activities, fireworks, exclusive rewards, and surprises galore! The festival begins on June 11 and ends on July 9 Show no fear – Dragon Bash is here! — Official website

Lion's Arch honors the defiant spirit of its citizenry with the rousing Dragon Bash festival, when revelers laugh in the face of fear! Sponsored by the Captain’s Council of Lion's Arch, Dragon Bash is a month-long celebration packed with all-new activities, fireworks, exclusive rewards, and surprises galore! The festival begins on June 11 and ends on July 9

Dragon Bash was a release launched on June 11th, 2013. It was a holiday event inspired by the historical Dragon Festival, but with a Lion's Arch flair, intending to symbolize the resistance to the Elder Dragons. 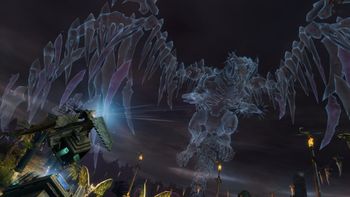 The Shatterer hovers over the city of Lion's Arch

Heralds in each city will point players towards the newly redecorated Lion's Arch, with the Lion's Arch heralds giving detailed information on new things to do. The entire Captain's Council is present for the celebration in the Grand Piazza, ready to talk and answer questions about the celebration, the inspiration for it, and why it's needed. Several festivalgoers can be found around the city contemplating the event, as well as protesters: Roardina, Merrik, Marren, and Broll.

Finolla and Volak Ironsnout are on hand to welcome players to the new arena they designed: Dragon Ball Arena. Inspector Ellen Kiel is present, no longer needed at Southsun Cove, guarding the entrance to the stage for the upcoming effigy ceremony. A new statue of Cobiah Marriner has also been constructed in White Crane Terrace, along with plaques around the city, commemorating the first Commodore who guided Lion's Arch from ruin to its current glory. A mysterious rock formation can be found in Gendarran Fields as well.

Dragon Ball Arena, Moa Racing, the Zhaitaffy vendor and Hologram Projector are marked with a dragon

A firework finale will occur at dawn (in-game) in Lion's Arch, every two hours from 9:00 AM PDT on Friday, June 14th, until 12:01 PM PDT on Monday, June 17th. The exact time of dawn depends on the server or overflow, but will always occur two hours after the previous dawn.

Lion's Arch purchased this combat arena from Finolla and has made it available to all players during Dragon Bash.

Dragon Piñatas are spread around the major cities for players to break and smash. Each piñata will reward pieces of Zhaitaffy candy, and breaking enough of them will reward the Paper Dragon achievement.

Players can bet on one of five different moa racers to win tickets. These tickets can be traded for prize money or collected and traded in for the new Mini Helmed Moa Racer.

Hologram Projectors are spread throughout Tyria, except for Ruins of Orr and Southsun Cove. Players can activate these to summon several Holographic Dragon Minions to defeat. Defeating enough of these minions will earn you the So Lifelike achievement.

Dragon Effigies are spread around the world leading up to Lion's Arch. There are 3 effigies per zone to light by interacting with them. Players can /dance in front of them to receive a bonus health buff.

There are several dragon-themed items available for players for participating in the Dragon Bash.

Effigy Lighting Ceremony
Primary article: Ceremony and Acrimony/historical
Speak to Inspector Ellen Kiel to enter. The major cultures across Tyria have sent their ambassadors to Lion’s Arch, to represent each race at a ceremony where they symbolically destroy the dragons by lighting effigies on fire. Memories on the Pyre is a single player instance.