Out of the Skies

Out of the Skies

Echoes of Ages Past
Followed by

The Last of the Giant-Kings
API
API

Out of the Skies is part of the personal story for norn characters who have completed Echoes of Ages Past and decided to enhance Beigarth's weapon for the upcoming fight. The character has to defeat the mighty griffon Windshear and bathe the weapon in its blood.

Return the axe to Beigarth.

When you enter this story instance, you will be presented with a whole host of creatures up the bridge, fighting each other. It is possible to just watch them and wait for them to whittle each other down before you join in. Note there are two waves of creatures before the boss fight.

The griffon boss spawns with 2 other griffons. Take those out first, the wolf can tank the boss quite well. Watch out for his dive bomb attack, it can hurt quite a bit and knocks you down for 3 seconds, resulting in skill lock.

If you are defeated, you will respawn at the base of the bridge. As long as Eir is still alive, the boss will not reset.

Eir Stegalkin: Windshear is on the hunt, and his savage frenzy is scattering everything in the region. Are you ready for this?
<Character name>: Is Windshear that fearsome?
Eir Stegalkin: Yes. The animals are so terrified, they'll lash out at anything and anyone. We won't be able to concentrate on Windshear with them so agitated.
Eir Stegalkin: I advise you to quickly destroy these lesser beasts first, but reserve your greatest strength for Windshear.
<Character name>: The creatures already seem to be at each other's throat. Why don't we let them wear each other down and then clean up the survivors?
Eir Stegalkin: Excellent strategy. That will put these poor creatures out of their misery and let us focus our efforts on Windshear. You're learning fast.
Eir Stegalkin: I have Beigarth's unforged steel here. Once these mad beasts are gone and Windshear defeated, I'll give it to you so you can whet it in the griffon's blood.
<Character name>: Let's show these beasties the difference between hunter and prey.

Eir Stegalkin: Your timing is perfect. Windshear is on the hunt, and every living thing in the region is in a frenzy.

I don't want other creatures interfering with our hunt. Let's take them out first.

My thoughts exactly. The hero's path is not always glorious, but always necessary.

Fine by me. Can we lure the other creatures into fighting one another?

It's worth a try. Let's be quick about it, though. I don't want these creatures to suffer, and Windshear will be here soon.

Let's get to work, then.

Why are the other animals so riled up? Is Windshear that fearsome?

He is. Worse, his power can change other animals into feral, vicious versions of themselves. They'll protect him, so we'd better finish them off first.

Fine by me. Can we lure the other creatures into fighting one another? (same as above)

After the first wave:

Eir Stegalkin: We're not done yet. There's plenty of these frenzied creatures left.

Cinematic after killing all the frenzied animals:

<Character name>: By my mother's stone tankard, what a shriek! It sounds like an avalanche fell on a moa herd. Is that Windshear?
Eir Stegalkin: None other. He's close, and from the sound of it, he's looking for a fight.
Eir Stegalkin: Stand clear of his claws and beak, and for Wolf's sake, don't fall to your death. If we guard each other, we'll be victorious.
<Character name>: Come on, let's bathe Beigarth's weapon in griffon blood.

Eir Stegalkin: Claim your prize Slayer. Plunge this steel into Windshear's heart.
<Character name>: Hear me, spirit of Griffon! Your son, Windshear, was worthy prey. His heart's blood honors my steel.
Eir Stegalkin: Poetic. No doubt someone will commission a statue of you. Your fame comes easily.
<Character name>: With your help. Tell me something, why have you taken such an interest in my legend?
Eir Stegalkin: You have more potential than anyone I've met in years. We'll speak more of this later. Right now, the jotun are our priority.
Eir Stegalkin: Once Beaigarth is finished forging your weapon, meet me at Osenfold Shear. If Korag won't abandon the ice dragon, we'll be ready for him.

Speaking to Eir before leaving for Hoelbrak:

Eir Stegalkin: Ah, I recognize that look of exhilaration. Savor it, but don't let it distract you. You need to get that axe back to Beigarth.

I can do both. If I stopped to savor every victory, I'd never get anything done!

Beigarth: Ho there, <Character name>! Have you managed to kill Windshear, then?

I have, and plunged your steel into his heart. Here is your weapon, ready to be reforged.

Blessed the beast's strength and courage—I can feel it flowing from the steel! A bit more work to temper the weapon, and it will be ready. You must be busy with hero's work; I'll give it to Eir when it's done, and she'll bring it to you when you face Korag.

Sounds good. Thank you, Beigarth. This will be a fine tale for the moot one day! 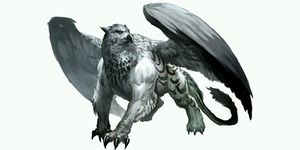 Previous text
I met Eir at the summit of a great mountain and, with her help, I defeated the fearsome griffon Windshear. I've bathed the axe in its blood, as Beigarth requested. Now all that remains is to return the weapon to him so he may temper it a final time.

I bathed the axe in Windshear's blood and returned it to Beigarth. He was impressed and told me he would finish work on it at once, then send it along with Eir when we set off to take down Korag. I can hardly wait to wield it.