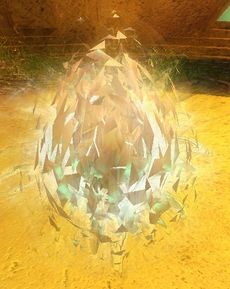 The last of Glint's Eggs has been in stasis since Glint's death. The egg is part of Glint's legacy and is said to hold the key to both saving Tyria and assisting in defeating the Elder Dragons.

The last of Glint's eggs had been in stasis since Glint's death in 1320 AE. It was given to the Master of Peace by an unknown individual for safeguarding and remained in the Zephyrites' care until 1327 AE when Aerin, a sylvari influenced by the Elder Dragon Mordremoth, sabotaged the Zephyr Sanctum and forced at least four ships to crash in Dry Top in his quest to obtain the egg.

After the Pact Commander had saved him from Aerin, the Master of Peace took the egg further northwest by himself to supposedly find a 'golden location' before any more harm could come to the egg. The Commander later learned of the existence of the egg from the Pale Tree's vision and talks with Ogden Stonehealer as well as its potential importance to the future of Tyria. Armed with this information, the Commander left to track down the Master of Peace before Mordremoth's minions, the Mordrem, would attempt to seize the egg for their dragon master.

The Commander's party eventually found the Master of Peace whom the Mordrem had ambushed and fatally injured in the Silverwastes. Caithe fled with the egg without explaining herself before the Commander could seize it. This turn of events forced the Commander to seek information about Caithe's motivations and current whereabouts from the Pale Tree who was just as puzzled by Caithe's actions and explained that safeguarding the egg was meant to be the Commander's destiny and not Caithe's.

Following the clues given by the Pale Tree's memory seeds of Caithe's past, the Commander eventually confronted Caithe in a mysterious, golden cave in the Silverwastes and demanded her to hand over the egg while Caithe insisted that they were still on the same side. The Shadow of the Dragon's assault on the cave in search of the egg interrupted the conversation, and Caithe fled with the egg once more. The Commander was forced to defeat Mordremoth's champion and return to the Pact's camp empty-handed only to miss the launch of the Pact's fleet which headed west to take the fight to Mordremoth.

During the invasion of the Heart of Maguuma to defeat Mordremoth, the Pact Commander's party reached Auric Basin where they located Caithe and the egg. They witnessed her being ambushed by Faolain, the leader of the Nightmare Court, who had succumbed to the Jungle Dragon's influence and who had been turned into a monstrous Mordrem beast. The Commander fled with the egg with Faolain in pursuit and was aided by a new Exalted ally, Ruka the Wanderer, who guided the Commander to safety. During the escape, Ruka noted that the egg had chosen the Commander as its champion. He eventually convinced the Commander that the Exalted also had good intentions for the egg as they had sworn an oath to protect Glint's legacy and oppose the Elder Dragons' ambitions.

After arriving in Tarir, the Forgotten City, the golden city of the Exalted which both the Master of Peace and the Pale Tree's vision had alluded to, the Commander went through trials of strength, wits and leadership to prove their worth to the cause before placing the egg within the Inner Chamber where it would be safe from Mordrem. The egg showed the Commander a foreboding vision of Mordremoth planning to use Marshal Trahearne of the Pact and Destiny's Edge members Logan Thackeray and Zojja, whom the dragon's minions had captured during the crash of the Pact fleet, as templates for Mordrem clones to unleash a terrible evil on Tyria. With the egg now secure, the troubling vision prompted the Commander to move against Mordremoth and end the threat the Jungle Dragon posed once and for all.

The Commander's party, which included Caithe after she had returned and explained that she had only acted the way she had out of concern for the future of the sylvari, entered the heart of Mordremoth's territory in Dragon's Stand where they saved Logan and Zojja, defeated Faolain and prevailed against the Jungle Dragon itself with Trahearne's help. Magic was released from Mordremoth's body at the moment of its and Trahearne's deaths and went in four directions. One surge of magic passed through Tarir where Glint's egg absorbed some of it. This led to a marked change within the egg, leaving the future uncertain whether what would hatch from the egg would become friend or foe to the races of Tyria.