Banner of the Pact.

The Pact is the union of the three great orders of Tyria: the Durmand Priory, Order of Whispers, and Vigil. The alliance was founded in 1325 AE by the sylvari Firstborn Trahearne and his trusted friend with the stated purpose of defeating each of the Elder Dragons one by one, starting with Zhaitan, the Elder Dragon of Death and Shadow.

The Pact is the greatest alliance Tyria has ever seen. Its primary strength is the flexibility offered by a union of orders with vastly differing methodologies as well as magical and technological knowledge and aptitude of each of the races allied with them. A notable creation by the Pact are their airships which are a combination of asura, charr, and human technology. The Pact also utilizes helicopters and submarines, originally charr prototypes which were improved on by the other races. With the Vigil forming bulk of its army, the scholars and engineers of the Durmand Priory working on arcane and technological achievements to provide an edge against the magic of Elder Dragons, and the Order of Whispers handling infiltration and sabotage missions to disrupt enemy forces, the Pact makes for a strong fighting force capable of virtually any task.

Section-stub. This key section of the article is incomplete. You can help the Guild Wars 2 Wiki by expanding it.
Reason: Icebrood Saga and End of Dragons 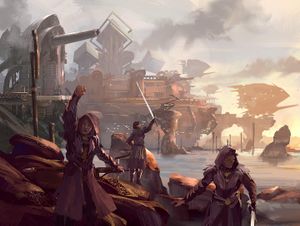 The Pact celebrates victory over Zhaitan.

The Pact was founded following the retaking of Claw Island from the Risen forces of Blightghast the Plaguebringer by the three Orders' unified efforts. The Pact was established by the Firstborn sylvari Trahearne, who carries the rank of Marshal, and the player character who serves as his second-in-command with the rank of Commander. After retaking Claw Island, Trahearne held a meeting of the Orders' representatives at Fort Concordia, and upon successfully destroying Risen presence in the Rankor Ruins, convincing its members of the alliance's ability, the Pact was solidified and plans to expand its forces and establish a base of command against the Risen began immediately.

Pact forces quickly spread across the northern continent, fighting the Flame Legion in Fireheart Rise and icebrood in Frostgorge Sound in effort to recruit the local forces, and any weapons of hostiles in the area, that would aid in the fight against Zhaitan. The main focus was Orr, where the Pact renovated a ruined fortress, renamed as Fort Trinity, just off the coast of the Straits of Devastation. The massive fortress is protected by the magic of a krait Blue Orb capable of guarding against the dragon's corruption as well as an "undead-deterring electric fencing" invented by Arcanist Slizz and powered by the Alseta Generator. From their new base, the Pact launched a complex campaign across the ruined nation, eventually reaching the Gates of Arah.

One objective pivotal to the campaign in Orr was to aid Marshal Trahearne in cleansing the corruption at the heart of Orr to disrupt its spread and liberating the spirits of former kings and queens of Orr, Zhaitan's most heinous servants. After successfully reaching the Artesian Waters and performing a cleansing ritual, completing his Wyld Hunt, Marshal Trahearne committed remaining forces to the Elder Dragon's lair in Arah. In Arah, Destiny's Edge finally reunited, and the combined forces of the Pact and the legendary guild destroyed remaining Risen resistance, and boarded The Glory of Tyria, a massive airship outfitted with energy weapon which was used to cripple Zhaitan, forcing the dragon on defensive. Weakened by constant bombardment, Zhaitan fell down from the skies to its death.

After the defeat of Zhaitan, the Pact regrouped at Fort Trinity and celebrated the completion of their nigh impossible task. Afterwards, they sent scholars under the guidance of Magister Stonehealer to explore the city of the human gods and uncover its secrets.

As the Pact continued cleaning Orr of Risen and recover from their losses, they kept out of non-dragon related affairs, and began planning to strike at Kralkatorrik. However, after the awakening of Mordremoth let out a roar that was heard all across Tyria, the Pact sent a single airship led by Laranthir of the Wild to the ruins of Lion's Arch to investigate. Trahearne and Laranthir attended the World Summit and witnessed the Shadow of the Dragon's attack on the Pale Tree; the attack convinced several nations' leadership figures to commit resources and manpower to bolster the Pact's numbers. Realizing the threat Mordremoth posed, the Pact began establishing a foothold in The Silverwastes at Camp Resolve to take out the new and still growing threat of the Mordrem. 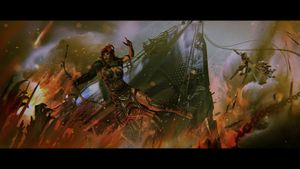 After much preparation, Pact forces finally launched their airborne assault against the Elder Dragon. Eir Stegalkin, Logan Thackeray, and Zojja accompanied them aboard one of the fleet's airships. On their way to the heart of the Maguuma Jungle, the fleet was attacked by Mordrem and sabotaged by corrupted sylvari who embraced Mordremoth call and turned into the Mordrem Guard. The Pact was devastated, losing vast numbers of personnel and armaments, including Marshal Trahearne and the members of Destiny's Edge. Additionally, trust and morale was splintered as the Pact's various races feared another ambush from their fellow sylvari.

However, even with this heavy initial defeat, the Pact was able to rally themselves and push onward towards Mordremoth. The Pact Commander arrived in the Heart of Maguuma soon afterwards, and reaffirmed their own trust in the Pact's sylvari. The Commander's party helped the Pact to establish outposts across the region, gathering survivors and supplies as they went. Eventually, the Pact was able to stand re-united in Dragon's Stand, and defeated the Mouth of Mordremoth while the Commander destroyed its mental presence. Unfortunately they were too late to save Marshal Trahearne, the final victim of Mordremoth's corruption.

In the aftermath of the war in Maguuma, the Pact Commander was offered the first-in-command position of Pact Marshal. However, the position would be more backline than before, and thus the Commander refused and resigned from the Pact in favor of a more active role in battling the Elder Dragons. Logan Thackeray eventually became the new Marshal, as he remained weakened from Mordremoth's influence and saw the position of Marshal as his best opportunity to serve Kryta and Tyria.

The Commander reached out to the Pact while trying to find ways to defeat Kralkatorrik.

After the revelation that the only way to do that was for Aurene to take the place of the Elder Dragon, but that any attempts to do so would end in Aurene's death, the young dragon fled terrified. Caithe came out of the shadows to help the Commander track her down and in doing so guided the group to Thunderhead Keep, an ancient dwarf citadel currently maintained by Zephyrites and Exalted, that may have held clues to Glint's legacy for Aurene and her champion.

In order to find and secure Glint's legacy, the Commander reached out to Ogden Stonehealer and the Priory. While Ogden arranged for the Pact to move in to secure Thunderhead Keep, Caither and the Commander located Aurene and together faced Glint's trials to determine the worth of her would-be successors.

The Pact joined forces with various other allied factions for the defense of Thunderhead Keep from Kralkatorrik's minions and managed to overcome them. After that the Pact and their new-found allies deployed to Dragonfall for the final push that ended Kralkatorrik's life and allowed Aurene to take his place.

Aside from the members of the individual Orders, the Pact has its own ranks. These are almost always specialized to a certain skill, role, or task.

Pact Soldiers are the common fighters and workers of the Pact, who are not affiliated with any Order.