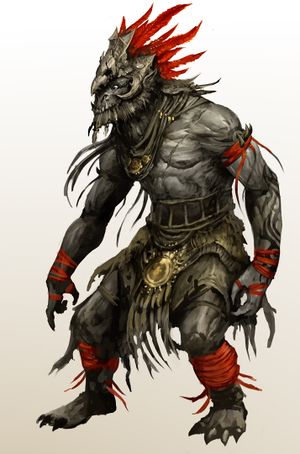 "We are the meek, we are the humble. We watch and we wait for others to stumble"

The grawl are a simian-like primitive humanoid species that once lived in Ascalon, the Blood Legion Homelands, and the Southern Shiverpeaks. During Guild Wars they showed relatively little intelligence but managed to maintain a tribal culture. Over the 250 years, they have advanced little though now have a widespread use of the common Tyrian language.

Grawl are simian in nature and slightly larger than the average human. The Grawl are bipeds and they hunch over in posture, preferring to move via leaps and bounds rather than walking which gives them an advantage in their preferred rocky terrains. Their bodies are covered in coarse fur of various shades of grey, which is heaviest at the head and neck area. Grawl shamans often tattoo their skin where their hair is lightest, with a focus around their thighs, chest, and arms. These tattoos are often in swirling or arch patterns.

Human scholars theorize that grawl are an offshoot of charr, while charr scholars believe that they are related to humans in some manner. However, neither have proven to be accurate - and given the grawl simian nature and human's history of not being native to the world, the grawl are most likely related to neither humans nor charr.

The grawl are not a united race, instead living in a large series of tribes. Each tribe has a different set of standards and faiths, though still adhere to a similar structure. Because grawl are a highly religious race, tribes are often clashing with each other, and there are even clashes between personal gods within a single tribe.

Grawl are traditionally hunter-gatherers, but also turn to scavenging if necessary. Many hunters will use rabbits as bait to draw out wurms, particularly so in the Shiverpeak Mountains. Grawl do not cultivate land, and although they will herd livestock, they make no attempts to domesticate them. The most architecture they have is crude tents, and fences for any livestock they may keep, as most grawl prefer to use natural formations such as caves, cliffs, and canyons for shelter.

Most clothing that the grawl wear is leather, though except for armor they hardly wear more clothing than is necessary. While having a crude sense of metalworking, grawl weapons are a poor imitation of the weapons used by humans, norn, and charr, and most of their weapons utilize bones, and their armor is often decorated similarly. 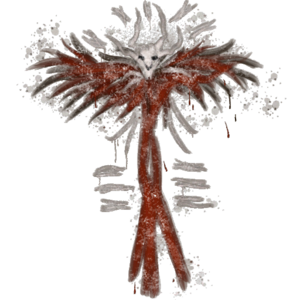 One of many crude grawl drawings.

Grawl have a deeply religious, animistic culture and tend to worship natural objects or very powerful and old beings. Religions and faith differ from both tribes and individuals, though the individual's tribe will always supersede the importance of a personal belief.

Each tribe's religion and faith differs greatly. Some will worship statues or odd natural formations in the earth, while others will worship more powerful beings. That which they worship tends to define the tribe's mentality and actions. War between tribes is not unheard of and in the past was relatively common, though when pressed by a shared threat - such as enslavement by the Flame Legion - will press tribes together in a close location.

Tribes are known to most commonly worship well-crafted or magical statues, such as statues to the Six Human Gods, and other objects, or powerful beings such as fleshreavers, elementals, and icebrood. They will also revere groups that claim to be able to interpret or directly serve the tribe's object or being of worship - e.g., Sons of Svanir being acolytes of or lesser gods underneath powerful icebrood or Jormag themself.

Grawl are originally native to the lands now called Ascalon. When the charr invaded over a millennia ago, they subjugated the grawl into slaves and forced a large number of them to flee into the Shiverpeak and Blazeridge Mountains, where their descendants still remain today. According to charr military tributes which predate the humans' arrival to the land in 100 BE, those that remained in Ascalon as the charr's slaves were forced into roles such as pulling charr chariots.

When humans took over the southern charr lands and named them Ascalon, the grawl lived as raiders in those lands. Later, when the Flame Legion subjugated the other three charr High Legions and re-ignited the assault on Ascalon at the end of Third Guild War, the Flame Legion enslaved the grawl again and utilized the primitive race as scouts before causing The Searing, and attempted using them further as shock troops, though such uses proved unuseful in the long run.

After the fall of the human kingdom with the Foefire, the grawl returned to living on the outskirts of civilization as raiders and scavengers, not advancing much in the 200 years since. Many individuals often see the grawl as potential allies, cheap labor, or easy marks, but are often disappointed by the results.

Aggro
Smash them!
Swarm them!
I need help!
Die!

Death
My spirit endures.
Avenge me.
The earth claims me.