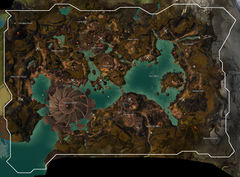 The most diverse and cosmopolitan city in Tyria, Lion's Arch was a melting pot where all the races gathered and traded. Lion's Arch owed no allegiance to any race or nation, but stood on its own – and did so by virtue of its active navy, its financial strength, and the intelligence and cunning of its leaders.

Currently under occupation by the forces of the Molten Alliance, Aetherblades, and Toxic Alliance, this battleground version of the familiar hub city replaces Lion's Arch for the duration of the Battle for Lion's Arch release. 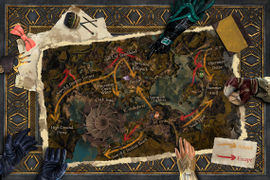 Scarlet's generals are out in the open. Kill them.

Scarlet has unleashed her assault knights to stop the Lionguard.

Battle with Scarlet is in progress.

The portal to the platform is open. It's time to slay Scarlet. 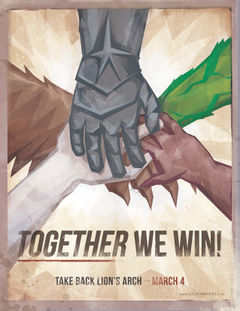 Speaking with Captain Ellen Kiel at Fort Marriner
When we clear the path, go make Scarlet suffer for what she did to Lion's Arch. Ashford's murder, the destruction, everything.

You're not coming with?

I won't lie; I'd love to chop Scarlet's crazy head off of her shoulders, but the city isn't secure. I'll stay behind, make sure nothing follows behind you.

Thanks, Captain. Scarlet's not getting away this time.

(At Postern Ward)
Kasmeer Meade: The legacy of a lunatic.
Marjory Delaqua: Calling her crazy diffuses the blame. This isn't madness; this is evil. Straight black. Blacker than a moonless night.

Kasmeer Meade: After this is over, I think we should take a vacation. Somewhere warm, where nothing wants to kill us.
Marjory Delaqua: I'd say we've earned it. Where do you want to go? The Grove? Rata Sum? Back to Southsun?
Kasmeer Meade: Not Southsun! I said somewhere things don't want to kill us. I still have nightmares about karka.