Prized Possessions is the seventh chapter of the Heart of Thorns story.

Continue the search for your imprisoned allies.

Follow up on the information that has led you to Auric Basin.

Enter Auric Basin and talk to the NPCs at

Wanderer's Waypoint — . After the dialogue, follow the green starburst into the story instance.

Bug:
Rarely, Lieutenant Francis cannot be interacted with. Rezoning or relogging will usually fix this.

Upon entering the instance, follow the green starburst again which will lead you to a group of Durmand Priory members fighting some Mordrem. Take out the Mordrem and move on to the next Priory group attacked by Mordrem. Following this, you will have to go after Ruka; chase him to a camp where Rytlock will teleport in front of Ruka. Once Ruka identifies himself, follow him to Caithe. A cinematic will occur revealing a corrupted Faolain who attacks Caithe, making her drop Glint's egg. After the cinematic finishes, grab the egg and you will be given special "Dragon Powers". Note that you cannot kill Faolain before taking the egg as her health will regenerate once reaching a certain point.

Use Dragon Surge to get away from Faolain; then it is simple to follow Ruka, dash through the vines and then use Dragon's Wing to leap over the Mordrem. For the next parts, you will have to keep a clear head and NOT panic. Follow Ruka up the cliff using Dragon's Pounce; jungle tendrils will throw poison gunk at you on the way up.

Now, this part is more pressing: Follow Ruka into the cave. Soon Faolain will be onto you, dash across the cave and then go to the other side. Slow down here, and go to the rocks on the left side of the outlook on the other side of the cave, then use Dragon's Pounce to get to the other side. Falling into the poison will instantly down the player, even if they have Itzel Poison Lore. If the player has Unholy Sanctuary, they will instead enter Death Shroud and may become stuck on the bottom instead of respawning. If this happens, you may attempt to climb out using your skills, either to escape, or more likely, die from hitting the barrier again and respawning.

Next, go through the caves while avoiding the plants; just 2 of these need to explode to kill you, so don`t use Dragon Surge, instead, use Dragon's Pounce. Be careful, as the plants will explode if you are near them, not necessarily in their target AoE ring. It will take at least four leaps to pass the exploding plant area, with Faolain following close behind, although in some areas you can run around a few plants. Use Dragon's Pounce to jump on platforms in the cave, moving in a counter-clockwise direction. Next glide across the gap (or glide across to the platform on the right/north and run west) and now you are safe from Faolain.

The final part is simple, and has no enemy confrontations. Dash through the vine wall, then use Dragon's Pounce to jump the gap. Move to the Priory camp where you first met Ruka. Follow Ruka's instructions and pass the egg through the beam (simply walk close to the beam). More dialogue will follow, setting you on your next path in the story.

Lieutenant Francis: Ceera, how are the injured looking?
Pact Medic Ceera: I won't sugarcoat it: not great. We're in no shape to join the others.
Scribe Piera: Thank the gods, it's the commander!

Kasmeer Meade: Do you think Caithe is here?
<Character name>: I mean to find out. Glint's egg is my responsibility, and Caithe stole it out from under me.
<Character name>: The Pale Tree's vision showed how important the egg could be. I'm not leaving it in anyone else's hands. Move out!

Heading into the jungle:

<Character name>: We're on the way!

<Character name>: Give 'em your worst! We're here to help!

Arcanist Robyn: Commander! We've made camp down the hill, near the big spire.
Arcanist Robyn: We discovered that the spires provide some security and...let our guard down.
Arcanist Robyn: We were too focused on these strange runes. They're connected to the spires but we can't decipher them.
<Character name>: Kas. Jory—get these people safely back to their camp. Everyone else, with me.
Marjory Delaqua: We've got it covered.

Heading deeper into the jungle:

Priory Scholar: Thanks for the save, Commander.
Taimi: We were all happy to help. Now, tell me: who's that glowy person we saw before the attack?
Priory Scholar: I have no idea. It never gets too close.
<Character name>: It looks connected to the spires...the ones that reacted to Caithe. Let's find out what it's up to.
Taimi: Also, tell me everything about these golden structures and—hey! (sigh) Okay, then. Let's go.

Rytlock Brimstone: End of the line, pal. Identify yourself.
Ruka the Wanderer: I'm in the midst of an important mission. I must follow the trail before it goes cold.
<Character name>: What is your mission? Who do you serve?
If sylvari:

Ruka the Wanderer: I am Ruka. My people are charged with preserving life from the predations of Elder Dragons. Whom do you serve, Mordrem?
<Character name>: I'm a sylvari, not a Mordrem. My people have connections to the dragon, but we are not its slaves. I'm here to kill it.

Ruka the Wanderer: I am Ruka the Wanderer, of the Exalted. We are charged with preserving life from the predations of Elder Dragons.
<Character name>: Then we share a common goal, and a common enemy. I'm the commander of the Pact, here to wage war against Mordremoth.

Taimi: I should stay here for a while and get these people organized. They need me.
Taimi: Besides, we should learn as much as we can about these magical defensive pillars.
<Character name>: Good idea. We'll be back as soon as we can.
Taimi: Listen here, Priory people. I have sensor equipment we can use to extrapolate more delicate data from the pillars.

Picking up the egg:

<Character name>: What's happening?
<Character name>: The egg's power is coursing through me.
Canach: Worry about that later. Get out of here!
Ruka the Wanderer: Follow me. I can lead you to safety.

Ruka the Wanderer: You said you felt the hatchling's power. Channel it to push through the vines.
<Character name>: This energy, it reminds me of the Zephyrite crystals, but it's stronger.
Ruka the Wanderer: Glint's offspring has chosen you. Channel this gift to get the egg to safety.

Ruka the Wanderer: The hatchling chose well. You'll be a fine champion for it.
<Character name>: Where are we?
Ruka the Wanderer: Near the camp where we met. We're not quite safe yet: we still need to reach the main pylon.
Ruka the Wanderer: Go on ahead. I'll distract the remaining Mordrem and meet you there. We need to discuss your next steps.

<Character name>: What happens now?
Ruka the Wanderer: You need to go south to Tarir, the city of the Forgotten. It's a safe place, built to shield the egg as it hatches.
If asura:

<Character name>: I think not. The egg was stolen from me, and I just got it back. I'm not taking any chances with it.

<Character name>: No can do. The egg was stolen from me, and I just got it back. I'm not taking any chances with it.

<Character name>: The egg was stolen from me, and I just got it back. I'm not taking any chances with it.

<Character name>: You're asking a lot. The egg was stolen from me, and I just got it back. I'm not taking any chances with it.

<Character name>: Sorry, but the egg was stolen from me, and I just got it back. I'm not taking any chances with it.

Ruka the Wanderer: Do you still not trust me?
If asura:

<Character name>: With an item this important, I can't afford to trust anyone.

<Character name>: I don't trust anybody.

<Character name>: I'm not sure I trust anyone anymore.

<Character name>: The egg is so important. I'm not sure I trust anyone anymore.

Priory Scribe: Lookin' for Taimi or the floating thing? Taimi's with a team somewhere. That other thing went up the hill. 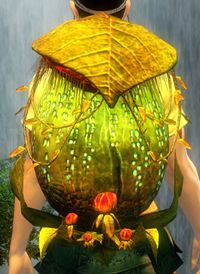 Bug:
While you have the egg, elementalist glyphs change to the unattuned versions that have no effects.
Heart of Thorns storyline
Retrieved from "https://wiki.guildwars2.com/index.php?title=Prized_Possessions&oldid=2594088"
Categories: