Kryta will win through. As we ever have. Just leave everything to me. 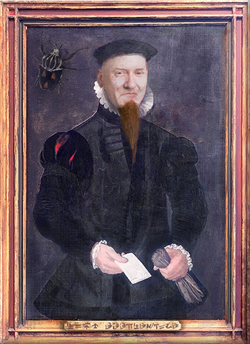 Caudecus's official portrait with the Beetle heraldic badge of the Beetlestone family. The writing below it reads "Lord Beetlestone" in New Krytan.

Caudecus Beetlestone married the cousin of Lady Wi and fathered Demmi Beetlestone. He served as a general in the War of Ascalon Independence until the eventual truce between humans and charr which he opposed ever since.[3] With his experience and popularity, Caudecus rose to the position of Legate Minister in the Krytan Ministry and emerged as a serious political rival to Queen Jennah, whose egalitarian rule had eroded her support with the nobility and whose failure to hold back the centaurs and bandits plaguing Kryta had caused some of the common folk to begin to doubt the queen's ability to defend her nation.

In addition to his activities in Divinity's Reach, Caudecus was credited with the expansion of Beetletun, home to both his own mansion and a statue of himself. His carnivals allowed him to amass a fortune which in turn allowed him to retain the services of many Ministry Guards and Seraph. According to Caudecus, the number of Ministry Guards was the reason why the bandits and centaurs did not attack Beetletun and allowed his shire to be relatively prosperous. 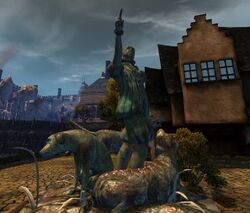 A statue of Caudecus with hounds at his feet, found in Beetletun.

Caudecus's wife died several years ago, reportedly killed by bandits, which left their daughter Demmi as Caudecus's only family. Lady Wi stepped in as a godmother to Demmi, being the young Demmi's guide while the Legate Minister was busy handling administrative matters. To keep track of his daughter's movements, Caudecus purchased a tracking enchantment and secretly placed it on the necklace of his departed wife which Demmi was wearing.[4]

In 1319 AE, Caudecus was present in Queen Jennah's throne room where Jennah named the young gladiator Logan Thackeray, who had impressed her, as her champion under the eyes of the nobles and ministers. During the ceremony the queen also made it clear that champions like Logan would protect her from mortal peril, and that all who plotted against the throne should beware the consequences.[5] When Logan replaced his late brother Dylan Thackeray as a Captain of the Seraph in the aftermath of the Ogre Revolt in 1320 AE, Caudecus became interested in the new captain and decorated Beetlestone Manor with several paintings of Logan, including his bedroom.[6]

In 1325 AE, Caudecus became suspected of orchestrating various bandit operations, the capture of the Falcon Company and framing Minister Arton for their supposed deaths, as well as being behind Minister Zamon's dealings with the bandits. However, no solid proof was provided for any of these cases as most of the suspects ended up dead, preventing prosecution. Through his contacts, Caudecus learned of the assassination plot headed by the White Mantle Confessor Esthel and sent an anonymous letter to the enigmatic spymaster E who responded with a thinly veiled threat should the lead run cold.[3] However, the rumors ultimately turned out to be true, and Shining Blade operatives raided the White Mantle hideout in the Hunting Lodge, ending Confessor Esthel's life and the schemes of her White Mantle cell in one blow.

During this time Caudecus took note of the Hero of Shaemoor, who had been involved in solving many of the cases which had threatened the queen's regime, and gently offered counsel to the Hero. However, the Hero grew suspicious of the Legate Minister after investigating the cases and Caudecus's suspected albeit unproven involvement in them with Logan Thackeray and Countess Anise. Later, these suspicions grew when Demmi Beetlestone defected to the Order of Whispers with the help of Lightbringer Tybalt Leftpaw while claiming to have evidence of shady dealings by her father. Caudecus dispatched Ministry Commander Landon to recover Demmi, but Landon perished during an ambush orchestrated by Demmi, Tybalt Leftpaw, and a Whispers Lightbringer.

Frustrated by his daughter's rebellion and learning that Lady Wi may have been an encouraging influence behind Demmi's actions, Caudecus set his sights on Lady Wi's young and impressionable daughter Valette Wi. As a patron of the arts, the Legate Minister began supporting Valette's violin playing with expensive gifts. He had private meetings with her during which Valette became convinced that the queen's administration was lacking and that Caudecus's political faction would be needed to make things right for Krytans.[3]

Caudecus hosted a party at his estate, Beetlestone Manor, to celebrate the human-charr détente. There, he promised to unveil a new creation by Uzolan the Artist, his personal inventor, who ultimately turned out to be behind a Separatist plot by Captain Monique DeLana to kill Queen Jennah. Fortunately, the soon-to-be Pact Commander, Zojja, and Logan Thackeray were able to stop the plot before either the queen or the Legate Minister could come to harm. Following this, at Jennah's insistence, Caudecus was taken back to the Royal Palace where he remained, officially for his safety, while his manor was investigated for further Separatist and bandit activities.

Lazarus reveals himself to Caudecus and Lady Valette Wi.

Caudecus fled from the Royal Palace in 1329 AE, prompting the Shining Blade officer Canach, the Pact Commander, and members of the Dragon's Watch guild to track him down and bring him back by any means necessary.[8] When found in Bloodstone Fen experimenting on Bloodstone shards, Caudecus revealed himself as the current Confessor of the White Mantle and announced his plan to take over the Krytan throne from Queen Jennah by force.

However, the sudden arrival of Lazarus, the last mursaat whom a faction led by High Inquisitor Xera had been attempting to revive behind Caudecus's back, led to the White Mantle splintering into two factions when Caudecus refused to submit to Lazarus, who in turn branded Caudecus as a heretic.[9] Before he could be killed, Caudecus fled once more with the assistance of his mesmer underling, Lady Valette Wi, to continue his schemes elsewhere.

The Head of the Snake[edit]

After escaping, Caudecus gathered his resources, sent letters to the White Mantle in hopes of preventing them from joining Lazarus's schism while proclaiming the mursaat a "false god", tried to sway Krytans to his side with posted messages openly criticizing Queen Jennah's reign, and was rumored to have headed north for the Isles of Janthir.[10] Caudecus eventually reemerged in Kryta by leading a siege on Divinity's Reach from Lake Doric in 1330 AE with a combined force of White Mantle and Bloodstone-crazed Harathi centaurs. The Confessor ordered one of his underlings, Minister Estelle, to assassinate Jennah during an assault on the Upper City, although the attempt was thwarted by a timely intervention from the Pact Commander and Logan Thackeray. The siege was quickly turned back by the Seraph, bolstered by Legionnaire Nylia Steelpaw's warband, due to the White Mantle's weakened state by defectors.

Witnessing his plans crashing around him, the Confessor was ultimately forced to take shelter as he sought out to unleash a "contingency plan" in his desperation. As he did so, Canach and a group of Shining Blade infiltrated the manor, but were all killed or captured. Following the loss of contact with Canach's squad, the Pact Commander, Demmi Beetlestone, and Countess Anise sneaked into the manor from the Hidden Falls Dock connecting to Lake Doric to bring down the traitorous minister for good.

Discarded letters found while navigating through the manor revealed that Caudecus had not only been behind the fall of Falcon Company and Minister Zamon, but he had also ordered Commander Serentine to free captured bandits, had Captain Tervelan butcher Ulgoth the Mighty's family to further spur the Centaur War, hired Separatists as his carnival workers and spurred the Ringmaster and Separatist Captain Monique DeLana's attacks. Caudecus had also orchestrated the death of Confessor Esthel, his predecessor, through feeding E with information on the White Mantle in order to rise through the cult's ranks.[3]

When Caudecus was finally found in the Grand Salon in his manor alongside Valette, he had begun to go crazed from consuming large amounts of empowering Bloodstone. During the fight, the Confessor admitted to having his wife murdered and fatally shot Demmi with the misguided belief that they could become a family again in the Mists, which prompted Valette to switch sides as she realized how unhinged Caudecus had become. Before he could be caught, the Confessor retreated to a lower dungeon decorated with his own face across the walls.

By the time the Commander's party reached him with Valette's help, Caudecus had grown to become an unrecognizable version of himself, partially becoming a bloodstone abomination. Here, in the depths of his manor, Caudecus, the ambitious puppetmaster who had engineered so many plots against Kryta and the crown over the years, was finally killed.

Further investigation of the manor after Caudecus's death revealed that he had obtained an artifact, which supposedly held the fifth and final aspect of Lazarus, from Justiciar Bauer who had been working for both Caudecus and Xera. Caudecus's journal claimed that without the last aspect the ritual to revive the fallen mursaat should have failed, which explained Caudecus's surprise at seeing Lazarus appear in Bloodstone Fen. The revelation prompted the Pact Commander to investigate whether the Lazarus who had been encountered earlier was a real mursaat or an imposter.

With Caudecus no longer backing them up and with the Shining Blade tracking down what remained of the once formidable organization, the White Mantle began to fall apart.[11] After the death of the last known justiciar Araya and the arrest of several White Mantle spies within the orders and Kryta, the threat which the White Mantle had been posing to Kryta for centuries came to an end. Albert, Caudecus's loyal butler, secured many of his former master's valued possessions from the manor before looters could get to them and sold them at Lakeside Bazaar. The deaths of both Caudecus and Demmi ended the Beetlestone line; Queen Jennah appointed Lord Faren as the new Lord of Beetletun, while Minister Wi succeeded Caudecus as Legate Minister in the Ministry.[1][2]

During first Confessor's End fight only:

During second Confessor's End fight only:

<Character's race>, if you're satisfying your curiosity about our kingdom's inner workings, you should visit the Chamber of Ministers. My schedule does not accommodate trivialities.

If human
Do you have a complaint? If so, I suggest you speak with one of the lower Ministers. My schedule does not accommodate trivialities.

If charr
Ahem. I suggest you trouble someone else with your attention, charr. My schedule does not accommodate trivialities.

I can tell when I'm not wanted.