Golem Positioning System is part of the personal story for asura characters who are from the College of Dynamics and completed In Snaff's Footsteps. Your krewe has to locate and catch the M.I.G., which is out of control.

Work with your krewe to locate the MIG.

To complete the first task given by Hronk, carefully watch the order of the beams of electricity as they touch the Golem's holographic image. By pressing the appropriate buttons in order, the Golem gets one step closer to activating.

Every time you fail to follow the order properly, the device resets completely and Hronk will inform you it was incorrect. 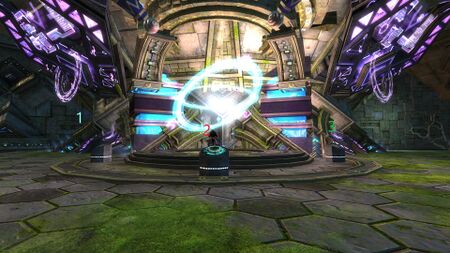 If you missed the order of the beams at the start, simply make an error and it resets to show you again how it is done.

Kazz: Hey, you're just in time! Hronk's got us all set up. Well, mostly.

Kazz: Quick, Hronk is waiting for us. He says he's got a way to track down the golem. I just hope Doxa's all right inside that thing. I'd be lost without her, you know. She keeps me on my toes.

Then let's talk to Hronk about getting her back.

Hronk: Before we proceed, I want to make it clear: we won the Snaff Prize, but we can't decide who gets the "Snaff Savant" title until we recover Doxa and the MIG.
Hronk: Now, then: I just finished calibrating my Aetheric Harmonizer for the tracking device in the MIG. Once we activate it, it'll pinpoint Doxa's location.
Kazz: Then what are we waiting for? I mean: please, sir, let's activate it right away. I'm worried about Doxa.
Hronk: I can see that. But I'm worried that your...personal concerns are distracting you. The startup sequence is more complicated than flipping a switch, you know.
Hronk: Ergo, I want you on the harmonizer core to make sure the apparatus doesn't overload, while your krewmate here fires it up.
<Character name>: Consider it done, sir. Kazz isn't the only one who needs Doxa back. She's funny, and without her, our productivity has dropped by 43 percent.

Hronk: I'll begin the initiation sequence. Note which console fires in what order, then repeat the sequence by interacting with the consoles.

Hronk: I change the startup sequence twice a day to baffle spies and saboteurs. Troublesome, yes, but necessary for security.

During the sequence mini-game:

Hronk: Okay, you've got basic motor function and eye/hand coordination down. Now it gets tough.
Hronk: Brace yourself. This last one is going to knock you flat.
Hronk: It's working! It's working perfectly! And the signal appears to be close!

Hronk: No, no, no: wrong! But keep trying. (anytime you get a sequence wrong)

Hronk: The signal is moving. In fact...it's getting closer! In fact, it's headed right for us!
Hronk: Wait, this can't be right. It says the signal is coming from right behind that wall.
M.I.G.: Access—granted.

During the fight with the M.I.G.:

Cinematic after defeating the M.I.G.:

Kazz: Did you hear that? Doxa was in there, calling for me. But why was she so out of control, so destructive?
<Character name>: Her mind has been fused with the MIG's command protocols. She's confused, in pain, and struggling to adjust to a whole new consciousness.
<Character name>: I'd say that's also why she went berserk at the demonstration: the initial shock must have been painful. I hate to say it, but getting her out will be tricky.
Hronk: A definite understatement. I've reviewed reams of recovered Inquest records, and according to them no one has ever been un-fused from a golem.
Hronk: I'm sorry, Kazz, but Doxa may already be dead. Those words you heard could just be echoes of her former self.
<Character name>: Don't panic yet. Zojja is the foremost authority on golems in the world, and she already stated her interest in the MIG. If anyone can help, it's her.
Hronk: Perhaps there's hope, then. I know Zojja's doing some work at the Incomp Optics lab outside the city. You'd better follow up with her in person.
Kazz: I'm ready. Please, for Doxa's sake, let's talk to Zojja right away.

Talking to your krewe:

Kazz: Doxa being stuck inside our golem is suboptimal, to say the least. There will be plenty of time to blame and punish the Inquest later, but for now:how do we get her out?

I'm not sure yet, but we are problem-solvers. All we need is time.

Hronk: I've done all I can for Doxa from here. The rest is field work, which I am hereby delegating to you and Kazz.

Leave it to us. The Snaff Prize is as much Doxa's as ours.

That reminds me, we still haven't chosen who gets the "Snaff Prize Savant" title. Usually it's the most valuable inventor on the project.

We won't let you down.