Guild Wars 2: Heart of Thorns™, introduces the ultimate challenge: our first raid, which is made up of three distinct raid wings. Raids are 10-player, instanced, elite dungeon content that's a challenge unlike anything we've previously released in Guild Wars 2. These raids are meant to put you and your teammates to the test and challenge you to grow your skills as Guild Wars 2 players. Raids are our answer to what skilled PvE players have to look forward to at endgame—the ultimate test to overcome and defeat. 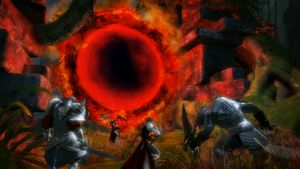 Portal to enter a raid.

Raids are 10 player squad-based PvE instances focusing on challenging combat and mechanics, designed for level 80 characters. They are the most challenging core pillar of Guild Wars 2's endgame. Each raid encounter typically utilises multiple phases with several unique mechanics, which test the squad's coordination, damage output and positioning, as well as the player's builds. Many encounters include an enrage timer: if the encounter isn't finished by the time it runs out, the incoming damage will greatly increase. Certain masteries may also be required for some encounters to complete. Downed allies can be revived or rally, but defeated allies cannot be revived during the encounters and Revive Orbs are disabled, along with other similar consumables such as boosters. There are three difficulty tiers, Emboldened mode, Normal mode, and for select bosses a Challenge mode, offered for players who want to test their skills even further.

Raids are split into multiple wings, each in a separate instance and with different encounters. While corresponding wings tell a progressing story in a specific order, each wing can be entered and completed independently and in any order. Most raid areas appear on the world map and have entrances from the neighboring zones. The Lion's Arch Aerodrome functions as a lobby for organizing a raid squad and includes portals to all raid wings.

Special rewards for finishing each encounter are limited to once per week, with a weekly reset at Monday 07:30. Progress within a raid wing is saved for players even after leaving the instance, and it's reset weekly along with the rewards. Restarting the raid instance later will recall the progress made by the instance opener, allowing you to continue with the same raid wing across multiple sessions in a week. There are no waypoints inside raids, but instead they use a checkpoint system which players can use to revive themselves and which most of the times resets skill recharges when everyone is defeated. The /resign command or one of its alternatives can be used to restart an encounter faster.

Unlike a lot of Guild Wars 2's endgame content, raiding is intended to require a substantial amount of time and dedication in order to learn each boss's unique mechanics and ways to counteract them, but in return offers a large variety of rewards. You’ll need to face each boss many times to learn how to defeat it, continuing to develop your strategies, refining your communication and honing your tactics through practice, in order to execute to a high degree with the hope of eventually conquering it and moving on to the next encounter in the wing. To start raiding, you will need to own Heart of Thorns for wings 1-4, or Path of Fire for wings 5-7.

Many solo players begin their raiding journeys by joining a free community ran raid training guild or by joining dedicated training groups listed in the LFG tool (under Raids (Training)) in order to learn the basics of each encounter and accrue kill proof. Each week Emboldened mode becomes active in a single raid wing, effectively lowering the difficulty of encounters and giving you the chance to familiarise yourself with each boss's mechanics without the heavy reliance on damage and healing.

Strike Missions are also a great way of getting used to 10-player encounters that bridge the gap between open world and raid difficulty, and to learn about certain mechanics and telegraphs found in raids.

Each week the Emboldened effect becomes active in a single raid wing, effectively reducing the difficulty of each encounter by negating the heavy reliance on damage and healing. This gives players the chance to familiarise themselves with each boss's mechanics.

Upon entry into the raid wing, players gain their first stack of Emboldened, which grants additional health, damage output, and improved healing to aid in their battle against each encounter. Each time the raid group fails a boss encounter, they receive another stack of Emboldened, granting players up to 100% additional health, 50% increased damage, and 50% increased healing output. Upon successfully completing the boss encounter, the stacks of Emboldened will reset. Emboldened can be deactivated by pressing on the mote near the entrance of each wing.

Defeating a boss whilst Emboldened is active yields the same rewards as normal.

Icon displayed above raid wing portals denoting that the Emboldened effect is active in that wing.

The effect rotates among the raids every week on Monday 08:30, effectively changing one hour after raid rewards reset.
Click here to purge the server cache, this forces the server to update the contents.

In addition to normal mode rewards, once per boss per week:

Icon displayed above raid wing portals denoting that the Call of the Mists effect is active in that wing.

Call of the Mists is an effect that doubles the amount of gold and experience gained from raid boss kills, rotating every week between each raid wing in order of release date.

The effect rotates among the raids every week on Monday 08:30, effectively changing one hour after raid rewards reset.
Click here to purge the server cache, this forces the server to update the contents.

Raids offer the ultimate challenge for you and nine of your friends.