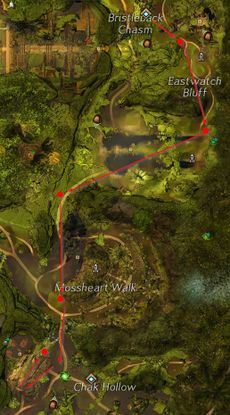 The path followed during The Predator's Path.

The Predator's Path is the ninth chapter of the Heart of Thorns story. This chapter cannot be replayed once completed.

Find a way to reunite with your team.

You must have the Updraft Use mastery to start the mission.

Speak to Wekesa, and you are directed to various quest markers throughout Auric Basin. Teleport back up to

Eastwatch Waypoint — and follow the points indicated on the map to find Taimi's hologram messages. The final message is atop a great hollow trunk. To get up to it, climb the roof of the Mordrem camp beneath the trunk, ascending eastward and using the updrafts at the east end of the trunk to glide up onto its roof.

Approaching Wekesa
Wekesa: Are you the one they refer to as commander?
If asura, human, norn or sylvari:

<Character name>: What's it to you?

Wekesa: Tarir thanks you for returning part of Glint's legacy to its rightful place.
Wekesa: Your party was here while you were in the trials, but they felt an urgency to move on.
Wekesa: They asked me to aid you in locating them.
Wekesa: The little one said she left you something "that will blow your mind" due east of here.
<Character name>: Then I'll head east. Much appreciated.

Third disk
<Character name>: Another one of Taimi's messages...
Taimi Hologram: Okay, so we seem to have wandered into a den of vinetooths... Teeth? Tooths or teeth? Anyway, super dangerous!
Taimi Hologram: So, you know, watch your back. We saw some campfires south of here, so we're headed—
Taimi Hologram: Uh-oh! Is that—? Okay, gotta go!