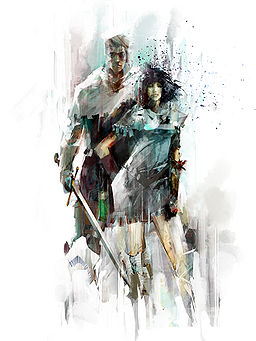 Humans have lost their homeland, their security, and their former glory. Even their gods have withdrawn. And yet, the human spirit remains unshaken. These brave defenders of Kryta continue to fight with every ounce of their strength.

Once the dominant species of Tyria, the humans have not fared well in the last few years. Their kingdoms, once spanning the entire continent, lie in ruins, leaving only Kryta. As the previous threats waned, an even deadlier one, that of the Elder Dragons, has threatened the very existence of the human race.

Humans are one of the five playable races in Guild Wars 2.

Selecting a human character will start players off in the tutorial Defending Shaemoor where players defend against the attacking centaurs.

During character creation, a player can customize a human's physical appearance and answer three race specific biography questions which affect their personal story:

The human home instance is in the Salma District of Divinity's Reach.

As a result of time and distance, humans, more so than other species in Tyria, have developed a variety of different cultures. As human refugees flood into Kryta from the crumbling edges of human civilization many stay together in an attempt to retain aspects of their history and culture which connect them to the homelands from which they fled. This is most evident in the capital city of Kryta, Divinity's Reach. There, many districts are named for and filled with the architecture and the peoples of non-Krytan origin, namely Ascalon, Cantha, and Elona.

Human society is filled with examples of great social inequality; the homeless struggle on the streets each day while the rich dine on fine food in opulent homes. But this doesn't mean people are stuck with the lives they have. Every human has the opportunity to take life and make something more of it - to make a difference to not only their life but the lives of those around them.

The other races view the humans as a traditional and conservative race, dying out and doomed to disappear from Tyria just as the dwarves did. But the humans struggle on, their spirit still strong, refusing to give up where others might walk away. In Ascalon, for example, the inhabitants of Ebonhawke, against the odds, still stare down the Charr each day from that fortress' great walls. Despite being seen as the most conservative of the races, humans are willing to use new technologies and attempt to adapt and compete with the other races. Humans are tinkerers and craftsmen, a few inventors such as Uzolan the Artist help to expand the human's technical knowledge. Of all the races, they retain the greatest expertise in history and agriculture, which may be attributed to humanity's patience and attention to detailed record-keeping.

All human cultures exhibit a preference for burial of the dead. However, the recent and apparently strengthening rise of Zhaitan and undead minions, humans have begun to request posthumous cremation with increasing frequency to prevent their bodies from joining the hordes of the undead.

Most humans are very dedicated to the worship of the Six Human Gods: Balthazar, Dwayna, Grenth, Kormir, Lyssa, and Melandru. Each god is a patron of several broad areas of concern including war, healing, death, truth, beauty and nature (respectively). These gods are credited with bringing the humans to the world of Tyria and had historically taken a large part in the development of the human race,[1][2] often using their powers to guide and intervene in events. Even after their departure from Tyria some 1300 years before the present day, the pantheon of human gods were very much involved with the affairs of humanity for a very long time. However, for the past 200 years or so the Six Gods have stepped back and while they still answer the prayers of their followers, they are much more distant than before, letting humanity stand on its own feet.

This silence from their gods has not altered the strong faith of most humans (which is part of the reason for other species' perception of humans as conservative), though some now question an undying devotion to these now-absent gods. Temples are still made devoted to their worship, and the streets of Divinity's Reach are named and decorated for each of the gods. Some even choose to devote their lives to the worship of a particular god - a Priestess of Dwayna might find herself working in a hospital or a Priest of Balthazar arranging competitions for his god. Historically several festivals were held devoted to one or more of the gods; of these, Wintersday is one of the most widely-celebrated.

Human culture is saturated with references to religion, with many common greetings invoking one or more (or all) of the six gods. While to a certain extent the prevalent belief systems of every species in Tyria has become somewhat ingrained into their respective cultures, the human relationship to the pantheon of the six is almost impossible to miss. The last functioning human government is the monarchy of Kryta, with its current capital and seat of power at Divinity's Reach (prior to its flooding, Lion's Arch was the capital of Kryta). According to records, the Krytan system of government appears to resemble those of other (now extinct) human nations.

As the last standing human government, Kryta has effectively taken on the role of sole human government, though it still recognizes representatives of the other human nations (and by extension those nations' claims to jurisdiction over their respective peoples and territories) in its body of ministers (the Chamber of Ministers, commonly referred to as the Ministry). It is governed by a hereditary monarch and the Ministry. The Ministry functions as a legislature, composing laws and presenting them via proposals to the reigning monarch, who is currently Queen Jennah, a descendant of King Doric. The monarch functions as the executor of the will of the State, authorizing (or rejecting) the implementation of the laws proposed by the Ministry and taking responsibility for their enforcement. This division of power was originally intended to be a temporary arrangement as a concession to refugees from other human nations who were sheltered in Divinity's Reach, but in the 150 years since the flooding of Lion's Arch it has become a stable system and a cornerstone of Krytan culture.

The government is supported by its sanctioned armed forces: the Seraph, the Shining Blade, and the Ministry Guard. The Seraph function in Kryta as both a policing body as well as a national defense force, led by captains who command units and are assigned to provinces and territories throughout Kryta. The Shining Blade is a small but elite force commanded by the Master Exemplar (who answers only to the monarch) whose main purpose is to protect the reigning monarch of Kryta through arms, surveillance, and subterfuge. The Ministry Guard support and protect the interests of the members of the Ministry, and are commanded to the Legate Minister.

Kryta's government does have troubles, either because of or despite the current arrangement. Many in the noble class often disagree with the decisions of Queen Jennah; many of the same people also hold positions in the Ministry, which is itself filled with intrigues and plots orchestrated by ministers whose interests may not always be on the level (of late, many of these intrigues and plots are rumored to involve the current Legate Minister Caudecus Beetlestone, who is seen by some as a rival to the Queen). Even Kryta's sanctioned and unsanctioned armed forces are caught up in the power plays of the various members of the Krytan government, and this often plays out in disputes regarding who has jurisdiction in which series of events or circumstances.

Ascalonian names typically resemble Western European and English naming style. Northern Canthans' names follow a mixture of Western and Chinese (as well as other Asian) naming practices. As an example of differences between Canthan and Asian names, note that Canthan names don't follow the typical Asian name order of family followed by personal names. Kurzick names follow a mixture of Germanic and Asian practices, while Luxons bear a mix of Greek and Asian names. Elonian names, on the other hand, often bear resemblance to African, South Asian and Middle-eastern names.

Historically, Krytan names have been similar to those of Southern Europe generally, with the addition of some Western European-style borrowings—though due to the merging of Elonian, Ascalonian and Canthan names, Krytan names have integrated those similarities as well. Finally, Orrians have Persian- and Mesopotamian-styled names. Various other styles of fantasy name are also seen among the various NPCs (particularly the surnames of old Ascalonian families).

This section covers events that occur after Guild Wars. For further information on the humans' history, see the Guild Wars Wiki's section on human history and storyline articles.

At the end of Guild Wars humanity was still the dominant race in Tyria. Spanning three continents with an extensive trade network and significant population, humanity had spread to every corner of Tyria. From these heights humanity started to falter and for the past 250 years they have been in decline.

The human's war with the charr continued in Ascalon. On the back-foot since the searing, the humans repeatedly lost ground against the charr. From 1070 AE to 1090 AE, King Adelbern was able to maintain a tenuous grasp on Ascalon, until the charr marched on Ascalon City and in his madness, he unleashed the Foefire, turning much of the human population of Ascalon into ghosts. After the Foefire, Ascalon was completely controlled by the charr except for the human fortress of Ebonhawke, which stands against the charr to this day.

Cantha was united in 1127 AE under the strong fist of Emperor Usoku who then embarked on a campaign to drive out non-human races from the continent. Under his tyranny Cantha became increasingly isolationist and contact with Tyria became increasingly rare. When the minions of Zhaitan cut off sea routes to Cantha all information was cut off too.

Horrible famine swept through Elona after Palawa Joko dammed the Elon river - with the humans so weakened he was able to walk in with his undead armies. In approximately 1135 AE, he had completely taken control of Elona. Joko's stronghold in the Crystal Desert made, and continues to make, it near impossible to access Elona via land while Zhaitan makes it impossible to cross to it by sea.

In 1219 AE, the great wave which accompanied the awakening Zhaitan smashed through the Krytan capital, the largest human settlement in Tyria at the time, and all of the coastal areas. Lion's Arch was completely destroyed and abandoned as the capital. When Lion's Arch was born again it was founded by pirates and it became a free city and was no longer under humanity's sole guidance.

Kryta, united under Queen Salma in 1088 AE, became the last stable, reasonable human nation and refugees fled to it from all of the troubled corners of the three continents. The new capital Divinity's Reach became the center of the human universe and their last hope to recover their feet even as it continues to struggle against centaurs and bandits. Many humans would die before letting anything harm Divinity's Reach and their queen.