This article is about the lore of ley lines in Tyria. For the gliding object, see Ley line (object).
Section-stub. This key section of the article is incomplete. You can help the Guild Wars 2 Wiki by expanding it.
Reason: Heart of Thorns, LWS, PoF and IBS story missing. 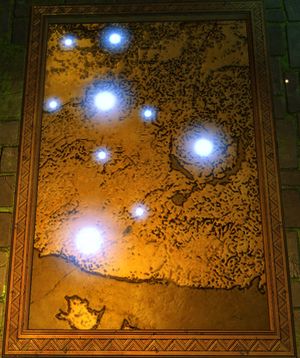 The transcendent magic channels that span the globe. Old-fashioned synergetics texts call them ley lines. Normally you can't see them or touch them, but they're real. Magic finds its own path, like rivers running to the sea.

The ley lines that criss-cross the world are the channels via which magic, the lifeblood of Tyria, flows through everything.[2] The function of the Elder Dragons is to keep this magic balanced by periodically awakening and drawing the magic into themselves, thereby reducing the level of magic flowing through the ley lines.

The Thaumanova Reactor was built atop an intersection of ley lines, and the research there, conducted by the Inquest (with the aid of Scarlet Briar), was able to identify them. However, conducting the research at such an intersection caused a massive disaster. Of note is the fact that Scarlet called the energy flowing into the reactor "dragon" energy.

In late 1326 AE, mysterious probes, built by the Molten Alliance, began appearing across the northern continent, apparently searching for a magical location. The probe in Sanctum Harbor, in Lion's Arch, soon began acting strangely, and before long a massive invasion force acting at the behest of Scarlet had arrived, razing the city and securing the ruins. Meanwhile, her gargantuan drill, the Breachmaker, descended on the harbor, drilling into the ground beneath Old Lion's Arch. Probes also appeared in the Mists, indicating that Scarlet Briar was looking for something in the Mists in the same manner she searched for ley lines.

Lionguard forces that boarded the Breachmaker after Scarlet's defeat saw on the display that there was indeed a convergence of ley lines in the harbor, some of them narrow, but one of them quite wide. Not long after, the Breachmaker apparently found its target, and disrupted the flow of magic in a major ley line that led west into the Heart of Maguuma, gaining the attention of the slumbering Elder Dragon Mordremoth.