While all seems quiet in the wake of Kralkatorrik's defeat, whispers of trouble are stirring in the Northern Shiverpeaks. In this new Living World story, you and your allies will find yourselves at the center of a gathering storm as an ancient and insidious threat slowly reveals itself. Together you'll face Jormag's cult, the Icebrood, who have been twisted by the Elder Dragon's corrupting power.

The Icebrood Saga is the fifth season of the Living World, accessible to players who own Guild Wars 2: Path of Fire. It was announced on August 30, 2019, and started with a prologue episode, Bound by Blood, on September 17, 2019.

This article assumes knowledge of the storyline up to and including Living World Season 4, which takes place after Path of Fire.

The Icebrood Saga focuses on the norn and the charr, as they defend their homelands in the Far Shiverpeaks and the Blood Legion Homelands from the threat of Jormag, the Elder Dragon of Ice and Persuasion.

The saga begins with the four charr High Legions gathering in Grothmar Valley to celebrate the death of Kralkatorrik, while Jormag begins to stir in the far north. Through its promises of power, the Elder Dragon has amassed a sizable army of Icebrood.

After the prologue in Grothmar Valley, Rytlock Brimstone, Braham, and Jhavi Jorasdottir will lead the venture into the inhospitable Far Shiverpeaks, where players will face eldritch abominations, learn about the history of the Spirits of the Wild, and confront Jormag. 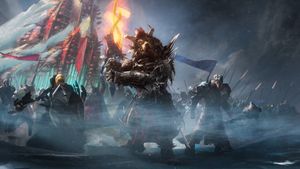 Dragon's Watch travels to the Blood Legion homelands at the invitation of Imperator Bangar Ruinbringer to commemorate Kralkatorrik's defeat with an all-legion rally.

After receiving an invitation to attend the gathering of the charr legions in the Blood Legion's homelands, several members of Dragon's Watch met up in the Black Citadel before heading off to Grothmar Valley. Marjory Delaqua and Kasmeer Meade arrived after the Pact Commander had met up with Rytlock Brimstone, Gorrik, and Braham. The small company rode the helicopter north before heading off in different directions to experience the festival, while only Rytlock and Braham stayed with the Commander. Tribune Crecia Stoneglow welcomed the party to the valley and led them to a special seat reserved for the Commander during the opening ceremony. After Blood Legion Imperator Bangar Ruinbringer's opening speech, a ceremonial battle of the "last" Branded minion was put on, led by Ryland Steelcatcher who was revealed to be Rytlock and Crecia's son. However, more Branded invaded the area, forcing the Commander's party to battle them while covertly helping Ryland with the slaying of the Branded. Before the final blow could be dealt, however, Aurene flew by and crystallized Ryland's Branded target in order to end the battle. The sight of the Elder Dragon startled the audience, most notably Bangar who expressed his disappointment at what he perceived as the Commander flaunting their power.

Braham and Ryland met and went off to socialize and get drunk during the festival, occasionally reporting in on their actions, sometimes intentionally. Meanwhile, the Commander partook in several events and met with Imperators Malice Swordshadow of the Ash Legion and Smodur the Unflinching of the Iron Legion, as well as Efram Greetsglory who acted as the leader of a peace-seeking Flame Legion splinter group, to prove that Aurene was no threat. Rumors of trouble were brewing around the camp, with several charr on edge and lashing out at the non-charr attending the festival. Before long, Braham ended up in the brig for causing trouble while drunk, and he called the Commander to release him. While leaving the brig, the pair realized that Braham's bow was not among his detained possessions.

The Commander joined Rytlock and Crecia to confront Bangar about the disturbances and acts of violence. Bangar dismissed the reports, however, and instead chose to antagonize Rytlock who reacted poorly due to the pair's troubled past. A brief brawl ensued between the two charr with Rytlock emerging as the winner while the subdued Bangar urged him to kill him and take over as imperator. Angered but aware of Crecia and the Commander's presence, Rytlock let go of Bangar as he did not want the burden of becoming the next Blood Imperator and did not want anything else from Bangar anymore. Leaving from that meeting, Rytlock and the Commander were ambushed by a rowdy band of charr whom they dispatched quickly. Before they could make sense of all the acts of violence in the festival, the Commander was called away to face yet another emergency.

Hearing from Efram that some charr had been causing trouble around the fahrar and trying to recruit cubs to an unknown cause, Kasmeer placed a mesmer disguise on the Commander to look like Ryland which would allow the Commander to investigate the leads. The trail eventually led to the War Room, where Gorrik was being held captive by several charr. The Commander rescued Gorrik from the kidnappers and found out that they had been intending to force information out of Gorrik about Aurene and her weaknesses. Shortly after, the Commander heard that Bangar, Ryland and several warbands of charr from all of the Legions—including some Renegades—had headed into the Shiverpeaks under the cover of the festival.

The Commander, Rytlock and Crecia chased after the rogue warbands only to learn that Bangar had acquired Braham's bow with Ryland's help and was planning to find and subjugate Jormag in order to "even the odds" against Aurene whom he and his followers viewed as a threat to the charr. However, because of a snowstorm, a destroyed bridge, and an ice elemental, Bangar's group escaped and Dragon's Watch had to return to the keep and wait for the storm to pass before giving chase. Disturbed by Bangar's actions, Efram and the two imperators nevertheless decided to stay in the homelands for the time being and monitor the situation while trying to uncover a connection between Bangar, the Renegades and potential sleeper agents throughout the legions.

Shortly after the departure of Bangar's army, Crecia and Rytlock decided to send a group of volunteers into Shiverpeaks Pass to scout the area and see if conditions had improved enough to rebuild the bridge which the Renegades had destroyed earlier. After braving the worsening weather and being forced to take a detour, the scouts found themselves facing an Icebrood construct which had more devastating attacks than the one the Pact Commander's party had fought earlier. Although the construct was defeated, the blizzard continued. Crecia surmised that someone else must have been responsible for summoning the storm, and decided to send more scouts to the pass later.

Episode 1: Whisper in the Dark[edit]

The commander and allies rush to Bjora Marches in pursuit of Bangar as he attempts to subjugate Jormag. But from the moment they arrive, their progress is halted by the vicious Sons of Svanir and mysterious whispers that threaten to unravel them.

The Pact commander receives a mysterious call from Almorra Soulkeeper, inviting them to Jora's Keep in Bjora Marches. Intrigued by her odd message, both in tone and wording, the Commander, alongside Rytlock, Crecia, Braham and Marjory, travels to the keep, hoping to meet up with Almorra and her Vigil. Instead of a welcoming party, the group finds the camp empty; inspecting it further, they discover its occupants dead, slaughtered with very little resistance. The Commander enters the barracks with Braham, only for both of them to get trapped inside, with the doors mysteriously sealed. To escape it, the Commander uses an ancient artifact called "Raven's Lens", that was found inside. With it, the Commander and Braham successfully unlock the door and join the others outside.

Using the lens, the Commander is able to follow the path Jhavi Jorasdottir and Almorra were taken on, held hostage by the male norn of the camp who seem to have become Sons of Svanir. The Commander follows the path that ultimately leads to an icy cave, where one of Braham's former guildmates, Olar, has captured Jhavi, forcing her to listen to Jormag's taunts. Once Jhavi is freed, she mentions that the fraenir, an evil shaman leading the Sons of Svanir in the area, is hiding inside the Raven Sanctum. To get in, they will need a second lens, and she knows one was last held by Almorra. She also finds it odd that Almorra called them, since their communicator had been confiscated when they were captured. The team splits up to search the nearby camps for any trace of Almorra, and while doing so, each teammate hears the whispers of a mysterious voice, trying hard to fracture the team. Finally, a coded note is found, letting Jhavi know that Almorra had headed up to the Darkrime Delves. The Commander investigates, only to find Almorra was long dead, buried under some rubble and her sword poking out nearby.

Recovering the second lens, the group uses both lenses to unlock the gate leading into the sanctum, with only Marjory electing to stay back at the stronghold. This place has long been a test for Raven havrouns, and the Commander moves through the mix of mystical maze and tests of scenarios described by Raven. Notably, the choices offered only seem to lead to bad results, but Jhavi explains these are by design. Finally, in the inner chamber, they find the Fraenir of Jormag, who had been leading the Svanir in the area. After being defeated, he is suddenly reanimated and puppeted by Jormag, claiming to want to help the newest Elder Dragon Aurene bring eternal peace to Tyria and how Aurene and her allies would eventually realize that they needed Jormag's help to face the "terrible things that lurk just beyond the horizon." With the message delivered, Braham says that we surely cannot believe Jormag's words. The Commander agrees, but only after a long pause.

Episode 2: Shadow in the Ice[edit]

Episode 2 is set in the Far Shiverpeaks, in a map that will expand to encompass new stories, activities, and places over the first and second episodes.

Logging into the game between the two dates listed would unlock the related episode for free. You can unlock the episodes even if you do not own Path of Fire, but you must have the expansion in order to play them. The dates are as follows: