Squads are groups of players, similar to Parties, but allow larger groups and provide organizing features for PvE and WvW, and are required to enter Raids. Several features vary or are expanded when a Squad is under the leadership of a Commander. The maximum number of players allowed in a Squad is 10, or 50 if the Squad was created by a commander.

When being in a squad, the squad interface appears at the same location as the party interface, on the top left section by default.

By default the interface shows members of the squad represented by squares arranged in a grid, with separated rows for subgroups. Each member square contains information on their name, profession icon, health bar, downed or defeated status, and other squad related icons. The health of each member is displayed by a green background that will decrease vertically to show dwindling hit points. In WvW, the supply available to the entire squad and a total by subgroup is shown.

The grid interface can be resized by dragging the bottom right corner, and as the size is decreased some elements will be hidden to allow others to be seen at a glance.

Turning off the View as Grid option on the squad panel displays instead an interface similar to the party interface when the Simple Party UI option is turned on. This interface shows extra information, like level and effects, although it will only display this for members of the same subgroup the player is part of.

Creating, joining and leaving a squad[edit]

To create a squad, open the party UI located on the left hand side of the screen (default: P) and select "Create Squad".

After creating a normal squad, Commanders can turn their squad into a raid squad by ticking the box labeled Raid mode (10-Member Limit). Only raid squads may enter Raids. 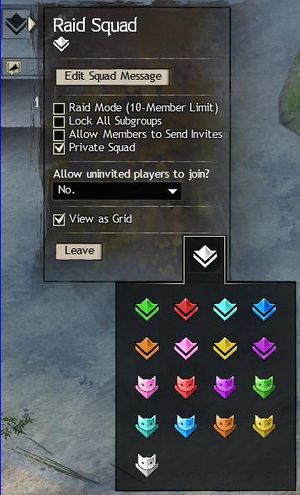 Members of a squad are split into a maximum of 15 numbered subgroups which are displayed on different rows. Subgroups are an organization tool, useful in WvW for supply management (supply is informed for each subgroup), or also for difficult content to better manage boon application, since it will prioritize members of the same subgroup, and then the rest of the squad.

Players entering the squad will always start in subgroup 1 and can drag their own squares into the desired group or into the empty boxes at the bottom to create a new subgroup, also possible by right-clicking and selecting "Create new subgroup". A Commander may lock subgroups individually or all subgroups, which will prevent players from assigning their own subgroup, and only the commander and lieutenants will be able to change a player's subgroup.

Once another person has entered their squad, a Ready Check option appears in the Squad panel. This enables commanders to initiate a ready check that will show a yes/no prompt on every squad member's screen, with a

cross showing ready status for each member in the squad member list. For members who do not have the prompt, they may press open their squad panel (default P) and select I am ready. Players can also toggle their ready status by using the same menu or by clicking on the tick or cross by their name. 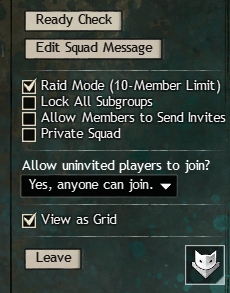 Ready checks can only be administered when the commander is online or away and not set to "off-line".

Squads with no commanders allow any member to vote to kick a squad member. The UI will show a yellow

icon to mark players that have been voted to be kicked by other players, and are awaiting more votes from members. A majority of players within the squad must vote to kick to remove the player. When you have voted to kick a player, but still more votes are needed before the player is removed, they will be marked by a red

icon and a red cross over the character name.

The following tools are exclusive to Commander squad leaders.

Commanders can place map command markers, location and object markers which are visible to the entire squad.

Commanders can set a squad message that will be sent to each member when they join the squad. The message is received by all members when the message is changed.

A maximum of 1 player for each 5 members may be selected by the Commander or Lieutenants to receive shared participation, which has effect only in World versus World maps.

Players receiving shared participation will be indicated with an

icon in the interface, and will not be able to gain participation from their own World versus World activity, but will instead be rewarded by the activity of their squad members. This is normally assigned to scouts so that they may benefit from the main group's escapades.