Preceded by
The Crystal Dragon
Followed by
Landfall
API
API

The End is the opening chapter of the Living World Season 4 Episode 6, War Eternal.

Go to Aurene to help Caithe prepare the body.

Force Kralkatorrik out of the Mists.

Regroup with your allies.

A short dialogue with Caithe will occur after beginning the episode. When the dialogue is over, head to

Claw Island Portage Waypoint — and head to Kiel's airship, Phoenix Dawn to enter the instance. Alternatively, If you have unlocked the previous living world episode, you can go in by using

Observation Deck Waypoint — and entering into The Forge.

When in the instance, walk down the path with Braham to Aurene's body (walking will be enforced by

Solemn on the Commander). After a short dialogue between the various NPCs, Caithe will begin removing the Branded spikes. Aurene's body will begin to glow and a heartbeat heard momentarily. After a brief dialogue from the Zephyrites, Caithe, and the Commander, there will appear a small white circle. Stand on it to trigger the special action skill Resonating Blast and use the skill on Aurene. Caithe's flowers from the previous episode will regrow. Use Resonating Blast again to fully revive Aurene. After a bit more dialogue between the group and Aurene, the dragon will open a portal to the Mists. Interact to enter a new instance.

In the Mists, the Commander will be mounted on Aurene. Most of this instance has forced, scripted movement; these moments will be telegraphed with

Dragonflight. Players will get four skills, which are initially locked, and will unlock during the course of the instance. Players joining in on the instance will be granted different skills that support the main player (see below). During this instance, Aurene and the Commander chase down Kralkatorrik, showing off his full body for the first time ever. After a brief dialogue, the instance owner's first skill will unlock, and Kralkatorrik's Weak Point will pop up on his face where his eye once was. Use the skill on the weakpoint to trigger the next scene. Kralkatorrik will then spawn shattered crystal meteors to attack Aurene and the Commander. Dodge these by going left or right. Kralkatorrik will then open a portal and go into a new section of the Mists, Melandru's domain, where he breaks apart the land to send giant chunks of rock at Aurene and the Commander. Dodge these rocks by going left or right like the crystal meteors, until the weak points are exposed again. After damaging them enough, Kralkatorrik will open a new rift this time going into the Underworld. Kralkatorrik will then swipe his tail; the second skill unlocks, blocking damage from the tail. Kralkatorrik will then shatter more land and his weakpoints will be exposed. Strike them to weaken him again and he will open yet another portal to a domain of the gods: Balthazar's Fissure of Woe. The third skill will unlock, to open a portal to Tyria. After using it twice all skills will lock, and the fourth skill will unlock. Use this skill on Kralkatorrik's left wing when it becomes available a cinematic will play, ending the episode. 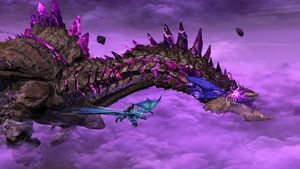 Aurene and the Pact Commander chasing a wounded Kralkatorrik in the Mists.

Dying in the second instance will reset to the beginning of the current section of the Mists.

Party member skills (all unlocked when Dragon's Fury is unlocked.)

Bugs:
As of late 2020 a bug causes Aurene's attacks to not fire directly at the selected Weak Point and thus miss during the first half of each attack phase. However, it also allows her to fire behind herself so long as the camera is angled behind her. Additionally, another bug allows the achievement to be acquired without hitting different Weak Points and instead only needing to land enough total hits on each body part (body, left wing, right wing). While these bugs persists, in order to get the achievement it is recommended to select a single Weak Point and keep the camera pointed at it while continuously spamming

Dragon's Fury. Ignore the misses being reported. Halfway into the phase they will turn into damage numbers not associated with any specific Weak Point. The achievement will be reported as soon as the player exits the portal into the Fissure of Woe.

Caithe: Commander?
<Character name>: Caithe. Where are you?
Caithe: We're still in Thunderhead Keep. With Aurene's— With Aurene. What are you doing?
<Character name>: I don't know. I feel like...like I have to tell them what happened. Divinity's Reach, Lion's Arch, Black Citadel—
Caithe: Tell them what? It's over.
Caithe: Please. She... I need you.
If in Thunderhead Peaks:

<Character name>: All right. Be there soon.

<Character name>: I'll take an airship out of Lion's Arch. Be there soon.

Sayida the Sly: Standing in front of Kralk like that... She went out like a true Corsair.
General Almorra Soulkeeper: No. Like a true soldier.
Sayida the Sly: Oh, Commander. I uh...I'm sorry. I don't know what else to say.
<Character name>: It's all right.

Logan Thackeray: I feel like I should be saluting you.
<Character name>: Thank you, Logan.

Radiance: Commander. We're here to pay our final respects. We've been singing to her since before she was born.
Radiance: It seems only fitting we sing for her one last time as we prepare for the end of all things.

After using the special skill:

Gorrik: What are you waiting for, Commander? (If idle too long.)

After using the special skill again:

Aurene: My...champion...
Gorrik: How? HOW?
Radiance: The scion speaks!
Rox: Incredible...
Zafirah: Spirit of Balthazar...
Rytlock Brimstone: Well, burn me.
Taimi: Aurene... How?
Aurene: Eating a lich...has its...advantages.
Taimi: Oh... Ha!
Taimi: ALCHEMY! DRAGONS EAT MAGIC! Ha-HA!
Braham Eirsson: Ha. HA! HA HA HA!
Braham Eirsson: PRAISE JOKO!
Rytlock Brimstone: Kept us waiting long enough.
Aurene: Brand...in heart. Hard to...mend.
Caithe: Aurene, please, you must relax.
Aurene: No time to. Kralk...atorrik. S-stop him!
Rox: But...how would this be any different? Won't we just fail again?
Aurene: WE DID NOT FAIL. We LEARNED.
Zafirah: She had to die. "For this was the fire of courage..."
Aurene: "And so did they...follow their god into battle."
Zafirah: "Without fear or hesitation."
Aurene: Now we must ride...scion and champion. Flush Kralkatorrik...from the Mists.
Taimi: Right! If he dies in the Mists, that's it. His magic is gone. And so is Tyria.
Aurene: Yes. My vision came true. And so must his.
Taimi: Gorrik! Send the commander the—
Gorrik: Kralk telemetry coming your way.
Gorrik: Do NOT let him get away this time.
<Character name>: We won't.
<Character name>: Logan. Can you meet us on the other side?
Logan Thackeray: If we know where you're steering him, the Pact will be there to finish the fight.
Rox: We'll coordinate with Gorrik and Taimi. Today, the whole world joins Dragon's Watch.
Radiance: Go, Scion. Finish the song we started.
Aurene: I will. I promise.
Aurene: It's time, Champion. Are you ready?

<Character name>: He's still bleeding badly. We almost killed him in the keep.
Aurene: Almost. Let's drive him back to Tyria and finish the job.
Glint's Echo: Remember—the scion cannot succeed without you.
<Character name>: Glint!

Aurene: Shattered crystal—watch out for those!
<Character name>: He's opening a portal! Keep on him!

<Character name>: Are we still in the Mists?
Aurene: The god realms. Melandru.

Aurene: It's healing him.
<Character name>: Can't have that. bring us in!
Aurene: (ROAR)

<Character name>: That did it!

Aurene: Another portal!
<Character name>: We can't lose him! Hurry!

<Character name>: Reminds me of—
Aurene: Balthazar. The Fissure of Woe.

Glint's Echo: A better world is waiting to be born.
<Character name>: There! Give it everything you've got!

In the cinematic, Aurene successfully severs one of Kralkatorrik's wings and opens a portal, making him, the severed wing and islands of various god realms fall into the Unending Ocean, creating a landmass known as Dragonfall while the Pact watches on from airships over the ocean.

Rytlock Brimstone: Commander. We followed the tracker. And here you are.
Gorrik: And there's Kralkatorrik! Pinned—under islands ripped out of the Mists! This is incredible!
Logan Thackeray: I thought we'd lost.
<Character name>: We all did. And maybe the world WILL end. But right now, right here, we've got a second chance.
Taimi: All because of you, Aurene!
Aurene: Now the real fight begins. It's not over yet. He's badly wounded, but I have to keep him down.
Aurene: Lean on each other. I'll work the sky; you work the ground.
<Character name>: Listen. We're making this up as we go along. Now what've we got?
General Almorra Soulkeeper: Us, obviously. And the Olmakhan.
Rytlock Brimstone: Caithe, Zafirah, and Zaeim rallied their own army. Came in on the Corsair ships.
Sayida the Sly: Glint's forces are massing to our south, but no sign of Glint herself.
Sayida the Sly: Logan, your ancestor says she'd like to see you.
Logan Thackeray: Uh...okay.
General Almorra Soulkeeper: You'll need a base of operations. I'll fortify this outcrop. Give it teeth!
Gorrik: ONE of us needs to scout this place. These are fragments of the Mists—anything and everything could be on them!
Taimi: Plus, we need to map Kralk's position and vulnerabilities. You have to send us out, Commander.
Sayida the Sly: Actually, Taimi, I could use you on my ship.
Taimi: Plank-counting and thumb-twiddling. ...Fun.
Sayida the Sly: More like survey and patrol. You can keep an eye on Aurene, map the coastline...help with cannons...
Taimi: Oh. Okay!
<Character name>: Gorrik, stay with Almorra and Canach. I'll talk to our other armies, then get you whatever information you need.
Gorrik salutes <Character name>.

Upon approaching Braham and Rox:

Braham Eirsson: You okay? Is there something you wanted to tell me?
Rox: Yeah... But not now. Not here.
Rox: Commander!
Rox: I'd like to take the Olmakhan west. Build a beachhead. Unless you've got other plans?
<Character name>: Works for me.
Braham Eirsson: I'll see if Taimi needs anything. Make sure she's okay.

Caithe: They're calling themselves the Order of the Crystal Bloom. I tried to talk them out of it, but...
Spearmarshal Zaeim: Aurene saved them, so they've come to fight for her. I couldn't say no.
<Character name>: Where's Zafirah?
Caithe: She left as soon as we landed. Said something about slow arrows not striking their mark. Think she'll be alright?
Spearmarshal Zaeim: She's a priestess of the god of war. If anyone can take care of herself, it's her.
Spearmarshal Zaeim: Commander, you'll need a force on the far side of these islands. The Crystal Bloom could be that force.
<Character name>: Go. And good luck.

Bug:
The episode tends to stall after Aurene's resurrection—before and during the instance change into the Mists, following Kralkatorrik. Exiting and restarting the episode will place you in the correct section so the mission can continue normally.