This article is about a charr faction. For other uses, see Dominion (disambiguation).
Spoiler alert: The following text contains spoilers relating to The Icebrood Saga. 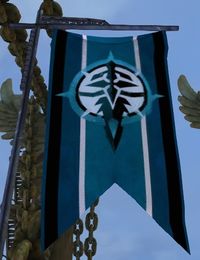 Banner of the Dominion.

Emblem of the Dominion.

The false imperators have you fight beside humans and other lesser beings. Dominion fights for Charr Above All!

The Dominion[1] is a charr faction led by Imperator Bangar Ruinbringer. It consists of Blood Legion warbands loyal to the imperator; Renegades; defectors from the Ash Legion, Flame Legion, and Iron Legion; and the newly formed Frost Legion. The faction was formed during the All-Legion Rally in 1332 AE with the aim to enslave the Elder Dragon Jormag as the charr's counter to the growing influence of the Elder Dragon Aurene and to usher in an age of charr supremacy by force of arms throughout the world of Tyria.[2][3][4]