Dragon minion incursions have thrown once-peaceful lands into chaos, and there's no predicting where the next attack will erupt.

Each chapter of The Icebrood Saga: Champions introduces new Dragon Response Missions, which can be tackled solo or in a group of up to five players. In these encounters, you'll head to invasion points to shore up defenses and protect the area from rampaging dragon minions. Work together with allied reinforcements to neutralize powerful dragon champions—the ultimate threat at the heart of the assaults. 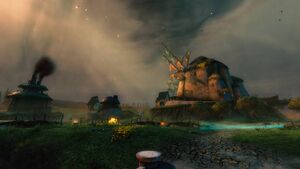 Dragon Response Missions are missions that were released with the episode Champions of The Icebrood Saga. They are accessed via the asura gate in the Eye of the North.

The missions contain story from Episode 5 of The Icebrood Saga, "Champions". Like Personal Story instances, Dragon Response Missions can be completed by a party of 1 to 5 and their difficulty scales to accommodate the number of players, but they are designed for level 80 characters.

Note: challenges can only be completed in private instances by talking to

Veadh. You cannot complete challenges in a public instance.

The rank chests above are one of the primary acquisition sources for the following rare rewards: