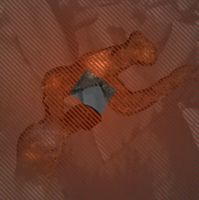 Scarlet's Secret Lair is one of Scarlet Briar's workshops. This one is located in the cave system underneath the Durmand Priory and is filled with souvenirs from her campaigns across Tyria, designs and drawings, and a hologram that hides the entrance.

Durmand Priory Waypoint — , exit the building and head to the west (near the asura gate). From there, jump over the railing at the edge of the structure. There should be a group of Frost Bats close to the entrance of a cave to your right. Enter this cave and continue past the Ice Wurms. The entrance of Scarlet's Secret Lair is to your right (east) guarded by a Veteran Cave Troll; the door is hidden behind a fake wall.

As of the Battle for Lion's Arch (2022) release, access to this instance is no longer possible by simply walking up to the door to be prompted with an enter instance dialogue; instead you will need to have the "Battle for Lion's Arch" chapter of Living World Season 1 active; access is then via the first instance of Connecting the Pieces. 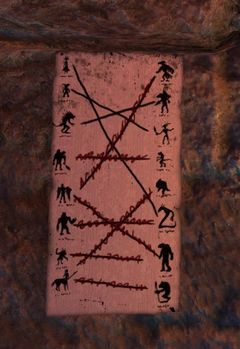 Scarlet's Apparent Attempts at making Alliances between different races and organizations in Tyria. These groups are:

Bug:
Since the "Living World Season 1 - Scarlet's War" episodes are no longer available, the chests cannot be opened since the needed ciphers cannot be acquired. This site is needed for additional content (creating legendary weapons). As such, it is still accessible.

The door mechanism requires a special type of power core before it can be opened.