This meta event begins regularly in a random zone, chosen from this list. The zone is the same on all servers, and any overflows created within 10 minutes of the start of the meta event will also host the invasion in the same zone. The selected zone will be communicated to all players in game through the global chat.

After the first wave is defeated a second wave will spawn.

After the second wave is defeated a third and final wave will spawn.

When all reinforcements and the final wave is defeated Scarlet is driven out of her hideout.

At the beginning of the second wave Scarlet will summon either the Molten Alliance or the Aetherblades.

When the second wave as well as the first reinforcements are defeated, the other faction will be called as reinforcement. 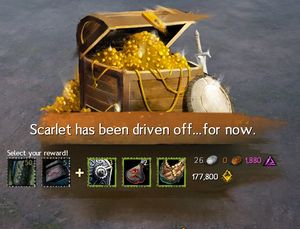 Reward for completing all three waves of the meta event

The meta event provides an award upon defeating Scarlet Briar. Players are required to participate in at least one wave of the meta event to earn credit. The reward depends on the number of waves completed by the players before the meta event timer ends. Players may receive the reward once per zone per account per day. This means players will likely skip zones that have already occurred that day unless they wish to farm the events.