Has canonical name::Thrown Off Guard

Thrown Off Guard is part of the personal story for characters who joined the Order of Whispers and who picked "Let's use a decoy and lay a false trail" in the previous mission.

Lead the Ministry Guard on a false trail.

Tybalt will be under the effect of File:Ow:Demmi Illusion {{#show:Demmi Illusion|?Has canonical name|default=Demmi Illusion}} which transforms him into a false Demmi Beetlestone, although he unconvincingly retains his sniper rifle. On the way to the docks, you will encounter many members of the Ministry Guard. Some are hostile, but others simply ignore you. When you reach the ship, Tybalt gets on and sails off to Stormbluff Isle, and the mission ends. 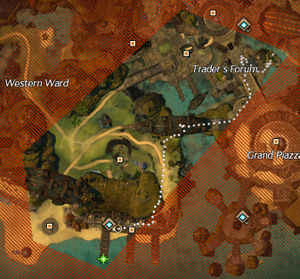 For a quick route with only one group to fight, follow the path on the screenshot. Be careful how you move though, because some of the parts of the route go on the very border of the instance, so don't go too far so you don't get kicked out.

As of the June 23, 2015 update, the mission starts on the northern edge of the Grand Piazza rather than near the sewer entrance with slightly altered borders, making it easier to do the above 'quick route', while also avoiding what originally was the first group of Ministry Guards.

Talking to the transformed Tybalt:

Lightbringer Tybalt Leftpaw: If we ever do this again, <Character name>, you're the one getting transformed!

You look great, Tybalt. Just hang in there.

Encountering Ministry Guard on the way to the docks:

Lightbringer Tybalt Leftpaw: So far, so good.
Ministry Guard: There she is! That's Lady Beetlestone! Get her, now!

Lightbringer Tybalt Leftpaw: Head through the Agora. We've got a ways to go yet.
Ministry Guard: There's Demmi Beetlestone! Get the traitor!

Lightbringer Tybalt Leftpaw: Long narrow path between rocks, huh? That's not dangerous or anything.
Ministry Guard: Well, look what we have here. Daddy's little traitor, that is. Get her!

Lightbringer Tybalt Leftpaw: The docks should be close now.
Ministry Guard: Give up, Lady Beetlestone. Your father's invested a great deal of money in your return.

Ministry Guard: She's headed for the docks! Stop her before she escapes.

Cinematic upon arrival at the Harpy's Smile:

If you talk to Tybalt:

Lightbringer Tybalt Leftpaw: Well, that's the dangerous part. Except now, I'm a woman alone at sea with a bunch of sailors. Hang on, I'm having second thoughts...

If anyone gets too lecherous, just give them a hard smack in the jaw.

Right. Uhm, how hard do you think I could smack these guys before they keelhaul me?

Just stay calm, Tybalt, and sneak off the ship as soon as you can.

Remember, Demmi is a noble of Kryta. Reputation will protect you.

Right. I'll play up the noble angle and remind them who my daddy is. Heh.

You'll be free before you know it, buddy. See you soon.

Just flirt with all of them. They'll be too busy fighting over you to try anything.

That kind of chaos is tempting! I'll give it a shot.

That's the spirit! Enjoy yourself. I'll see you soon.

If you talk to Captain Conerry:

Better give her at least a little space. Thanks.

Bug:
Some groups of the Ministry Guard may not turn hostile or trigger their dialogue as you pass them.
Anomaly:
Unlike most story instances in Lion's Arch, this one is devoid of NPCs not important to its progression.
The Orders of Tyria
Retrieved from "https://wiki.guildwars2.com/index.php?title=Thrown_Off_Guard&oldid=2339450"
Categories:
Hidden category: