Flame and Frost was a multi-part narrative event that took place from January through May 2013. It was the first story arc of the Living World and dealt with a new threat called the Molten Alliance, a force of Flame Legion and dredge working to combine their magic and technology into a fearsome power. Players were tasked with helping the refugees fleeing from an unknown threat in the Shiverpeak Mountains, assisting two new NPCs, Braham and Rox, on their missions, and raiding the Alliance's Molten Facilities underneath the Shiverpeaks.

At the beginning of each Flame and Frost release, the player received a message via mail providing details on the current event. The sender was based upon the character's race, with the first message coming from their racial leader, and the next two from a member of Destiny's edge (with members of the Vigil receiving a special mail). The final message came from Braham. These messages guided players on where they should go to find the beginning of the content.

Heralds were permanent additions to each of the major cities introduced with the Flame and Frost: Prelude game release. These NPCs provide information on the latest occurrences in the living story of Tyria, pointing players where to go from the major hubs. There are two heralds in each of the major capital cities (Divinity's Reach, Hoelbrak, the Black Citadel, Rata Sum, The Grove, and Lion's Arch), situated near the city's main entrances and asura gates.

New scouts were added within Wayfarer Foothills and Diessa Plateau with the Flame and Frost: The Razing game release to point players towards locations where important activity may take place within the zone. These scouts have a gold star on their normal map icon to identify them as Living Story scouts. They are not linked with heart NPCs, and therefore never stop showing the map. Each of the designated areas also have a nearby Living Story NPC that provides basic information on local tasks.

Two Priory field reporters were added in Hoelbrak and Lion's Arch to inform players on more of the background lore of the Living Story arc.

Camps for the refugees are located in Hoelbrak to the east of Might and Main, in the Black Citadel on the north side of Perimeter Loop, and in Lion's Arch in Farshore Ward on the south beach. Some refugees will talk to players, providing insight on what is going on. The Consortium is helping build a future home for the Lion's Arch refugees in Southsun Cove named Camp Renewal (which is starting to look suspect as the story progresses). Each camp has a coordinator that will give a status of the refugees. 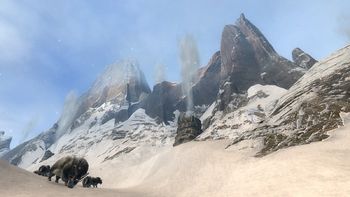 This update included many of the game features for the game release. Content related to Living Story can be found in Wayfarer Foothills, Diessa Plateau, the Black Citadel, and Hoelbrak. This content will change over the course of events.

The Refugee Volunteer achievement track is released as part of the Flame and Frost Living Story. Content appears in Wayfarer Foothills and Diessa Plateau. Refugees begin appearing in Diessa Plateau on the evening of 29 January. Refugee camps appear in Hoelbrak and the Black Citadel. The Wolfborn Watch and Adamant Watch appear near the camps.

The Refugee Blacksmith and Refugee Rancher appear in the Hoelbrak and the Black Citadel refugee camps, respectively.

The Refugee Steadholder and Refugee Primus appear in the Hoelbrak and the Black Citadel refugee camps, respectively.

The Wolfborn Watch and Adamant Watch change their dialogue to be more specific and note that Knut Whitebear and Rytlock Brimstone have sent scouts to the north. The refugee camps have added structures and have more refugees in them. Refugee Froya and Refugee Fiannas appear in the Hoelbrak and the Black Citadel refugee camps, respectively, mentioning the lack of room available in the camps. The Wolfborn Watch reports the dredge are suspected to be behind the attack along with magical help from the shadows. The Adamant Watch reports the Flame Legion have attacked villages.

The Wolfborn Watch mentions an anonymous benefactor in Lion's Arch giving aid to the refugees. The Wolfborn Watch also reports the dredge and Flame Legion are conspiring together in a major offensive against norn and charr villages. 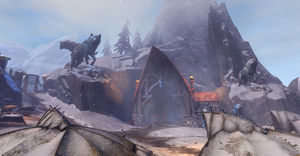 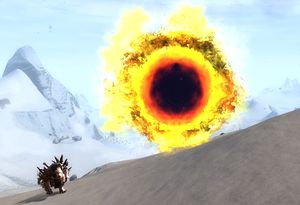 Camps in Hoelbrak and the Black Citadel become crowded and refugees head to Lion's Arch. One of the Lionguard is assigned to coordinate the new refugee camp. The Molten Alliance of Flame Legion and dredge who previously stayed in the background, now make an appearance. The various members of Destiny's Edge call upon their trusted allies for help, who can assist as part of The Gathering Storm. The Consortium is assisting refugees in Lion's Arch and helping them build homes in Southsun Cove. Refugees arrive in Lion's Arch missing their Refugee's Goblet and Refugee's Wooden Soldier. Heroes can assist them as part of Lost and Found.

More refugees arrive in Lion's Arch and they left their Refugee's Compass and Refugee's Sword Belt behind. Heroes can assist them as part of Lost and Found.

More refugees arrive in Lion's Arch and they left their Refugee's Logbook and Refugee's Ship in a Bottle behind. Heroes can assist them as part of Lost and Found.

The Molten Alliance continues to ravage norn and charr homesteads. Rytlock Brimstone is planning to mount a counteroffensive and is looking for heroes to assist. Two new characters come to the front of the story, the norn Braham and charr Rox. Braham seeks help from the Black Citadel to save his home of Cragstead from the invaders. He soon finds however that both the Black Citadel and Hoelbrak are occupied with handling the massive flow of refugees and are too busy to assist. Word is that he would appreciate assistance from any heroes willing to lend a hand. Rox is planning a critical mission to rescue an important devourer hatchery from the Molten Alliance in hopes of building a force that can withstand their vicious attacks. The Order of Whispers has implanted an undercover agent into the Molten Alliance forces, and Agent Brandubh needs the assistance of heros to locate and translate the dead drops left by this agent. Sonic Periscopes have begun appearing in Wayfarer Foothills, Snowden Drifts, Diessa Plateau, the Plains of Ashford, and Iron Marches. Audio Logs from these can be returned to nearby collectors for karma rewards.

Moto and his Super Adventure Box begin entertaining the children of refugees. Perhaps players with Continue Coins can participate in the fun. 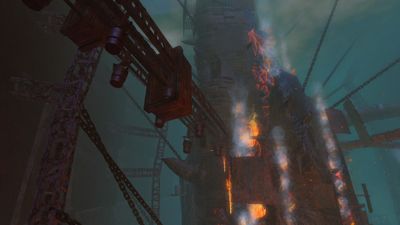 The massive molten weapon in the heart of Molten Facility.

The Molten Facility is discovered, Rox and Braham head out to take down the facility with the help of the heroes of Tyria. The new dungeon features the Molten Alliance and an epic boss battle. There are many facilities to discover and take down, heroes all across Tyria will need to band together and whittle away at the Molten Alliance strength. After the heroes succeed in taking down the facility, Rox heads back to interrogate prisoners (Rox: Avenger of the Dispossessed) while Braham confers with Knut Whitebear (Braham: Avenger of the Dispossessed). Additional refugees appear in the Lion's Arch camp.

With the Molten Alliance defeated, the heroes celebrate during the epilogue. Bonfires are lit in the three major cities, allowing the heroes of the narrative to swim in their accomplishments. Players can receive the A Rallying Flame achievement during this period. Previous achievements cannot be obtained after this day. Several refugees leave the camps, some going to Cragstead or North Nolan Hatchery.

The epilogue ends and the heroes turn back to face the dragons once again.