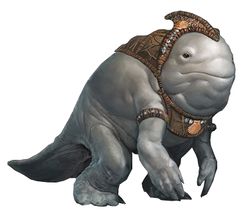 This article is about the race. For the NPC, see Quaggan (NPC).

Quaggans are a peaceful, amphibious race, generally regarded as kind and gentle creatures—until they're pushed. A quaggan who has been angered or is in pain will become a destructive, instinctive creature and transform to expose teeth and claws normally hidden by their rounded, benign exterior. They have had some trouble with aggressors—in particular the krait, and most have moved from the open oceans to the rivers, lakes, and shoreline around the Maguuma Jungle, Steamspur Mountains, and Kryta. 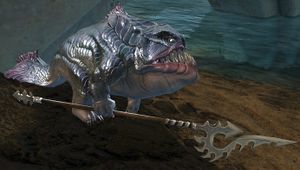 Quaggans are plump, rotund creatures with beluga-like faces. They have flippers on the end of their limbs and a broad tail shaped like that of a manatee. In southern areas, their natural skin tone is a blend from a two-tone sea-blue on the back to pale grey along the belly; similar to a dolphin. In the north, they are black along the back and white along the belly; similar to an orca. They are an amphibious species capable of thriving equally in both salt and fresh waters. They are also able to spend time on land, though their skin dries and cracks after about a day, which is uncomfortable for a quaggan. They are omnivorous and live primarily on harvested fish, coral and seaweed. Quaggans also lay eggs, and their young, referred to as tadpoles, hatchlings, and calves (depending on age), are tended to by the entire community in their nurseries. The eggs start out flat and glowing and will increase in size, glow intensity and turn spherical until they hatch. While flat the eggs are kept in baskets, separated by color, but once they have become spherical they are removed and placed on the floor; the colors aren't separated. The white net around the egg is not there initially as eggs without the net can be seen in Sparkfly Fen during the "Protect the quaggans from the krait" renown heart. Quaggan hatchlings have different colors according to their gender. If male, they are blue, and if female, they are pink, though by adulthood, female hatchlings will have turned blue in color as well.

When quaggans are threatened or in pain, their adrenaline levels surge and they become more fish-like: scales cover their bodies like armor; their eyes become bigger, clear and lidless; parts of their skin turn a dark scarlet hue; their head becomes more bony, with a more fish-like structure and jaws; fangs erupt from their mouths, fins from their backs and tail; and their flippers grow long, formidable talons. While in this state, instinct overcomes rational thought and the quaggan is driven only to destroy thinking nothing of tactics or collateral damage. Only a few quaggans are able to retain any control through this rage.

Quaggans are very peaceful by nature and their society actively avoids fighting. This is mainly due to their ability to transform which they consider dangerous not only to themselves but to others. The transformation is seen as a social faux pas, referring to this as the "rage," and any heroic quaggans, those who are able to be aggressive without losing control, are seen as odd by their society. They are so peaceful in fact, that they have been known to agree to an aggressor's terms because they simply want to avoid conflict.

Quaggans are unfailingly polite, so much so that they consider almost any self-reference to be offensive and self-centered. They rarely use self-referencing pronouns or names of their own kind, instead preferring to use the general term quaggan - when dealing with other races, they tend to use the individual's name. Quaggans in positions of authority, particularly in organizations with mixed racial membership and/or martial purpose, will transition to using personal pronouns to prevent confusion, provide clarity of address and chain of command, and to project authority.

Quaggans make heavy use of "oooo" sounds in their speech using words such as "foo" and "coo." This manner of speech leads many to assume the quaggans are childlike or less intelligent, where in fact they are actually quite wise but in ways that are different from most other races.

Quaggans are comfortable naked but wear clothing as a sign of individuality and pride. Normal quaggan clothing consists of scale-sequined head-pieces with long, beaded harnesses around the upper chest and arms. They often adorn themselves with water-resistant feathers of colorful shorebirds.

Quaggan homes are round pods made of coral and corded seaweed. The pods are tethered to the ocean floor but can be easily towed to safer locations if needed. For light, quaggans farm luminous pearls and phosphorescent algae.

The quaggan from the arctic seas hold Quaggan Games - a competition between multiple villages, which is held sacred and important to their villages and way of life.

Quaggans have a conservative, traditional religion which revolves around a single deity known as Mellaggan, who represents the bounty of the sea. Human scholars connect Mellaggan to their nature goddess, Melandru, because the quaggans use sunken temples of Melandru to worship Mellaggan, as well as other similarities. The quaggans do not believe the two to be the same but are too polite to openly disagree. The pastkeepers serve as priests and are responsible for the legends of each community of quaggans. Quaggans consider their nurseries to be their most sacred territory.

Before being forced out of their old territories, the quaggans were governed by a leader referred to as a markissios. However, their central leadership was killed by the krait. They now govern themselves under the leadership of their village mayors, referred to as varonos. These varonos work with one another, offering aid when they can, so the race is still friendly and interconnected.

Overall, quaggan history is mainly uneventful. Most records merely state things such as ancestry lines or when food was bountiful. During this time, the quaggans lived primarily within the Unending Ocean and the unnamed seas to the north. Over the last fifty years however, the krait began invading quaggan homes and forced them towards Tyria. Those in the far northern seas were pushed south by the Elder Dragon Jormag along with the kodan and norn. Now, the quaggans live along the Tarnished Coast, the Sea of Sorrows, and within the inland lakes, such as Lake Gendarr. Their attitude of simply moving out of the way of more aggressive races has backfired because now they have run out of places to move to. 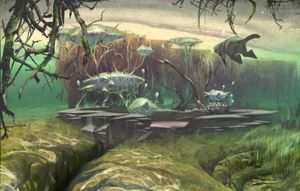