Character creation is a 10-step process guiding a player through creation of a new character. 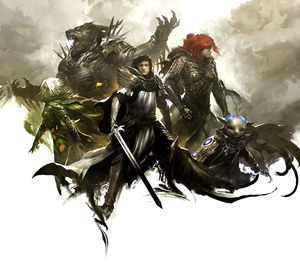 There are five playable races that you can choose for your character in step one. That choice determines your starting location, personal story, and racial skills, as well as differences in appearance and lore. The races are designed to be balanced, such that no one race possesses an unfair advantage over other races.

Every race has the same options for gender in step two: male or female. Aside from physical appearance and some dialogue, there are no gameplay differences between them.

Step three allows you to choose one of nine professions, unrestricted by race or gender.

Guardian
Guardians specialize in protective and defensive magic. A deep sense of loyalty to their allies fuels their passion and power. They're also skilled with a variety of weapons which they put to use against their enemies.

Revenant
Revenants manipulate energy from the Mists to invoke the power of legends from the past, unleashing immense attacks that dominate foes and unleash chaos on the battlefield.

Warrior
Warriors are masters of martial skills. They rely on speed, strength, toughness and heavy armor to survive. They're versatile in combat and benefit from offensive and defensive abilities. Warriors inspire allies and demoralize enemies.

Engineer
Engineers are technological and alchemical masterminds. They employ turrets, grenades, elixirs, and a variety of other impressive devices and concoctions to overcome their enemies.

Ranger
Rangers are proficient with the bow. They rely on a keen eye, a steady hand, and the power of nature to slay their targets. Their loyal pets, which rangers tame and train, distract enemies while the rangers strike safely from a distance.

Thief
Thieves are adept at the art of stealth. They utilize surprise and shadow to get close to their enemies, and they're deadly in one-on-one combat. They have an affinity for setting traps and going where they were never meant to go.

Elementalist
Elementalists have harnessed Tyria's natural forces. Their powers of destruction are drawn from an affinity with the four elements that make up the world. They conjure air, fire, earth, or water to assault their enemies.

Mesmer
Mesmers are maestros of mirage. They weave mental magic that confounds, controls, or evokes emotion in their enemies. With a wave of the hand, they can shatter their own illusions to produce even greater special effects.

Necromancer
Necromancers are masters of dark arts. They summon the dead to fight for them, channel blood energy, and rend their enemies' souls. Necromancers draw life force and use it to strengthen or heal themselves and others. 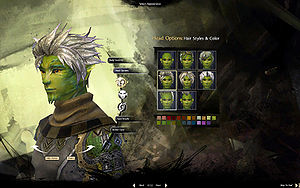 In step four, you can customize four different aspects of your character's physical characteristics and appearance.

Steps five to nine involve answering five separate multiple-choice questions that influence the biography or background of your character.

You can choose to "Skip to End" at each of these steps, in which case the game will randomly answer the questions for you and take you to the last step.

The last step is to choose a name for your character, which can include from 3 to 19 characters. Names must be composed entirely of letters and (optional) spaces; names always use title case (i.e. the first letter of each word is capitalized) and must begin with a letter.

For non-space characters, the English versions of the game allow the standard 26 letters of the alphabet along with accented letters such as à and è. All client versions on all servers also allow ÄÖÜ umlauts in the name.

You are allowed to use the following characters:

If you intend to role-play or otherwise desire to have names consistent with lore, note that some races have naming customs:

As soon as you confirm the character's name, you will be transported to a race-dependent mission demonstrating basic game mechanics. After completing the tutorial, your character will end up in the starting area for their race.

Characters begin play with the following list of equipment: