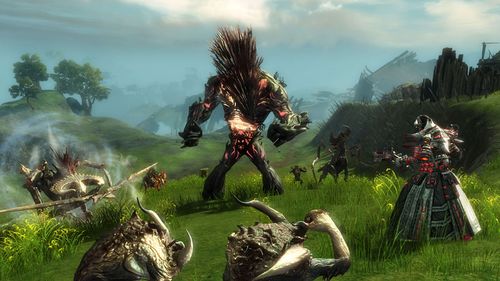 Mordremoth's Minions Invade Tyria was a special weekend event running from 9:00 a.m. Pacific Time (UTC-7) on September 10, 2015 through 9:00 a.m. Pacific Time (UTC-7) [16:00] on September 14, 2015. The event consisted of invasion-based events that span across three zones: Brisban Wildlands, Kessex Hills and Diessa Plateau. Invasions occured on every hour at the 30 minute mark, with an hour extra break after the third invasion. Invasions consisted of three kinds of events that focused on destroying Vine Crawler Spawners.

Descriptions
Strange activity has been spotted in <zone>. (Prepare for invasion)
The Mordrem are invading <zone>. (Invasion ongoing)
The Mordrem invasion is withdrawing for now. (Hour break)

There is a schedule for three similar meta events, each occurring in a different zone.

Each meta event may include three events, each requiring destruction of Vine Crawler Spawners in a different way.

This reward is received once per map per day.

This reward is received every time one does the event.