Preceded by
Glory of Dragons
Followed by
Descent
API
API

This article is about the story step. For the condition, see Bleeding.

Reforge and use a true Dragonsblood Spear.

Travel into the cave network under the island. 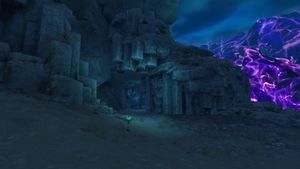 Entrance to the Kralkatorrik's weak point.

Test the bloodied spear on Branded in Dragonfall is completed by using the bloodied spears generated when near the quest objective marked branked. You do not need to run to all six shown locations, as the Branded respawn after some time.

The location of Kralkatorrik's weak point is at Shackled Grasp. Starting from

The Underworld Waypoint — , head northeast. Just before the Brandstorm (assuming the

[Group Event] Engage Kralkatorrik (80) event isn't ongoing, or finished) there will be a cave entrance to the left. Follow it underground, which will lead you to an exposed scab. Spear Kralkatorrik using the special action key.

Zafirah: Good hunting, Commander. I see you have the blood. Here's the spear.
Zephyrite: Coat it with Kralkatorrik's blood. A brief resonance should fuse the two together.
<Character name>: Should. Let's hope Gorrik's right.
Zephyrite: Ready to sing, sister?

After reforging the spear
<Character name>: A true Dragonsblood spear.
Zafirah: May it fare better than the last. Now, Commander—show us a god of war.

After testing the spear
Aurene: The spear. Is it...?
<Character name>: Working beautifully. Time for the real test.
Aurene: Kralkatorrik. Try near his claw, Champion—there's cover from the Brandstorm.

Approaching Kralkatorrik’s weak point
Taimi: The choppers brought in plenty of blood from the wing. Enough to arm our best fighters.
Gorrik: And the Zephyrites have been singing as fast as they can.
Taimi: It'll be a while before we have enough, but we're already distributing the ones we've finished.

Next to Kralkatorrik’s weak point
<Character name>: Elder Dragon. I believe this belongs to you.

After escaping the cave
Taimi: Commander, you're right—the spear really works. But somehow Kralkatorrik is still healing!
<Character name>: What?
Taimi: I know! We're redirecting ley lines, but it's not working! It's like there's an artery of ley energy right underneath him!
Gorrik: My seismic data supports Taimi's hypothesis. He's tangled in some kind of cave network.
<Character name>: We have to get in there and block that ley line.
Zafirah: I'll go.
<Character name>: Good. Caithe, you come too.
Logan Thackeray: Commander, do you need your Pact marshal?
Rytlock Brimstone: Glint's army needs you. Stick with them. Commander: I'm coming.
<Character name>: It's settled. Let's go.