The Origins of Madness

The heroes of Tyria face a battle on two fronts; their beloved land is imperiled as never before. From under the sun-baked sands of Bloodtide Coast, a gigantic, three-headed jungle wurms has arisen to threaten all who come within its domain. In the mountains of Lornar's Pass, Scarlet's latest creation — a towering, mechanical monstrosity — is wreaking destruction.

The Origins of Madness is the release launched on January 21, 2014, lasting until February 18, 2014. The release consists of the introduction of the Twisted Marionette Weapon Test meta event and three wurm world boss events. The meta event is the Living World portion of the content, pitting players against the Twisted Marionette and Scarlet's minions. The wurms are a set of three world bosses that are a similar challenge to Tequatl. 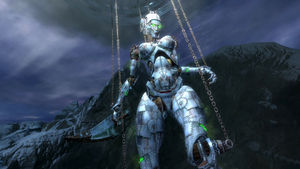 The marionette towers above the heroes.

After the update, the following mail was sent to all players: