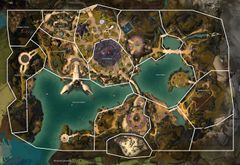 Lion's Arch, built upon the wreckage of the Krytan City of the same name, has grown and prospered in the years since the rise of the Orrian Dragon. Founded by pirates and dependent on trade, the city has become a common ground for all the races of Tyria.

Lion's Arch, the most diverse and cosmopolitan city in Tyria, is a melting pot where all races gather and trade. It owes no allegiance to any race or nation, but stands on its own—and does so by virtue of its active navy, its financial strength, the intelligence and cunning of its leaders.

Lion's Arch figures prominently in the game's storyline. One of the main themes of Guild Wars 2 is bringing together disparate, even opposed groups in order to fight a greater enemy: the Elder Dragons. Alone, no race will survive their awakening. Only together can the races of Tyria survive. Nowhere in Tyria is that belief more strongly held than the city of Lion's Arch.

As the cultural and economic hub, Lion's Arch serves as the central focus of holidays and festivities such as Halloween. During Halloween, Mad King Thorn walks the streets of Lion's Arch telling jokes, and the city is full of spooky, dark, and pumpkin decor.

Section-stub. This key section of the article is incomplete. You can help the Guild Wars 2 Wiki by expanding it.
Reason: Add lore from Sea of Sorrows and Guild Wars 1.

Lion's Arch went through multiple changes over the years since its days as the capital of Kryta in the original Guild Wars to its current incarnation as a free city in Guild Wars 2.

Section-stub. This key section of the article is incomplete. You can help the Guild Wars 2 Wiki by expanding it.
Reason: Add lore from personal story like Claw Island etc.

In 1219 AE, the Elder Dragon Zhaitan woke from its slumber. The Rising of Orr created a great flood which destroyed and completely submerged the old capital. The ruins of Lion's Arch were utilized as a safe harbor by ships looking to escape the horrors of the sea.

A decade later, in 1230 AE, the wreckage of old Lion's Arch was slowly turned into a refuge for Corsairs and other pirates, smugglers, and other independent vessels. Shanty towns were created, and as the waters slowly receded, a settlement formed that owed no allegiance to Kryta. This settlement was unified by a human named Cobiah Marriner, who fought against the scourge of Orr alongside charr, asura, norn, and any other race that would lend their vessels to the cause. Out of that staunch and allied front, the city of Lion's Arch was reborn.

For generations, the people of Lion's Arch were on the front line of the war with Zhaitan, the dragon of Orr. Their city was destroyed, only to be rebuilt in defiance of the Elder Dragon's power. The elite Lionguard built a fortress on Claw Island, a small body of land in the harbor, in order to defend against Zhaitan's attacks. No ship sails from their docks without a wary eye south toward the dark waters of the undead. They live each day with the knowledge that they are a bastion against the destruction that the Elder Dragon would bring—regardless of whether or not the other nations of the world recognize, or care about, their ongoing struggle.

For decades, Lion's Arch has been run by the Captain's Council, a committee of wealthy merchants and sea captains. Those who wish to take an active hand in the city's governance must prove themselves regardless of their race and heritage. They must be respected as a noted ship commander, and they must have contributed to the city's growth or health. If they are seen as a leader in the city, then they may purchase one of the seats on the Captain's Council—when one becomes available. This system of political governance leads to a great deal of one-upmanship among the local captains and on the council itself.

Section-stub. This key section of the article is incomplete. You can help the Guild Wars 2 Wiki by expanding it.
Reason: Add Season 1 lore about Mad King Thorn's invasion, Dragon Bash, murder of Theo Ashford etc.

In 1327 AE, after months of preparation, the arch-villain Scarlet Briar descended on Lion's Arch with all of her deadly forces. The city was razed and the smoldering husk of the proud port city was occupied, and it was weeks before the siege was broken. After days of battle, Scarlet was slain in the skies above the city aboard her airship, the Breachmaker.

Word of Scarlet's demise has spread like wildfire throughout the wards of the city. With renewed vigor, the heroes of Lion's Arch, the Lionguard, and Order forces have driven out the remainder of Scarlet's armies, their morale and ranks shattered. Cheers and celebrations erupted at the refugee camps and nigh across all of Tyria. All the while, the Breachmaker—the enormous airship looming over Sanctum Harbor—continued to drill uncontrollably before it mysteriously exploded a few days after hitting a magical leyline which was Scarlet's target. The resulting blast caused the pieces of the Breachmaker to be flung out across the city—mostly concentrated around the harbor but with debris landing as far out as the Farshore Ward and scarring the landscape. With the pieces being so immensely large, the resultant rebuilding of Lion's Arch was taking place around these seemingly immovable chunks of metal.

Section-stub. This key section of the article is incomplete. You can help the Guild Wars 2 Wiki by expanding it.
Reason: Add PoF lore about refugees etc.

Lion's Arch finished its rebuild in 1328 AE. Parts of The Breachmaker were molded into new metal used to build several new structures, such as an aerodrome, a fortress, turrets, a new harbor with a shipyard amongst others. Several points of interest also had their names modified or replaced. The previously destroyed waypoint in Fort Marriner was restored and is now usable. Many citizens and services were moved including those for guilds that are now at Guild Initiative Headquarters.

Lion's Arch is unique among the cities of Tyria since it is the central trade and cultural hub. It has features not found in other cities: