Chaos has come to Lion’s Arch and the culprits responsible for the mayhem have holed up in their hideout! Inspector Ellen Kiel spearheaded the investigation into the murder, and she’s now gathering teams of deputies to capture the perpetrator. Better sharpen your weapons and skills—this criminal promises to be a slippery eel!

Sky Pirates of Tyria was released on June 25, 2013. The culprit behind the attack on the Ship's Council has been identified as Mai Trin, but after being revealed she escaped capture with help from the Aetherblades. Now Inspector Ellen Kiel has found the Aetherblades' secret headquarters in Lion's Arch and is deputizing adventurers to help her bring the killer to justice. 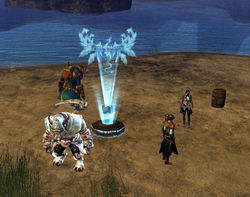 The Aetherblade want to steal the hologram technology.

The Aetherblades have become interested in the hologram technology used in the Hologram Projectors, and will sometimes appear when players approach them to steal it, forcing players to instead fight the Aetherblades.

The Aetherblades have hidden several caches of goods across Tyria, including some hidden within mini-dungeons and jumping puzzles, and placed guards at each location. Players can defeat the guards to reach the cache for extra chances at treasure.

The main base of the Aetherblade has been found. Accompany Inspector Ellen Kiel into the Aetherblade's hideout and defeat their leader and First Mate Horrik. This dungeon is available until July 9, 2013.

A second Aetherblade site has been discovered. Travel through this jumping puzzle and plunder the Aetherblades' treasure.

With the Aetherblade threat deflected, Magnus has plans for Inspector Kiel regarding the empty spot on the Captain's Council.

Discover all the plaques commemorating Cobiah Marriner. Speak to Cassin Hoppal to begin searching. This scavenger hunt is inspired by the plot of the book: Sea of Sorrows, and will grant you the History Buff achievement upon completion.