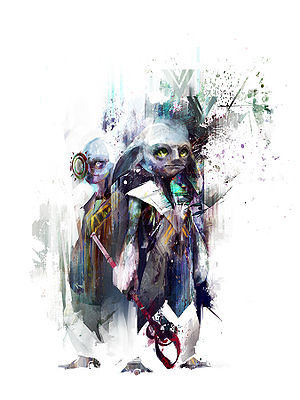 These alchemagical inventors may be short in stature, but they're intellectual giants. Among the asura, it's not the strong who survive, but the clever. Other races believe they should rule by virtue of their power and strength, but they're deluding themselves. In due time, all will serve the asura.

) are a race of diminutive artisans who secretly dwelt below-ground for thousands of years until the minions of the Great Destroyer forced them out of their underground homes in 1078 AE. Since then, they have adapted to surface life and quickly established themselves as one of the most powerful races in Tyria.

The asura are one of the five playable races in Guild Wars 2.

During character creation, a player can customize an asura's physical appearance and answer three race specific biography questions which affect their personal story:

Selecting an asura character will start players off in the tutorial Explosive Intellect where players stop the golem threat. After finishing the mission, they will appear in the starting area of Soren Draa in Metrica Province.

The asuran home instance is in the Applied Development Lab in Rata Sum.

By human standards, asura are very short. Described as only coming up to the belt of a human, an asura is usually between two feet ten inches and three feet eleven inches tall. They typically have slender builds, with the head, hands, and feet in somewhat exaggerated proportions. The head in particular is a wide, flat ellipsoid whose width is extended further by large, highly articulate ears which usually drop from the sides of the head. Asura eyes are large and come in a variety of colors; their size is the evolutionary result of being a subterranean race, as small frames can easier traverse their traditional homes in the depths. Their mouths are wide and filled with pointed, shark-like teeth. Asura typically have grayish skin and dark hair. Male and female asura are very similar in appearance; they are mostly differentiated by voice and ear structure.

In matters of childbirth and early development, little is known outside of the knowledge that asura give birth to live young in the same manner as humans (that is, they are placental mammals). According to an asura named Budge, a child's first words can come as soon as the day after their birth, however the player character's response alludes to the speech being infant babbling; but this does suggest asura are able to learn speech at a very young age. An asura will live 5-10% longer than a human, assuming no laboratory mishaps.[1]

The asura value intelligence and intellectual superiority over all other attributes. Individual asura will dedicate an entire lifespan to building a portfolio of successful projects or becoming the foremost expert of some tiny aspect of the arcane. They constantly seek to prove their own intellectual superiority, and by extension the superiority of the asura race. This typically results in asura being arrogant to the point of rudeness towards others, especially towards non-asura races. The asura have quickly established their intellectual and magical superiority over the other races and view them as useful primarily for heavy lifting, taking risks, and asking stupid questions.

Asura magical technology is second to none. Their experiments with magic are evident through the impressive floating structures found around and within their cities. Many asura study the difficult art of golemancy, and golems are often used for defense and general work. The golems' complete absence of intelligence and huge size complements the asura perfectly. The most important contribution of the asura to Tyrian society is the asura gate network which links many of the major cities of Tyria. To maintain this, they have retained a neutral attitude to all races.

The asura education holds three forms. First, children learn in small groups in labs within Metrica Province. When they're old enough, if they qualify, they join one of the three asuran colleges: The College of Statics, College of Dynamics, and College of Synergetics. Thirdly, asura will often study under mentors as an assistant; it's unclear when this takes place in the asuran education span, however. After graduation from college, asura typically join a krewe and a lab until they can become their own krewe leaders.

The asuran script, the asura's written language, is among the most used writing styles in Tyria. Though only used by asura who also use New Krytan, it is one of the parts of their culture that has remained unchanged since their surfacing from the Depths.

Asura have a strong sense of family and extended family, they affectionately refer to their children as "progeny" or "offspring". They also venerate their parents, and grandparents.[2] Asura traditionally cremate their dead. Asura tend to practice serial monogamy, in that they have a serious romantic relationship with only one other asura at a time. Most of these relationships are equal partnerships which often (but not always) have a firm, pre-determined end date. Most often, such relationships come out of two asura who fall in love with the same beautiful concept. These marriages of the mind produce rapid development of ideas, increased conceptual paradigms, and/or children. Relationships that break up tend to feature more fights about who gets the inventions than who gets the kids.[3]

The Inquest is a meta-krewe which believes that the Eternal Alchemy could be controlled and manipulated like any other machine. Members of the Inquest thrive on controlling power and knowledge, and their experiments are less ethical and more dangerous than those performed by other asura. They have no qualms about experimentation on sentient beings.

Rather than organized government, the asura prefer to utilize krewes: small, efficient task forces led by the most experienced member, designed to allow any individual asura to reach their maximum potential in any particular task. The asura also have a group known as the Arcane Council who are responsible for the mundane parts of asura city life. The members of this council rotate - membership into this council is granted by performing a task which benefits the asura as a whole. The role is rarely desired as it means an individual asura cannot spend time advancing one's own research.

An asura's name often consists of a short, sharp first name with one or two syllables. Feminine asura names typically end in -i or -a vowel sounds, but are not required to do so. Masculine names often end in a consonant sound. Both male and female Asuras often have two of the same letter in a row somewhere in their name, this being a cultural norm, but it is certainly not required. Asura do not have a last name, instead opting to use job titles, a krewe name, or honorifics to differentiate themselves. Those who choose to take a last name of a style similar to humans are rare and are considered eccentrics, and their surname is often ignored by other asura.[4]

The asura emerge on the surface.

Being paranoid and egotistical inventors and builders, the asura of old tended to protect their inventions and knowledge closely, often resulting in the loss of knowledge, and in turn history, when the individual died. Though this has changed in the past two centuries, little is known about the race before their surfacing outside of their regular contact with other underground races such as the dwarves, dredge, and skritt—the last of which they view as a threat. However, their asura gate network spanned the Depths of Tyria and the full asuran civilization. The asura had six grand cities on par to the modern Rata Sum, one of which was Quora Sum, and built many citadels over places of arcane power. One of these was the Central Transfer Chamber which housed the original network of asura gates and was built over the hibernating Elder Dragon Primordus. The network was powered by magic seeping out of Primordus, whom the asura mistook for a statue while it slept.

In 1078 AE, Primordus's dragon champion, The Great Destroyer stirred from beneath one of the asura's citadels and used the gate network to send swarms of destroyers throughout the Depths. The Great Destroyer annihilated much of asuran civilization, forcing survivors to the surface until its death beneath the maw of its hibernating master. Since then, the majority made a home among the magical ruins found on the Tarnished Coast where they quickly learned how to harness the magical energies to advance their research and establish foothold above ground. The asura were not fully pushed out of the depths, however, until Primordus' own awakening in 1120 AE when other subterranean races (particularly the skritt) were also forced out. Recently Durmand Priory researchers discovered the ancient asuran city of Rata Pten in Criterion Canyon beneath the Steamspur Mountains.

Now, few asura held any interest in returning to the depths. Instead, the asura have extended their network of gates, powered by different means, and waypoints across Tyria over the years, zealously guarding their advancements and demanding significant compensation for use of their devices, as well as enforcing their use for peaceful activities only (e.g. tolerating the building of a gate in Ebonhawke to transport supplies and troops there but not allowing any opposing group, such as charr, to stage an assault by using those gates). As such, they play a prominent role in most interracial dealings and travel.