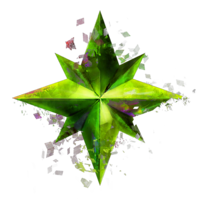 A green star hovers over the entrance to personal story instances

An instance is a copy of a game area which is created and maintained by the server for use by a small group of players. Those not in the group will be placed in a separate copy of the map. Players in separate instances from one another cannot see or interact with each other. Party members and guild members may still be visible on the world map.

Guild Wars 2 is mostly persistent and only uses instances for certain content.