This article is about the dungeon. For the region, see Fractals of the Mists (region). 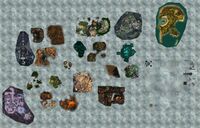 Fractals of the Mists are a special type of dungeon that consists of an array of mini-dungeons called fractals, where each fractal has its own story and environment. Characters are adjusted to level 80 within the fractal. Fractals are one of the primary sources of ascended equipment and provide materials for crafting infused equipment and attuned equipment. They are one of the core pillars of Guild Wars 2's endgame.

When entering Fractals of the Mists, the players arrive in Mistlock Observatory, a "hub" area within the Mists. Entering Mistlock, you'll meet Dessa, a scientist who has made explorable chunks of reality from the Mists. There are hostile elements that were acquired during Mistlock which you are asked to dispose of. You may begin by entering the portal within the Mistlock to enter a fractal. You will hear Dessa's voice while stabilizing the fractal. Once it is stabilized, she and her krewe will transport you back to the Mistlock.

Primary article: Looking For Group#Fractals of the Mists Category Mechanics 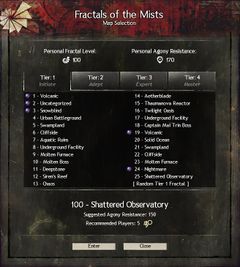 There are three types of fractal potions available: offensive (increased outgoing damage), defensive (decreased incoming damage) and mobility (increased movement speed) potions. These consumables stack up to five times (Large potions apply all five stacks in one use), and can be used in addition to nourishment and utility consumables. Depending on the Fractal Attunement mastery rank achieved, each potion may provide additional bonuses to vitality, toughness and concentration, respectively.

Completing a fractal grants a certain amount of fractal relics depending on the scale:

Completing a fractal grants a certain amount of fractal encryptions depending on the scale:

Each level of Mist Attunement acquired increases the number of encryptions dropped by 1.

Each level of Fractal Empowerment acquired increases the number of writs dropped by 1.