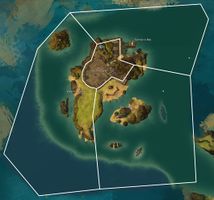 Claw Island is a stony fortress near the mouth of Sanctum Harbor. When Lion's Arch was founded, a small defensive fortification was built there, designed to keep enemies from sailing close enough to bombard the city's docks. It was the crowning jewel of the protection Sykox Steamshroud had planned for Lion's Arch, and the charr was understandably proud of it. The fortress took years to complete, but when it was done, it guarded the mouth of the harbor, providing gunnery posts and defenses as well as early warning when the Dead Ships came in force as they'd done at Port Stalwart.

The island fortress withstood countless Risen assaults, never letting more than a handful of Risen through. However, in 1325 AE, the Risen launched a large-scale assault that was led by Blightghast the Plaguebringer, one of Zhaitan's strongest dragon champions. The island was overrun, and Lion's Arch was at its most vulnerable ever until the Orders — the forces that would become the Pact — counterattacked and retook the island. Two years later, Scarlet Briar bypassed Claw Island's defenses by launching a land and air assault.