Zhaitan is the Elder Dragon of Shadow and Death, often referred to as the Undead Dragon, who raised the sunken nation of Orr from the depths of the Sea of Sorrows.[1] The name is known to the races of Tyria primarily via dwarven legends and, to the Durmand Priory, from the Scroll of the Five True Gods.[2][3][4]

Like the other Elder Dragons, Zhaitan is a creature of ancient times and little is known of its origins, though the Durmand Priory believe it last awoke around the time the Giganticus Lupicus were wiped out.[5] It feeds on magical energy to survive, using Mouths of Zhaitan to consume magical artifacts throughout Orr, while its most powerful servants, the Eyes of Zhaitan, bear their master's vision and carry out its will. Zhaitan's minions are known as the Risen.

Like the other Elder Dragons, Zhaitan is thought to have last awakened 10,000 years ago, around the time of the disappearance of the Giganticus Lupicus, and then fallen back into slumber from consuming all the world's available magic.[5] Some time during this dragonrise, the mursaat and the Forgotten joined forces and assaulted Zhaitan, only to fail miserably as the Elder Dragon proved to be too powerful an adversary for them to defeat without the assistance of other races of the time.

For more than a millennium, Zhaitan rested beneath the land that would become the Kingdom of Orr once humanity, which the Six Human Gods had brought to Tyria, had populated it. When the gods revoked the gift of magic back into the Bloodstone to split it into the familiar four schools in 1 BE, they tapped into the dormant Elder Dragon's energy and increased the power of magic in doing so, not knowing of Zhaitan's existence.[9][10] 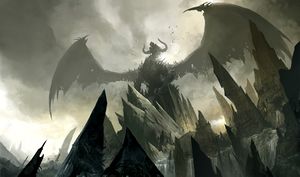 In 1219 AE, Zhaitan awoke and brought the lost nation of Orr, which had previously been destroyed by the Cataclysm, to the surface. Cobiah Marriner had witnessed the rising of Orr, seeing thousands of swarming Risen on the rising lands over a tidal wave later called the Great Tsunami.[11]

The Great Tsunami drowned thousands, sank hundreds of ships, flooded Lion's Arch and the Battle Isles, and dramatically reshaped the coastline of the Sea of Sorrows,[12] including Dajkah where the Olmakhan town of Atholma was destroyed.[13] Corsairs who took refuge docked in the shattered peninsula were wiped out, and in its place there came an undead navy of Dead Ships, manned by the Risen servants of Zhaitan. The black-sailed ships swept across the Strait of Malchor towards the Ring of Fire and the southern Sea of Sorrows, blocking sea access to Cantha and Elona, and beginning an age of isolation for Tyria.[12]

The tengu of the world saw the Great Tsunami as a sign to return to Tyria. It was a descendant of Talon Silverwing that led the charge through Risen forces while the clans set their differences aside to survive through the calamity.[14] When the tengu reached land, they built the Dominion of Winds atop the island once known as Sanctum Cay to defend against Zhaitan's minions,[15] and unified their clans into the four modern houses, one for each of the winds.[16]

Afterwards, the Elder Dragon sent Captain Whiting on the Indomitable to lead his Risen forces to decimate the most populated ports along the Sea of Sorrows, starting with Port Stalwart in 1229 AE. The Dead Ships assaulted Lion's Arch in 1256 AE, which ultimately failed with the deaths of Whiting and the Risen leviathan known as the Maw due to Cobiah Marriner and the asura Macha's interference. Sometime afterwards, Zhaitan's forces had decimated Port Noble. 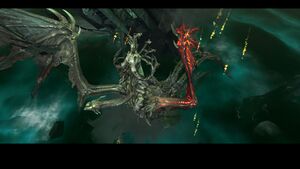 Zhaitan falling from the skies above Arah.

In 1325 AE, Zhaitan's lieutenants were seen leading Risen forces that advanced deeper into Tyria although each of the excursions were ended eventually. Despite these warning signs of increased dragon minion activity the scouting and raids were seen as isolated incidents, and Zhaitan was viewed as only a distant threat by most Tyrians.

After sending its Risen to scout vulnerable areas, Zhaitan's dragon champion Blightghast the Plaguebringer launched a surprise attack on Claw Island, defeating the Lionguard stationed there and readying an invasion on Lion's Arch itself. The Risen pressed on, attacking the headquarters of Tyria's three major orders of the Durmand Priory, the Order of Whispers and the Vigil, but were pushed back.[17][18][19]

With the Elder Dragon having proven itself a dangerous adversary and poised to rip out the heart of Tyria, the bickering orders pooled their collective resources and formed the Pact to retake Claw Island. The combined forces of the Pact, under the leadership of the sylvari Firstborn Trahearne, managed to defeat Blightghast and launch a counter-offensive into the Steamspur Mountains. The Pact eventually pushed into Orr where it systematically cut off Zhaitan's supply lines and thinned the dragon's troops, disposed of the Risen lieutenants and cleansed the Artesian Waters which were the Elder Dragon's major source of magical sustenance. The campaign eventually opened the pathway to Arah, the Fallen City of the Gods, where Zhaitan itself roosted.

The Pact airship The Glory of Tyria, incorporating engineering secrets of every race and crewed by the reunited Destiny's Edge and the Pact Commander, engaged the weakened Zhaitan in a battle above the skies of Arah and crippled it using the ship's MEGA-LIT cannon. As Zhaitan made its final stand, The Glory of Tyria bombarded it with special anti-Elder Dragon armed cannons which had been built using the research of Professor Gorr and several other knowledgeable individuals. The Elder Dragon fell to its demise, crashing on the eastern edge of the City of the Gods. 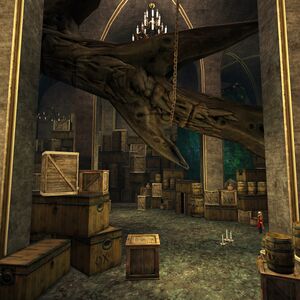 A piece of Zhaitan's tail kept in the Durmand Priory's Special Collections.

The magic released from Zhaitan's death dispersed around the world, empowering remaining Elder Dragons with the ability to make minions out of the dead, and even surviving Risen champions like Tequatl the Sunless began changing.[20][21] The Durmand Priory acquired Zhaitan's severed tail and took it to the Special Collections where it would be studied to find ways to combat the Elder Dragons.[22]

Mordremoth used Zhaitan's Death spectrum to create Mordrem clones out of corpses via the Blighting Pods and Blighting Trees in the Heart of Maguuma in 1328 AE when previously it had only been able to create clones out of living hosts.[20]

Since Zhaitan's defeat, the corruption of Orr began to reverse slowly. The Risen forces thinned but remained a threat, becoming known as Unchained as years passed and their strongest leaders were slain. While many of these Unchained became lost after the Elder Dragon's and its lieutenants' grip over them vanished, some continued fighting in their fallen master's name. Sylvari traveled to Siren's Landing in Orr to study the Unchained in hopes of reverting Zhaitan's lingering corruption, or, failing that, trying to redeem the dragon minions via other means.

Upon being empowered by magic released from the deaths of Zhaitan and Mordremoth, Primordus and Jormag began experimenting on Zhaitan's Death spectrum in 1329 AE by creating new minions such as Death-Touched Destroyers and the Unstable Abomination.[23][24]

After dying in the rogue god Balthazar's ambush in 1330 AE, the Pact Commander's soul appeared in the Domain of the Lost where all spirits which experience sudden, violent deaths end up in. While recovering their name and remembering their purpose to be properly judged, the Commander was subjected to fragmented visions of past deeds, including the campaign in Orr and the ultimate defeat of Zhaitan during which the slain Elder Dragon's memory was briefly visible.

Upon receiving magic from the deaths of Mordremoth and Balthazar, Kralkatorrik began using Zhaitan's Death spectrum to create new minions called the Death-Branded from corpses.[25] During the final battle against Kralkatorrik deep within his body in 1332 AE, the Pact Commander and the dragon Aurene fought against facets of the magic which the Crystal Dragon had consumed and which were tormenting him.[26] One of these facets was the Facet of Shadow and Death which was represented by the Eye of Zhaitan. Aurene sealed the facet upon defeating it and later consumed it upon Kralkatorrik's demise, taking Zhaitan's magic into herself.

Some of the magic from Zhaitan's demise had traveled through the Bitterfrost Frontier up to the Far Shiverpeaks and affected Jormag's champion Drakkar in Bjora Marches.[27] As the Ice Dragon's champion absorbed the magic from each slain Elder Dragon over the years, Jormag's whispers grew louder and began affecting people and wildlife in the region.[28] In 1332 AE, Jormag used Zhaitan's Death spectrum of magic to briefly reanimate the corpses of General Almorra Soulkeeper and the Fraenir of Jormag so it could speak through them.[29] However, the Ice Dragon was still experimenting with its new powers, so its puppeteering made the corpses move and emote in unnatural ways.[30]

Zhaitan's appearance is decayed and tattered, befitting of undeath. Its roughly dragon-shaped silhouette is formed by a twisting mass that branches into two major pairs of wings, flanked by secondary pairs attached to multiple slender tails that form its lower body. The lower jaw of its draconic head is replaced by a nest of small dragon-headed necks, and a sickly green light glows through its eyes and mouth.

For an Elder Dragon, Zhaitan is comparatively small. Its model is roughly four times longer than a dragon champion and is rivaled in mass by The Glory of Tyria, the airship that took it down. In comparison, Kralkatorrik's head alone dwarfs the Shatterer.

During the Pact's campaign in Orr, the Pact targeted key specialized minions in Zhaitan's army: the Eyes of Zhaitan and the Mouths of Zhaitan. The Eyes allowed Zhaitan to see far from its perch in Arah, and the Mouths were able to consume magical artifacts to feed the Elder Dragon. When an Eye was killed, Zhaitan would be temporarily blinded. When a Mouth was killed, Zhaitan would go hungry and would be weakened. Zhaitan's weakness was its over-reliance on these specialized minions, that would disrupt and weaken the Elder Dragon when killed.[31]