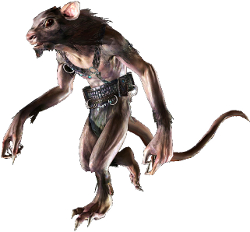 The skritt are small, rat-like creatures who come from deep beneath the surface of Tyria. Their group intelligence and incredibly fast reproductive rate makes them a target of the asura, who view them as a threat to all intelligent races.

The skritt are small omnivorous humanoids whose appearance is reminiscent of rats and bats. Male and female skritt are similar in appearance; any difference is only detectable for those particularly familiar with the race. The skritt are capable of rapidly multiplying—female skritt may give birth to litters approximately three to five times in their lives. These litters rapidly become self-sufficient and move out to live on their own.

Skritt communicate mainly using a series of swift, near ultrasonic chirrups and chitters. While this sounds like a buzz to human ears, the skritt have exceptional hearing and so can communicate a great deal of information in a short period of time. This may be the basis of their group intelligence; larger groups of skritt are capable of expressing a greater number of ideas and making a greater number of decisions in a shorter amount of time, so despite the short attention span of an individual skritt, a large group can collectively possess a formidable intellect, and a full-fledged colony can rival even the asura for cunning.[1] 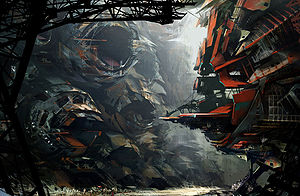 Skritt are opportunistic hedonists. They take what they can, when they can, and often pay in blood—but their numbers are enough to make up for these losses. They plan little and their tactics rarely extend beyond exploiting an opening when they see one. They are a naturally curious species, and in a large enough group they can eventually discover the nature and operation of any item they obtain—much to the chagrin of inventor races such as the asura.

Skritt value useful items and items they cannot create themselves above others, although in smaller groups they revert to a preoccupation with shinier objects, and will more often than not try to make anything they come across shinier. They understand material worth and will value newer or more technologically advanced items over others.

Skritt living conditions reflect their lazy nature. The only farms they run are those which require an absolute minimum of work to maintain, so they tend to prefer cooked meat and fungi harvested from underground. They prefer to live in large hollows or caverns, known as "scratches," using rocks and underground passageways to build a safe environment. They do have architectural ability, and build huts or structures within the main area of their hollow out of the items they scavenge. The high concentration of skritt in their scratches means they are at their most intelligent and most dangerous to any attacker.

There is no societal distinction between male and female skritt. Other species often have difficulty following a skritt in conversation. A skritt will often speak rapidly without specifics assuming the listener would understand them as another skritt would.[1]

The skritt do not appear to follow any particular religion, despite a natural empathy for the world around them. However, they believe in an afterlife called the Bright Hollow.[2]

The fragmented nature of skritt society means that they cannot be said to have any true form of government, but within a colony, the fastest speaker or 'passer of information' amongst them will inevitably become leader in any stable group. This leader is seen as primus inter pares and is allowed to make strategies and plans for the future of the colony.

A group will get together on a regular basis, often linked to the cycles of the moon, to share important information, discuss events of the past cycle and plan for the next cycle.

A colony of skritt may be intelligent enough to reach an agreement or treaty with another race, which they will honor as long as they are capable. However, if the group thins too much, these agreements might be forgotten and the skritt may act against their former allies.

If there is any center of skritt government and culture, it would be Skrittsburgh Center in Brisban Wildlands, which is the home of the Skritt King. Dry Top has another notable scratch ruled by Queen Chrii'kkt IV.

The skritt, like the asura, once dwelled in the Depths of Tyria and have spent much of their history locked in a genocidal war with the inventor race (although the asura see it as more of an extermination than a war).[3] When the Elder Dragon Primordus awoke in 1120 AE and the skritt faced the choice of fleeing to the surface or facing extinction in the following decades, they attempted to flee to the lands above.

For a while, it was assumed that the skritt had been another casualty of the destroyers, but, much to the dismay of the asura, small pockets of skritt that had become separated from the main group eventually began to appear on the surface, colonizing land across Tyria. Although their population was severely depleted, the skritt eventually spread across the continent and were well on their way to reaching their old numbers.

Since the re-emergence of the skritt, the asura attempted to enlist the help of the other races in exterminating their ancient foe once and for all. The charr were more than happy to oblige, whereas the humans and the sylvari were more open-minded to the possibility of an alliance.[1]

Following the joining of the three orders and the forming of the Pact against the threat posed by the Elder Dragon Zhaitan in 1325 AE, the skritt, out of all the mostly amicable tribal races, seemed the most inclined to enlist.

A large group of skritt were aboard airships that made up the Pact fleet that flew into the Heart of Maguuma to defeat the newly-awakened Elder Dragon Mordremoth in 1328 AE. After the fleet was taken down by the Elder Dragon's vines, most of the skritt landed within the Auric Basin. They quickly established a new scratch out of ship debris and were drawn to the glowing Exalted and shining structures within and surrounding Tarir, the Forgotten City. After the skritt ran into the local fungi, they made several attempts to domesticate them, which eventually worked as the skritt were seen accompanied by fungi during the Pact and the jungle allies' final assault on Mordremoth in Dragon's Stand.

Greets
What, what? whaat?!
Ya bring me something??

Disengage
You ran from skritt!

Greets
What, what? Whaat?!
Ya bring me something?
You smell ... (Sniff sniff) different!

Aggro
You're gonna get it, and I'm gonna give it to you.
Many skritts, help!
Quick, kill it!
I need some help!

Disengage
You ran from skritt!
That's right, you lose!