This article is about the area. For the achievement category, see Dry Top (achievements). 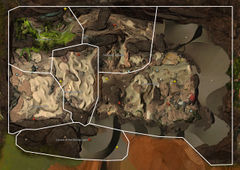 Dry Top is an explorable zone in the Maguuma Wastes. The arid wastes of Dry Top eventually give way to the Maguuma Jungle to the west. There has been a great deal of seismic upheaval in the region since it was last charted and as such Dry Top's climate is now harsh and prone to sandstorms. Travel within Dry Top is facilitated by using the three Aspects (Sun, Wind and Lightning).

Use the portal in the southwest corner of the map in Brisban Wildlands. The portal will be located southeast of the Tangle Root Outpost point of interest. (This area may be cut off until the Jungle Entanglement meta event is completed.)

The Zephyrites have provided Aspect crystals throughout Dry Top to navigate through the terrain. Interacting with each of the three types of Aspect crystals (Wind, Sun and Lightning) will cause the player to gain 10 charges for that associated skill. The Temporary Abilities effect will wear off after 15 seconds unless refreshed by picking up another crystal.

Geodes are a form of currency accepted by Zephyrite merchants in Dry Top. They are received as rewards for various events in Dry Top. The version of the inventory available from the vendor depends on which of 6 possible tiers of the Favor of the Zephyrites is active.

Most events in this area occur at specific times past the hour. For more information see the two meta event pages — Crash Site and Sandstorm! — or this overview page.