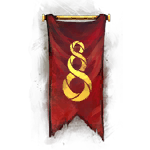 It doesn't matter where the dragons came from, or why they awakened. The secrets we discover will help us send them back to hell.

The Order of Whispers is a secretive ancient order with roots in Elona. They work behind the scenes to safeguard the world against the rise of the Elder Dragons and free and restore the troubled Elona. Its members, often spies, thieves and agents, operate within every Tyrian nation, sometimes to the highest levels. Their extensive network is able to gather information from everywhere, even areas blocked to travel, such as Elona which has long since been isolated under Palawa Joko's rule.

The Order of Whispers is one of three multi-racial orders which players join as part of their personal story. They believe there is no way to physically destroy or negotiate with the Elder Dragons so the only way to counter them is to find a way to send them back to sleep.

Like the other orders, it has a base inside each major city. Prior to the destruction of Lion's Arch, the order also had a hidden base in the sewers of the city.

Players may join the Order during their personal story at the end of the level 30 story mission. Joining the Order of Whispers leads you to work with Lightbringer Tybalt Leftpaw.

Spoiler alert: The following text contains spoilers relating to the personal story.
Section-stub. This key section of the article is incomplete. You can help the Guild Wars 2 Wiki by expanding it.
Reason: Flesh out more possibly? Add PS involvement

Formed by the elite bodyguard of Warmarshal Turai of Elona after the fall of Palawa Joko, they were tasked with keeping the undead lord sealed beneath the sands of Elona for eternity; however, it was necessary for them to let him escape so Warmarshal Varesh could be defeated.

They played an important part during the event of Nightfall in 1075 AE through aiding Kormir's ascension to godhood and helping maintain the Realm of Torment alongside the Forgotten.

Since then, Joko has returned and conquered Elona. Despite this, the Order has spread beyond Elonian borders, quietly expanding its ranks. They were the only group other than the dwarves to have any knowledge of the Elder Dragons prior to their awakening and worked to warn others of the Elder Dragons' awakening though they were ignored.

At some point during Joko's rule, a splinter group of the Order of Whispers known as the Order of Shadows formed because of differences in their ultimate goals.

The Order of Whispers has several ranks in its organization. 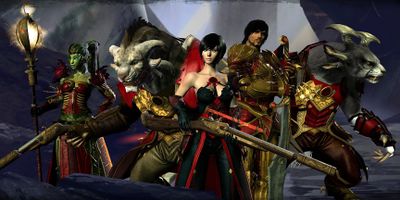 Welcome to the Order of Whispers.