Call it whatever you like—DPS, damage per second—we just call it DAMAGE, and when it comes to making red bars go down, you can never have enough of it. Don't trivialize it though; damage is a very versatile aspect of combat. There are so many ways that a character can do damage.

Damage is any effect from an action which results in a target losing health. Damage is considered to be one of the three facets the Guild Wars 2 combat system is built around, the others being support and control. All professions are able to deal damage in a useful way, mostly by using skills. Direct damage and Condition Damage are the two primary forms of damage. The term damage usually refers to direct damage in the game.

There are three types of damage in Guild Wars 2:

Outgoing damage is not affected by Health unless under the influence of a modifier such as a Trait with effects based on character's health or, uniquely, a Superior Rune of the Scholar set. In other words, a Player or NPC will often deal the same amount of outgoing damage regardless of whether they are at 100% health, 50% health or 1% health.

Base direct damage is given by the following equation:

This base direct damage can then be modified by the following effects:

Only successful attacks will cause damage. The following will prevent this:

Direct damage is listed on skill tooltips with the

Damage icon. Skill tooltip direct damage is given by the following formula:

The skill facts on this Wiki quote a standardized number for the direct damage associated with a skill at level 80. It is used in the following formula for direct damage:

The skill-specific coefficient is not shown in the game. It is computed as follows:

The Armor attribute (a combination of the Toughness and Defense attributes) is the primary source of damage reduction. All received direct damage is divided by this value. Incoming direct damage is further reduced by various percentage reductions from effects and traits. The Protection boon reduces damage received by the defender by 33%, while the Weakness condition causes Glancing blows from the attacker, which only deal 50% of their regular damage. 100% damage reduction (granted by some skills) will prevent all direct damage by reducing it to zero. Note that the attack is not actually blocked and can still apply conditions, control effects or trigger on-hit effects.

Condition Damage is not reduced by armor or most percentage reductions, but can be completely negated using the Resistance boon. The total damage received by conditions over time can be reduced by Condition Duration reducing bonuses, or by Condition removal skills and traits.

Damage reduction can also occur by preventing a hit from landing on the defender, using one of the following:

Skills that have outgoing damage reduction per hit[edit]

Weapon skills that have damage reduction per hit

Bundle skills that have damage reduction per hit

Utility skills that have damage reduction per hit

The damage done by conditions is governed by the character level, the condition inflicted, and the player's Condition Damage attribute. Unlike direct damage, condition damage is not reduced by armor or toughness. Players can increase the listed amounts by increasing the Condition Duration attribute via traits, equipment, or nourishments. 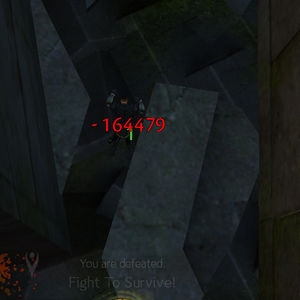 A fall from a sufficient height will instantly put a character into the defeated state.

A character that falls will take a percentage of their health in damage, based on the distance. The damage appears to scale exponentially, and the untalented maximum safe falling distance is around 1200 units. Landing in water negates fall damage, but invulnerability does not. Unless a character is already downed, dying from a fall will not damage armor. 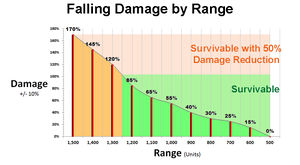 Nonfatal falls can still be quite dangerous in areas with hostile NPCs, as sufficiently long falls can cause characters to be knocked prone upon landing; this leaves the character vulnerable to attacks while recovering.

You can fall while attempting to navigate a slope, since it is more difficult to estimate the height and angle. Sometimes, instead of sliding safely down, a character can be inflicted by repeated short falls that are each far enough to cause falling damage, sometimes resulting in becoming defeated, even though individually the falls would not have been fatal.

In WvW and PvP, you can cause other players to fall by using control effects, such as fear and knockback, to move them over the edge, but NPCs will never fall off ledges.

Bug:
Sometimes after falling, your character may uncontrollably run off despite that your character is still facing flat on the ground. This bug causes disadvantages while going through jumping puzzles where platforms above falling pits are narrow.

Prior to the December 3, 2019 game update every profession had a trait which halfed falling damage and granted one or more other effects after falling.