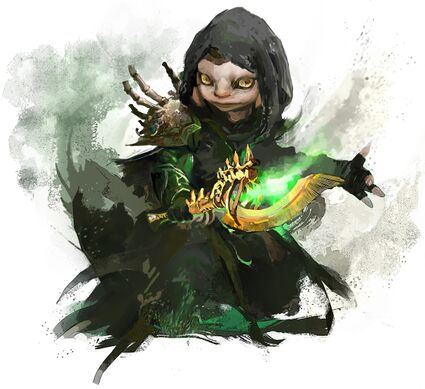 The scourge harnesses the power of the desert to summon sand shades onto the battlefield. While they lose many of the protective benefits of death shroud, they control the battlefield by afflicting foes while bolstering allies and granting barrier.

Scourge is an elite specialization for the necromancer unlocked with the Path of Fire expansion. Instead of using life force as a second health pool, scourges use it to command the desert sands with Shade skills, overwhelming their enemies in conditions and supporting allies with barrier. They manifest Sand Shades, extensions of their will that mimic any Shade skill they use. Scourges have learned Punishment skills, commanding the sands to corrupt their enemy's boons into conditions, eroding their will. They can wield torches as off hand weapons, lighting the path for their enemy's souls into the afterlife, burning away their bodies. Scourges combine damage dealing and support, corrupting boons from enemies, cleansing conditions from allies, shielding them with barriers, and drowning their enemies in the desert sands.

May the sands take you.

Scourges lose access to Death Shroud in exchange for summoning sand shades and using Shade skills at all times. Shade skills are fueled by a static cost of life force that does not scale with the total life force pool; increasing vitality does not increase the cost of Shade skills. All skills, except Manifest Sand Shade, have a half-second delay before activating. All Shade skills are cast around the scourge and any sand shade they have created. Traits that activate when entering shroud will instead activate when using Desert Shroud.

Scourges channel their life force into the desert sands to summon biddable shades that damage enemies and create shields for their allies. They use punishment skills to torment their enemies, and wield torches to light the path to their destruction.