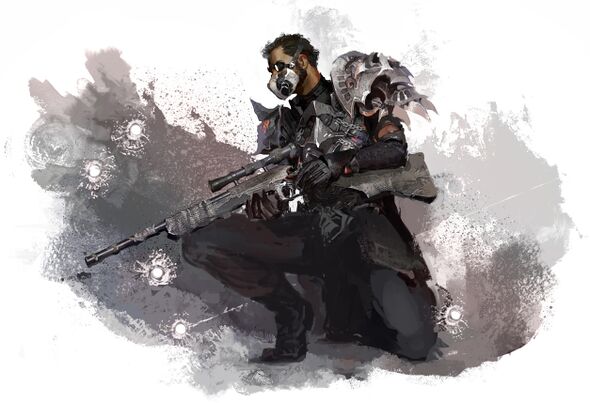 Take aim with your rifle and mark your enemies for assassination. The deadeye specializes in long-range combat and picking off enemies before they can get close. By marking your target, you gain increased damage against them as you wear them down before taking the final shot.

Deadeye is an elite specialization for the thief unlocked with the Path of Fire expansion. Deadeyes are guns for hire, using Deadeye's Mark to mark their target for assassination. They strike their target to generate Malice, and then consume it to empower their Stealth Attack. For this, Deadeyes learn cantrip skills, which provide defence and control, and stealth. They can wield rifles, picking off targets to snipe them one by one with deadly precision. They excel at damage dealing.

All I need is one breath and one bullet.

Deadeyes replace Steal with Deadeye's Mark. This skill marks an enemy for assassination, stealing some of its soul to create a Stolen skill.

Weapon attacks against Marked targets generate Malice, with each attack generating one Malice, or two if the attack is a critical strike. This malice is then consumed to empower Stealth Attacks into Malicious Stealth Attacks that deal more damage or are generally more powerful.

Mercenaries for hire, deadeyes stalk and mark their targets and generate malice toward them, increasing damage and harassing them with harmful effects. They use rifles for precise kills.