This article is about the profession. For other uses, see Warrior (disambiguation). 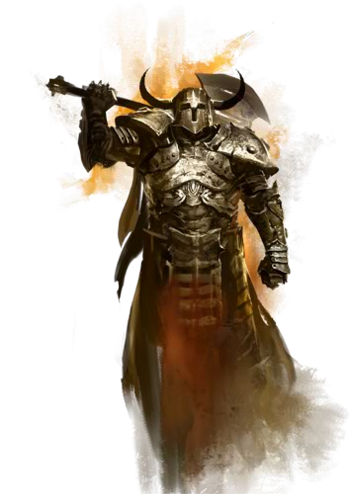 Warriors are masters of weaponry who rely on speed, strength, toughness, and heavy armor to survive in battle. Adrenaline fuels their offensive power—the longer warriors stay in a fight, the more dangerous they become.

Warriors are masters of physical combat. Their profession mechanic is adrenaline, a resource gained through the glory of combat that warriors then use to fuel a powerful burst attack unique to each of the plethora of weapons that they can wield. These masters of arms face their enemies head on, their formidable battle presence inspires their allies, while they are always looking for the next enemy to pound into dust. Like other soldier professions, warriors wear heavy armor.

berserkers, succumbing to their primal rage to go Berserk and overwhelm their enemies with Primal Bursts, going all-in on the offensive.

spellbreakers, master strategists able to fully counter their enemies' attacks, turning them against them, while removing their boons to ensure a fair fight and learning meditation skills.

bladesworns, wielding the deadly gunsaber to unleash a devastating unsheath attack at the speed of light to obliterate their enemies, and learn armament skills.

Adrenaline is the warrior's unique profession mechanic. As a warrior attacks, adrenaline is built up and can be spent on a powerful burst attack. Each weapon set has a single burst skill, which has a variety of different conditions that become more powerful depending on how much adrenaline the warrior has built up. Adrenaline has three power levels, each increasing the effect of the current weapon set's burst skill. More adrenaline can also provide the warrior with other improvements like increased damage or health regeneration, as shown in the skill's tooltip.

Warriors also have the highest selection of weapons to choose from compared to other professions, giving a good variety of play-styles to choose from.

Like the other two soldier professions, guardian and revenant, warriors wear heavy armor, which grants them high defense.This, coupled with warrior's naturally high vitality, makes them quite sturdy.

Berserker — Gains access to torches, a set of rage skills and berserk mode, which replaces the standard burst skills with primal bursts.

The warrior is a soldier profession and thus wears heavy armor.

There are 19 possible terrestrial weapon sets available to the warrior profession and two aquatic sets. The warrior can equip and alternate between two weapon sets, but, as with other professions, doing so in combat induces a short recharge to prevent continuous switching between weapons. This recharge can be decreased by equipping the Fast Hands trait once it is learned.

The following crafting disciplines can be used to create items that are useful to the warrior:

In the biography step of character creation, warriors must decide which article of clothing they wear on the battlefield to be respected, choosing from either of two helms or a pair of pauldrons. This choice is merely cosmetic and determines their starting shoulder or head armor, which can be hidden or transmuted after character creation.

Warriors are the bread-and-butter of the various armies throughout Tyria. They have long been masters of weaponry and raw physical prowess, though they also use magic as other professions do, including magical weaponry.[1] Amongst human warriors, Balthazar has often been worshipped as their patron god.