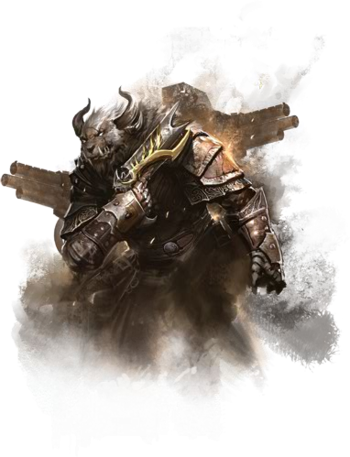 Masters of mechanical mayhem, engineers love to tinker with explosives, elixirs, and all manner of hazardous gadgets. They support their allies with alchemic weaponry, deploy ingenious inventions, or lay waste to foes with a wide array of mines, bombs, and grenades.

Engineers are technological and alchemical masterminds. Their profession mechanic is their tool belt, a second set of skills providing engineers with a plethora of options ensuring they always have the right tool for the job. They employ turrets, grenades, elixirs, gadgets and even wield their own Engineering Kits as weapons to overcome their enemies. As an adventurer profession, engineers wear medium armor.

holosmiths, using their Photon Forge to wield the very power of the sun into hard light weapons to cauterize their enemies and empower their exceed skills.

mechanists and build their own battle mech. The mechanist can use signet skills to benefit both themselves and their mech, while their loyal Mech can take on the offensive to crush enemies, or support the mechanist and their allies.

All skills provide access to their unique tool belt skill when equipped.

Explosives — Focuses on damage increase, dodging, vulnerability, and Explosions, including bombs, grenades, and mines. May enhance the Bomb Kit and the Grenade Kit.

Scrapper — Focuses on combat durability through barrier, gives access to hammer, wells, and replaces the fifth tool belt skill with Function Gyro, which can revive allies and finish foes on its own.

The engineer is an adventurer profession and wears medium armor.

There are four possible weapon sets for the engineer, the lowest amount out of all the professions, balanced by the high amount of skills engineers get from their tool belt and their Kits. Engineers use a harpoon gun while underwater. Engineering Kit skills benefit from the damage and attribute bonuses of the engineer's equipped weapons, including the weapon's sigils.

Access to the weapon swap mechanic when out of combat was added for engineers in the December 3, 2019 game update.

The following crafting disciplines can create items that are useful to the engineer:

In the biography step of character creation, engineers may choose their favorite tool. This choice is merely cosmetic and determines their starting head or backpack armor, which can be hidden or transmuted after character creation.

Engineering is a relatively new profession to Tyria, having been developed by the charr Iron Legion thanks to their technological progress within the past 250 years.[1] Although most of their abilities come from tinkering with technology and alchemy, they can also use magic as other professions do, including magical weaponry.[2]