Stun is a control effect that disables all skills and interrupts any current action. Stunned characters cannot move or activate skills, except those without an activation time, e.g. shouts and some signets. Stun breakers will restore one's freedom to act. The duration of stun does not stack. 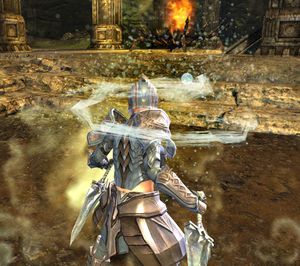 The Stun effect is shown as swirling white lines and dots around the head.

Skills that break stun cancel most control effects, including stun.

Skills that reduce the effects of stun[edit]

Upgrade components that reduce duration of stun on self[edit]